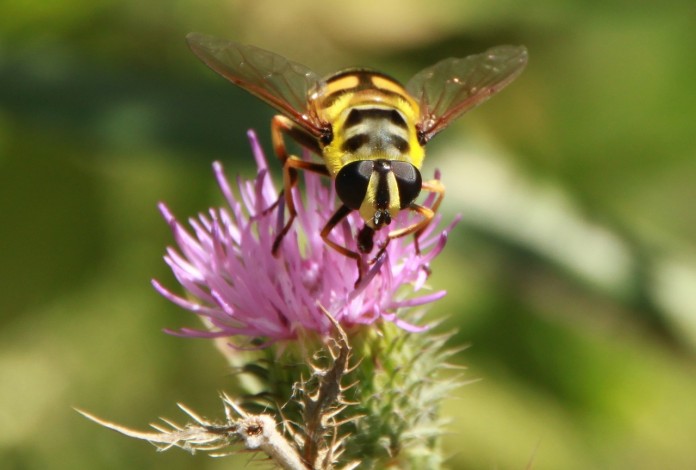 With September’s shorter days, come cooler temperatures. I promise, by the time you read this, I’m hoping there will be a chill in the air every night.

Cooler, shorter days also cause yellow jackets to become more active and aggressive. When provoked, they attack and sting aggressively.

Yellow jackets are active all summer long, yet unless a lawn mower runs over a nesting burrow, they’re rarely aggressive. But while tailgating before a football game or at a fall festival, yellow jackets can be a problem.

A belligerent yellow jacket on a cup of cider or beer can lead to a sting on the lip and ruin an otherwise perfect day.

The simple explanation is that the social structure of yellow jackets breaks down in the fall, and they get hungry.

Yellow jackets build their nests underground in abandoned rodent burrows. After the queen lays her first clutch of eggs, she collects food for the soon-to-hatch larva. Yellow jackets are predators, and any small insect is fair game.

She deposits some food with each egg. Upon hatching, the larvae consume the awaiting food and grow rapidly.

After the first generation of yellow jackets matures, it continues expanding the size of the nest and collecting food for subsequent generations of larva.

The queen then becomes an egg-laying machine and probably never again leaves the nest.

As yellow jacket social structure breaks down in the fall, the food supply dwindles, and the yellow jackets get hungry and ill-tempered.

In the event of a yellow jacket sting, remain calm. If the stinging yellow jacket is killed, it releases a chemical pheromone that triggers more wasps to attack.

Flailing and fleeing in panic will only result in more stings.

Remove the stinger, and wash the sting site with soap and water, then rinse with hydrogen peroxide. Ice eases swelling and pain, and a dab of ammonia relieves itching.

Over-the-counter antihistamines and pain relievers such as ibuprofen will also ease the symptoms of wasp stings. Anyone who experiences a whole body allergic reaction (hives, shortness of breath, confusion, swelling of tongue) should get to an emergency room immediately.

A more pleasant side of late summer insects is the music of the night they bring to our backyards.

Katydids also have extremely long antennae that arch backward over the length of the body. But the best way to recognize a katydid at night is by ear.

Males sing from early evening well into the night. The song is harsh and sounds something like “Ch-ch” or “Ch-ch-ch” or “ch-ch-ch-ch.”

The phrases are repeated about once a second, and the rhythm suggests the insect’s name: Ka-ty, ka-ty-did or kay-ty-did-did.

The singer of another familiar summer nocturne remains a mystery to most people. Snowy tree crickets generate a seemingly endless series of high-pitched melodic chirps that almost define a summer night.

It’s sometimes called the “thermometer cricket” — count the number of chirps in 13 seconds, add 40 and you have a temperature estimate in Fahrenheit.

Though not precise, these estimates are usually in the ballpark and are based on the observation that snowy tree crickets sing faster when temperatures are warmer.

Though often heard and recognized, snowy tree crickets are almost impossible to find without a diligent search. During the day they feed and rest in the foliage of trees and shrubs.

Thanks to their small size and cryptic pale green color, they blend in with their surroundings. And at night, their song has a ventriloquistic effect.

Shine a light where you think the tree cricket must be, and sure enough, it’s not. It takes good eyes, patience, and a little luck to find a singing tree cricket.

As we coast into fall, be beware of yellow jackets at picnics and enjoy the evening sounds of katydids and snowy tree crickets.