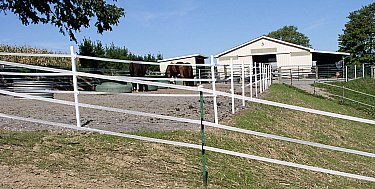 By now, nearly everyone that reads Farm and Dairy on a regular basis has heard of blue green algae and all the problems involved with it. And it’s easy for us folks in eastern Ohio to write it off as something that only happens in other places.

But think for a minute about what would happen if this summer it showed up in Clenndening Lake or Lake Milton or Pymatuning Reservoir, and it got so bad fishing was prohibited. Touching the water could make you sick, so swimming, boating, water skiing and jet skiing are outlawed too.

When all the surrounding bait shops and boat stores are affected and the local economy goes down the tubes during their busiest season, folks tend to get a little riled up.

That’s what happened at Grand Lake Saint Mary’s and the western part of Lake Erie in 2011. Excessive nutrients (nitrogen and phosphorus) were finding their way into the water and the algae spread like wildfire across the surface.

Although there were some other sources, the predominant land use upstream from the lake is crop production and some of those farms raise livestock in confinement, so manure and the phosphorus it contained received a lot of attention.

Before you dismiss it as only happening in “flat country,” it also happened at Blue Rock State Park in Muskingum County, as well as a handful of other places in southern Ohio that year.

There was a tremendous amount of research done and money spent on finding a way to fix the problems in those two lakes. But, the easiest way to fix it is to not let it happen again, and that’s why the Ohio Federation of Soil & Water Conservation Districts and nearly every ag commodity group are adopting the 4R Tomorrow Nutrient Management Program.

Jeff Van Loon wrote a couple months back about the program and how managing fertilizer applications can improve water quality: applying fertilizer from the right source — the proper “blend” to suit your crop needs — based on your soil test, at the right rate for optimum economic benefit, at the right time for the plant to use it effectively, in the right place for plant roots to absorb it.

If you read the Farm and Dairy and raise crops, and fertilizer is your biggest expense, then it only makes sense to use it wisely, and following the 4Rs can increase productivity and minimize the environmental impact of continuous cropping.

Combined with a good cover crop program, fertility and organic matter are increased and compaction rates are decreased. See Deb Bigelow’s article in next week’s Dirt on Conservation to learn more about all of the benefits of cover crops.

But what if you read the Farm and Dairy and don’t raise crops? If your farm is all hay and pasture and your commodity is feeder calves or lambs, are you exempt from such a program?

Sorry about your luck, but on a per acre basis, you may be having more nutrients escape than the crop guys are.

If you have a stream running through your pastures (like all of us do, because this is eastern Ohio) and along that stream is one or more big old shade trees, then every hot summer day when the cows gather to loaf there, they deposit hundreds of pounds of manure rich in nitrogen and phosphorus. If they loaf there every day, we’re talking tons throughout the summer and if they do it every summer … you do the math.

Rotating livestock through a series of smaller pasture paddocks is a proven way to help eliminate the nutrient stockpile. Instead, the manure is more evenly distributed over the entire pasture system. They might still loaf under that tree, but only for a few days per month.

And rotating is not just for summertime. Where we feed livestock throughout the winter can get pretty ugly this time of year, especially if you feed in the same area all winter long.

Feeding in different pastures throughout the winter means that some of those nutrients will be deposited for you in areas that you may not spread fertilizer. And better yet — although it depends on the weather — feeding hay in hay meadows recycles that nitrogen and phosphorus right back where it came from, reducing the need for commercial fertilizer.

If you want to feed less hay, or at least start feeding later in the fall, think about the timing of your fertilizer application. The vast majority of us spread only in the spring, when the forages need it the least.

Splitting applications into spring and fall is better for the root systems and applying nitrogen in early fall can give pastures a boost going into winter that may extend your grazing for a least a few weeks, maybe longer.

If you are considering a feeding pad to help keep your livestock out of the March mud, then consider things like the soil type in the area, slope and aspect (how it faces the winter sun), accessibility and especially distance from streams.

Your local Soil & Water Conservation District contact can help, and there may be some financial assistance available too.

As the world’s population keeps growing and we increase production to meet the demands for food, we also are being scrutinized for our methods more than ever before.

If this is the first you’ve heard about the 4Rs, then get used to the term, because it’s going to be around for a while. And think back to your childhood for a minute.

Life (and farming) is like the monkey bars — you have to let go to move on.

A testimony to the Ohio State Fair’s milking parlor

The sounds of not so silence