HOWARD, Ohio — While many farmers are struggling to make hay this year — due to all the rainfall — those who have grazing operations are seeing some benefits.

During a pasture walk July 21, Knox County farmer Greg Miller, and his wife, Bev, welcomed a couple dozen or so producers and conservationists to their pasture-based operation, known as Lone Pine Ranch.

“This year is a grazier’s year,” Greg said, as he led the group toward his lush green pastures. “We got a lot of water, and you should have a lot of grass.” 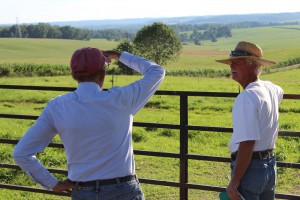 The Millers do have a lot of grass — and because of their elevation and the shale beneath the grass — most of their pastures have drained well and are in good condition.

They keep about 225 head of sheep on pasture, as well as some hogs, chickens and beef cattle. The sheep pasture is divided into paddocks and the sheep are rotated from one paddock to another, allowing sufficient time for each paddock to recover.

Greg and Bev first took the group to a paddock that had some nutrient and weed issues, followed by a couple paddocks that had been treated with a significant amount of composted manure.

The Millers compost their own farm’s manure in piles that are covered with a tarp, to prevent rain mixing with the manure.

The paddocks where manure was applied were noticeably more lush, and had a much more consistent stand of desirable grasses, with fewer weeds.

Greg said the composted manure has made a “night and day” difference in pasture quality, and said it’s also a good way to keep the manure close to the farm — and out of places where it might end up in streams and rivers.

He’s a proponent of good conservation practices, and said he believes the regulations put on farmers in the western Lake Erie basin should be followed by other farmers, as well — regardless of which watershed they farm in.

The Millers also try to mow their pastures at least once a year — and instead of baling up the grass — they leave it alone — to decompose back into the soil, and to form a mulch that helps protect future growth.

The tour was sponsored in part by the Coshocton Soil and Water Conservation District, the Ohio Heartland Sheep Improvement Association, and it drew conservation and OSU Extension staff from Knox and Coshocton counties.

Deb Bigelow, district administrator at Coshocton SWCD, said one of the things she appreciates about the farm is its diversity. In addition to all the sheep, the Millers also direct-market their hogs, chickens, eggs and beef.

“They are so diverse,” Bigelow said. “They’ve got a niche and they certainly make it work for them.”

Some of the meat is sold to the Kenyon Inn, a restaurant in nearby Gambier, and some is sold directly at the farm, as well.

Most of the sheep are sold at the United Producers livestock auction, located just west of Mount Vernon.

Bigelow said she also appreciate’s the Millers’ honesty — about things they’ve tried that work — and those things that have not worked.

“I like how Greg is willing to be so open with (his) information,” she said. “He’s not ashamed to tell you something that didn’t work.”

Greg half-jokingly told the group before the tour started, that if they came to find answers they would be disappointed.

He and Bev have farmed there since 1980, but each year is a new test with new lessons.

“Every year is different and every year will humble you at some point and time,” Greg said. “As things change in our farming operations from year to year, it brings about different questions.”

Miller is currently experimenting with different types of lime to apply, and when and how much. He keeps hand-written records of everything he does, and he read from his record book several times during the tour, to help answer farmers’ questions.

Some things that don’t change are the importance of good, clean water, healthy grass, and a proven breeding and lambing program. The Millers try to schedule most of the lambing for February-April, with the goal of being done by May.

They run well water to most of the paddocks, and follow a committed and proven worming program to keep the sheep healthy.

The farm consists of 107 acres, with each species kept separate from the other. The hogs and the cattle are pasture-based, but have access to separate wooded areas for shade and shelter, and the hogs have an outdoor hut that is bedded during winter.

The animals were noticeably calm — even around the many unfamiliar guests. Greg said one of his goal is to have tame livestock, and he works with them daily to get them used to people.

The Coshocton SWCD is planning another farm tour Aug. 18, at Neal Caldwell’s farm, located at 25371 County Road 193, Coshocton. Topics will include multi-species grazing with sheep and cattle, parasite control, and exclusion fencing.