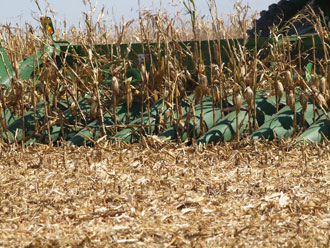 URBANA – Following wide swings in September and early October, the prices of corn, soybeans and wheat have traded in relatively narrow ranges in the last half of October.

Good said basis levels remain generally strong and are at a record for this time of year in some markets. Demand news tends to be mixed for corn, he said.

“Ethanol production since Sept. 1 has been near the level of a year ago, suggesting corn consumption in that market remains at record levels. Spot market margins for ethanol producers have increased sharply since reaching record low levels in June. Calculated margins are near the highs reached in 2007,” he said.

Declining corn prices and higher ethanol prices have both contributed to the improved margins. Ethanol production looks to be large for the next two months, with more uncertainty in 2012 after the blender’s tax credit expires, he said.

“The pace of feed use of corn is not known. Use should be supported by the large number of cattle on feed, but weekly placements of broiler-type chicks continue to run 6 to 8 percent under the level of a year ago,” he said.

Considerable uncertainty about feed and residual use of corn has been created by the surprisingly low level of consumption implied for the 2010-11 marketing year and by the unknown level of wheat feeding. The December Grain Stocks report will shed more light on that issue, he said.

The Census Bureau will release an estimate of September exports on Nov. 10.

Export sales have been large so that cumulative export commitments stood at 806 million bushels on October 20, that’s 25 million larger than commitments of a year earlier, he said.

“China has purchased 78 million bushels of U.S. corn. That is equal to the USDA projection of Chinese imports from all origins this year. Although the level of outstanding sales is encouraging, small sales in the week ended Oct. 20 and recent announcements that several importers are buying corn from other sources has created some concern about the strength of export demand for U.S. corn,” Good said.

“Prices have been pressured by the slow pace of domestic crush, generally favorable weather conditions in South America, and a modest pace of exports,” he said.

The USDA forecasts that exports this year will be 125 million less than the record of last year. The pace of exports and export sales are slow compared to the torrid pace of a year ago, he said.

“Last year, two-thirds of U.S. exports for the entire year had been sold by late October, as China was a large buyer early in the year. Over 40 percent of the total marketing-year exports were shipped in the first quarter of the year and only 7 percent in the last quarter of the year,” Good said.

Although trailing last year’s pace, export commitments as of Oct. 20 accounted for nearly half of the USDA’s projected exports for the year. That compares to the average of only 42 percent for the five years from 2005-06 through 2009-10, he noted.

Prices have been pressured by large production in the rest of the world, forecasts of much smaller exports, and prospects of abundant year-end stocks, Good said.

“The USDA projects 2011-12 marketing-year exports at 975 million bushels, 314 million less than exported last year. Exports during the first quarter of the year (June through August) were 30 million bushels larger than those of a year earlier,” he said.

The USDA projection then implies that exports during the last three quarters will be 344 million bushels (33.6 percent) less than those of a year ago.

“Exports are clearly slowing in the face of large foreign crops,” Good said.

Crop prices received some brief support from the aversion of a financial meltdown in Europe, but concerns about global economic conditions continue.

The USDA’s Crop Production report on Nov. 9 will provide updated forecasts of the size of the U.S. corn and soybean crops. Unless those forecasts are lower than expected, crop prices may drift back to the lows established in early October, he said.