About five years ago, when I was in the process of buying my first house and trying to watch my spending, I decided that I could save some money by replacing store-bought meat, with deer venison. I was already a hunter, so instead of giving away the deer that I shot, I decided to have the meat processed and keep it for myself.

That was five years ago. Today, I continue to keep the equivalent of a deer or two in my freezer, not only for the financial savings, which are considerable, but also because deer meat is a healthy and lean choice — and I like it.

Some hunters process their own meat, but I take mine to a local meat shop, where the carcass is cut into steaks, roasts, chops, and ground meat — similar to what you would get from a beef animal — but a lot less meat.

The packages are all vacuum packed, and I have the peace of mind in knowing that everything was done by a professional meat packer.

Some years, I also have part of a deer made into rings of bologna. This makes a good snack item, a good sandwich item, and a good gift. This year, I gave rings of bologna to three of my neighbors, and I’ve taken several additional rings to carry-in meals, as a quick and easy dish to prepare. I just slice the bologna into quarter-inch pieces, and spread them out over a clean white plate. If it’s a smaller group of people, I leave part of the ring wrapped, to keep it fresh.

Because it is deer — and some people don’t care to eat deer — I make sure they know what it is. Usually, though, the bologna is a success and there’s nothing left to take home.

The other cuts of deer, like the roasts and the ground deer — I eat almost exclusively at home. In the cooler months, I cook the roasts and tenderloins, and in the warmer months, I grill burgers and steaks. I usually cook the roasts in a slow cooker, burying them beneath crushed pepper, onions, garlic, cream of mushroom soup, soy sauce and Worcestershire sauce. I let them cook most of the day, and by evening, the roast is nice and tender, and I have plenty of leftovers for most of the week.

This time of year — when it’s still fairly mild outdoors — I do a lot of grilling. My favorite is to simply take a one-pound package of ground venison and make it into four or five burger patties, cover them with seasoning and drop them on the grill. It takes very little effort, and I never get tired of a good burger.

Other times — when I don’t feel like grilling, I fry a one-pound package of ground venison over the stove, and mix it in with a pot of spaghetti or even Sloppy Joe Sauce. This helps to tame the “gamey” taste that people often talk about with deer meat, because when it’s mixed in with sauce and pasta — you don’t notice it as much.

And that brings up a good point about deer meat. Some people say it tastes the same as beef, but from my experience, deer usually has a slightly stronger taste. And, depending on the cut — it’s usually not as tender.

But don’t give up on deer just yet. You can overcome that “gamey” taste, not only by mixing the meat with seasoning or sauces, but in several other ways. First, if you’re bothered by strong tastes — harvest only the does. This is another point of contention, but from my experience, a young doe always tastes better than a mature buck.

Secondly, you can also have the butcher shop mix, or blend other meats with the venison, like ground pork, for example. This is a common practice, and helps improve the flavor. Some years I have pork added, and other years I eat pure venison. 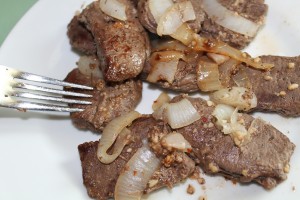 I can eat it either way. And either way, I’m saving a lot of money over the $4 per-pound ground beef in the stores, and the $13 steaks. And, I can prepare and eat deer most of the same ways that I would prepare beef.

Of course, if you’re new to hunting, or thinking about taking up the sport in order to have your own meat, you also need to consider the cost of the firearm, ammunition, and everything that it takes to hunt. But if you already hunt — or if you know someone else who hunts and wants to give away their deer, the meat can be a healthy, cost-efficient alternative.

Some recipes to try:

2. Some marinade tips and recipes.

Meet the next foodie!
Sign up for
Around the Table.