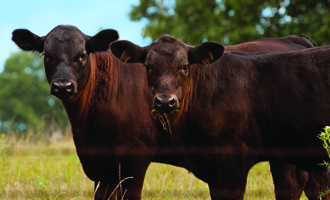 Right now, it’s hard to imagine how future tools will change the beef cow herd. Today, heifer development costs are high and getting higher as ranch profit goals demand efficiency while consumers want quality. DNA technology is one of the emerging solutions for beef production, in line with the role it has played in agronomy.“It takes so much time to develop a herd of cattle — a lifetime, honestly — that’s designed to be feed efficient or have high reproduction,” says Cody Jorgensen, of Jorgensen Land and Cattle in Ideal, S.D.“The more knowledge you have about DNA to help you make the right decision, the better.”Jorgensen’s family has DNA-tested standout Angus bulls and donor cows for years, but he plans to step it up a notch this fall.“It’s going to be a tremendous tool to add, along with the quantitative genetic research that we do,” Jorgensen says.

And although the registered cattle world will be quicker to use the tool, he says the new lower-density, lower-cost tests “could impact commercial cattle heavily.”

“Data is a power,” he says. “You get a lot of cost and time and energy stuck into a bred female, and every day that it may be in the wrong group, it’s very expensive. If a guy knew early in a calf’s life if it had the abilities we want, it would definitely improve the costs of raising replacement heifers.”Larry Kuehn, geneticist at the USDA, Agricultural Research Service, Meat Animal Research Center in Clay Center, Neb., says DNA is the best forecasting tool available right now for young calves.“It basically helps you skip time,” he says. “You’re trying to increase your accuracy earlier. It’s potentially cheaper to pay for a test to increase accuracy when a bull is born, for example, versus waiting for it to be ultrasounded itself, and especially waiting for it to be progeny-tested.”

“With some of the very early DNA tests, we were using individual genes or individual markers and in many cases they didn’t account for very much of the genetic variations.”Researchers streamlined the process when they began looking at changes in the DNA sequence — or “snips” (from single-nucleotide polymorphisms, SNPs) — and how they impact specific traits. That’s when the 50K tests were born, looking at 50,000 of these snips.Scientists hope that even higher-density tests and genome sequencing will allow them to find “functional mutations,” the specific points of differentiation from one animal to another. That will be important in trying to apply DNA tests across breeds, Kuehn says.The accuracy of the high-density tests improves confidence in more basic, less-expensive ones that draw on a reduced number of snips. An example is GeneMax, from Certified Angus Beef LLC, that evaluates gain and grade potential in commercial Angus cattle.Today, DNA works especially well in predicting carcass traits.“The genetic correlations derived at AGI suggest that 30 percent to 40 percent of the variation within a given carcass EPD is explained by available genomic tests,” Kuehn says, adding that there are other profit-related traits of interest as well.

“Just a few percentage changes in fertility would have a much higher impact in whole-system profitability than most of these carcass measures we’re talking about,” he says.The Angus breed is working on measuring longevity and survivability currently.“Once you get data and ways to measure traits like that, then a DNA test is soon to follow,” Bowman says.Jorgensen dreams of a system similar to what has shaped the crop side of their business.“If we could genetically select for all the things that challenge us — if that’s the fescue grass or the elevation — if we could understand DNA that could handle that type of environment or that was resistant to respiratory disease — just imagine that. It would be a game changer.”

E. coli resistance. Fertility. Ability to handle “hot” rations. Tests for these traits are all on the horizon.

“Any places we can increase efficiency by selling one more calf, because we have one more fertile female,” Kuehn says, “or have one more calf sold for slaughter because he made it through the feedlot without respiratory disease, or fewer food-borne pathogens are advantageous — those sorts of changes are a boon for the industry in terms of perception and environmental footprint.”Jorgensen has been pulling DNA samples for their files, “just in case” they want to analyze them.“It’s not like the poultry or swine business where they can do 2.4 turns per year,” he says. “You just can’t make that much progress in a year’s time. It’s critical to know whether those cattle will do it or not.”It matters to individual ranchers and to those further down the beef production chain.“Meat demand is not going down, especially worldwide, Kuehn says. “It’ll take focus if we’re going to keep beef competitive to other protein sources.”