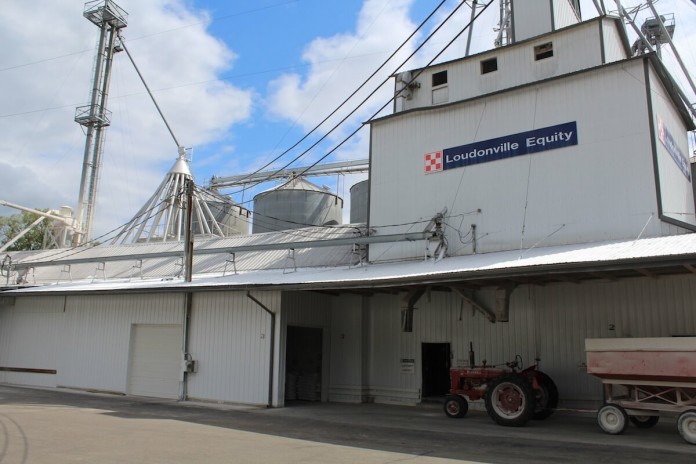 LOUDONVILLE, Ohio — In an era defined by mergers and consolidation, it’s rare to find a small-town, farmer-owned feed mill that has survived the test of time.

This year, the Loudonville Farmers Equity, of Ashland County, is celebrating its 100-year milestone. The mill was started by a group of farmers in July 1915, and continues as a farmer-owned cooperative today.

The values and traditions remain the same — but like other feed mills — the mill has had to change and evolve to stay competitive.

“It’s changed dramatically, just because of the technology and everything that’s gone on with (farming),” said Roger Stitzlein, the mill’s manager since 1978. “So for us to survive, we’ve had to change with it, and it’s always the challenge of keeping up … with the farmers.”

In addition to mixing and delivering feed, the mill now offers custom planting, spraying, fertilizer application, and rents about 100 different pieces of equipment to area farmers.

As equipment gets bigger, so does the need for more space.

In 2009, the mill built a large, 300-by-70-foot machinery storage building to help accommodate the new equipment, and to store additional seed and fertilizer.

“We’ve grown so much and you just got to get this inventory in earlier and earlier,” Stitzlein said. “You only sell seed corn and fertilizer once a year, and you’ve got to have it when (farmers) want it.”

When he started as manager in 1978, the mill had $2 million in sales a year. Today, it’s about $15 million, he said. And the mill is serving a broader area — about a 25-mile radius today, which includes parts of five counties.

Stitzlein was just 25 when he was appointed manager of the mill. But he was no stranger to agriculture and hard work.

He grew up on his parents’ general livestock and crop farm, and completed an ag economics and business degree at Ohio State University. He then worked about three years at the Agricultural Technical Institute before accepting the top position at the mill.

Stitzlein said he didn’t intend on returning to Loudonville. The family farm was too small to support all of his siblings, and he was on to something else.

But then he got an offer to do something that was at least farm-related and only four miles from the family farm.

“I always wanted to be a farmer, but I had four brothers and we all wanted to farm,” he said. “This is as close as I can be to being a farmer, and I get Sundays off.”

While he may get Sundays off — at least most of the time — the mill is very much an around-the-clock job.

Stitzlein has a full-time staff of about 17 people, and he relies on them to be responsible for their own department.

“My thing is keep me informed, if you need me let me know, but I’m not going to go over there and tell you how to do your job,” he said. “If I have to do that, then I’ve got the wrong person.”

It’s that same management style that has kept many of the same employees over the years. The average employee has 20 or more years with the mill, with three who have been there more than 30 years.

“He puts the responsibility on those guys,” said Bob Rooks, dairy farmer and current board president. “He treats them well, and they’ve got responsibility.”

Rooks and his family farm near Perrysville and have been customers of the mill since the 1940s. He said he appreciates the mill because it provides a local resource that is close to home.

“It’s been excellent (to have) a small town co-op like that,” Rooks said. “It’s been good for the community and the farmers, especially.” 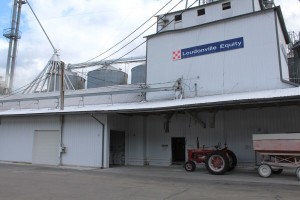 As farm equipment becomes more specialized and more costly, the mill is able to provide services that farmers often cannot afford on their own.

“We’re trying to help out the small and medium-size farmers. And this technology — you can’t afford it if you don’t cover a lot of acres,” Stitzlein said. “We can spread that cost out and then they (farmers) can have all the newest technology.”

While Stitzlein serves as manager, the mill is run by a five-member board, and is owned by all of the farmers who hold stock in the company. The board meets monthly and approves the larger purchases and decisions.

The biggest trend Stitzlein sees is fewer farms — but larger farms. This leads to increased demand for custom services and also more competition. The sprayers, planters and tractors are all getting larger, and the mill has to keep up with the trend if it wants to be competitive.

He said some farms have gotten so big that they now buy directly from the supplier, cutting out most of the mill’s services. But he tries to keep the loyal ones coming back, with dependable service they can count on.

Stitzlein said when they do their budget at the end of the year, they always report their top asset as “the people.”

U.S. Rep. Bob Gibbs, who served 12 years on the board and was also a board president, said the people are what have led to the mill’s success.

“The lesson I learned is the staff is critical and providing quality, timely service is essential,” Gibbs said.

A former hog producer near Lakeville, Gibbs said he’s proud of how the mill has grown and continues to provide services to the ag community.

Stitzlein said farmers can sometimes be critical of the mill — in terms of its pricing or business decisions. But, he said, like other businesses, it has to follow the market and be profitable.

The mill has had to make several difficult decisions over its years, including closing its Lakeville branch in 1996. The Lakeville mill had been part of the Loudonville mill since 1925, but the costs to maintain it and transport grain between the two locations became too high, Stitzlein said.

And there are day-to-day decisions — about seed and fertilizer prices, and discount schedules for grain, and it’s hard to please everyone, although Stitzlein said he does try.

This year’s wheat crop was one example. Stitzlein said the mill did all it could to take farmers’ wheat — issuing some steep discounts in the end. But he said it also took the mill more labor and manhours to get rid of all the wheat it bought, because it was poor quality and of low value.

Looking ahead, he sees more growth for the mill, as it continues to offer custom fieldwork and livestock nutrition, as well as traditional services like custom mixing of feed.

“I think they (farmers) really want it,” he said. “I’m hoping we’re adding a value.”