SALEM, Ohio — October appears to have been a slower month for the number of shale drilling permits issued by the Ohio Department of Natural Resources.

In Harrison County, there are 123 wells in some sort of drilling phase as of Oct. 31, according to the ODNR.

The ODNR issued seven permits in Noble County during October. All seven of the permits were issued to PDC Energy for a well site in Seneca Township. Four of the well holes are already being drilled.

The ODNR reported there are 44 producing wells in Noble County and 65 remain in some form of drilling phase.

In Monroe County, the ODNR issued five new permits to Antero Resources Corporation for a well site in Seneca Township.

To date, there are 27 producing wells in Monroe County and 68 remain in the drilling phase.

The ODNR reported there are 65 other wells in some sort of drilling stage and 34 producing wells. 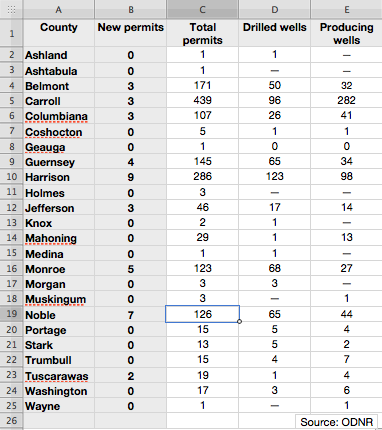 The ODNR issued three permits each in Carroll, Belmont, Columbiana and Jefferson counties.

In Columbiana County, the permits were issued in Salem Township to the Hilcorp Energy Corporation. The ODNR reported 41 producing wells and 26 drilled wells.

In Carroll County, two of the permits were issued in Harrison Township to RE Gas Development, and one in Perry Township to Chesapeake Exploration.

So far, there are 439 total permits issued in Carroll County. Of those 439, there are now 282 producing wells and 96 either being drilled or having been drilled waiting for pipeline construction.

In Belmont County, the ODNR issued three new permits in three separate townships — one in Smith Township to Rice Drilling, one in Richland Township to XTO Energy Inc. and one in Somerset Township to Gulfport Energy Corporation.

There are 32 producing wells now in Belmont County and 50 drilled wells, according to the ODNR.

The ODNR reported there are 17 wells either having been drilled and awaiting pipeline construction or being drilled. There are now 14 wells producing in Jefferson County.

According to the ODNR, there are four producing wells in Tuscarawas County and one wells is being drilled by Enervest Operating LLC.

So far, 1,581 horizontal drilling permits for Utica shale wells have been issued by the ODNR and 1,148 have been drilled.

In addition, there are 14 wells in some sort of drilling phase in Monroe County and one in Belmont County.

The ODNR has issued 44 horizontal permits and a total of 27 Marcellus shale wells drilled.

Pennsylvania. The Pennsylvania Department of Environmental Protection issued a total of 263 unconventional well permits during October. Of those 263 wells, there were 204 permits issued to drill new wells and 55 were to drill deeper.

The DEP also reported there were 39 permits drilled in Washington County in October and 31 in Greene County.

Three permits were issued in Beaver County in October by the DEP.

The DEP has issued 39 total permits during 2014. There were no wells drilled in October, according to the DEP.

The DEP issued 10 permits during October in Butler County. So far, the DEP has issued 160 permits since the beginning of 2014.

A total of six shale wells were drilled in the county during October.

In Lawrence County, the DEP issued four new permits during October. The DEP reported there were 86 permits issued since Jan. 1, 2014.

Meanwhile, The DEP reported there were four unconventional wells drilled since Oct. 1.

The DEP issued four new permits for new wells during October. So far, the DEP has issued 41 permits here since the beginning of 2013. There were no wells drilled during October.

In the Farm and Dairy circulation area, permits were issued in Marshall, Wetzel, Tyler, Monongalia, Doddridge, Harrison and Marion counties.

In Marshall County, the West Virginia DEP issued nine permits. Seven of the permits were issued to Chevron Appalachia, one to Chesapeake Appalachia and one to Noble Energy Inc.

In Wetzel County, there were nine permits issued during October. Four of the permits were issued to Stone Energy Corporation, four to Gastar Exploration Inc. and one to Chesapeake Appalachia.

The DEP issued a total of four permits for Tyler County sites in October. Two of the permits were issued to Antero Resources Corporation and two to Noble Energy Inc.

Two permits for new Marcellus shale wells were issued in Monongalia County. The permits were issued for the same property to Northeast Natural Energy.

The West Virginia DEP has issued seven new permits in Harrison County during October. The permits were issued to XTO Energy Inc. for wells to be drilled on one single property.