SLIPPERY ROCK, Pa. — Dan Hartzell may be the fifth generation to farm his family’s land, but he says it’s his work and education that is going to take it to the sixth generation. 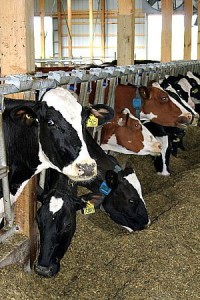 His family’s farm, Meadow Grove Farm in Slippery Rock, Pennsylvania, is milking 165 cows and farming 525 acres. It dates all the way back to 1894.

The farm is currently managed by Dan’s father, George Hartzell, and his uncle, Steve Hartzell. However, Steve is retiring this year after partnering with George for more than 30 years, and the time is right for the next generation to join the operation as a partner.

While the family history is strong, it doesn’t mean Dan Hartzell was just given the reins.

Hartzell said he knew what he wanted to do in sixth grade, but he also knew it would take hard work.
“My grandpa always said, ‘do it for your own personal satisfaction,’ and I feel the same,” as Hartzell talks about the family farm.
His grandparents, Duane and Leah, are no longer living on the family farm and have moved into a nursing home.

Hartzell comes from a long line of dairy farmers. Not only did his dad, George, come from a dairy, but his mom, Kathy, was also raised on a dairy farm. She has been employed with Ag Choice Farm Credit for 35 years.
“Our roots are very deep in agriculture,” said Kathy.
She said her and George have shared a great passion for the dairy business over the years and see a great future for their farm.
“The dairy business has been very rewarding for us and our family, and we want to make sure it gets passed on,” Kathy said.

She said there are good resources in Pennsylvania for dairy farming, and there is a good market for the milk.
She said the decision to make Daniel a partner was easy for the family. The family has taken the opportunity to improve the dairy over the years, and through a long process, they have developed a strong farm, which lets them help Daniel get into the business.
Kathy said the family often discuses the need for a sound farm business foundation, particularly with the number of farmers selling out or farms being sold to developers.
“Once farms go out of production, it’s permanent. There is no going back and we didn’t want to see that happen,” said Kathy.

She says Dan has a balanced approach to dairy farming and that’s important to the farm’s success.
“He understands everything that it takes to make a dairy succeed,” she said.
By “everything,” she’s talking about the herd’s reproduction, health management and feed, which all have to be balanced. She said Dan also knows that agronomy has to be a big part of the farm and that the barn can’t be full of show cattle. There has to be a plan for the farm management, and Dan has that.

Dan is optimistic about the dairy industry and feels that a herd expansion will have to part of his plan.
The Hartzell family broke ground for an addition to the freestall barn last fall and wrapped up construction this spring. The goal is to increase the herd to 300 Holsteins but, like everything in life, it takes time. 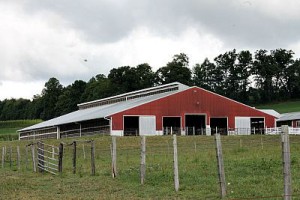 Hartzell said the farm was last updated in 1997 with the construction of a freestall barn and a double eight herringbone parlor. The newer facility will accommodate today’s heavier, taller Holstein cow, and features larger headstalls. 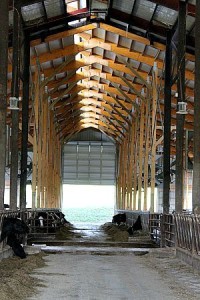 The barn also features laminated beam construction.
When the update started becoming more than an idea in 2014, they considered purchasing a robotic milker, but decided against it for one reason: They want the day-to-day management of the herd and don’t want to rely on machines, Dan said.

However, the farm did opt for a BouMatic sort gate, which can be operated by a milker with a keypad as the cow leaves the milking parlor. 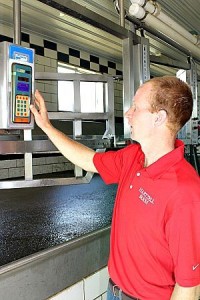 The addition also allows more one-on-one care for those that may need a little more attention. He said the sort gate allows the Hartzell family to focus on individual cow health and it allows those milking to focus on each lactation.
Hartzell said when the cows are finished with milking, they can go straight into a special needs pen or breeding pen.

“It’s like having another man in the barn,” said Hartzell. “It’s nicer for us and them. It’s all automated and is a pretty handy tool.”
Hartzell added that better cow management means a better bottom line.
Activity monitors were installed in 2012 that help to detect heat, and Hartzell said he has found them to be 90 percent effective, if not better.
“In reality, we are in the fields, so it helps us to know what is going on in the barn,” said Hartzell.
The family milks twice a day. They do employ one full-time hired person and two part-time milkers, but rely on family for the majority of the farm labor.

Another change in the Hartzell barn in 2015 is new LED lighting. Hartzell said his idea was to lengthen the amount of light available in the barn.
The increased light in the barn means more time at the feed bunk, which turns into more milk produced. So far, Hartzell has already found an increase of 1 or 2 pounds of milk produced a day.
Hartzell said one of the most rewarding — and most challenging — parts of the dairy business is the calves.
“Calves are the most enjoyable part, but the biggest struggle. You have to remember they are the future of the herd,” said Hartzell.
Hartzell said the calves are only the first step in ensuring good health in the herd. Besides the calves, the farm also has 35 yearling heifers.
He said one more way he is looking to increase profits, is to gain longevity in the herd and more lactations out of each cow. He said he works to ensure the cattle have good hooves, which helps in the overall health.
“I think that’s where the profit is,” said Hartzell.

Hartzell is in charge of the forage for the dairy herd, and he said it’s always a challenge to find the right balance for the cows and the farm’s bottom line. The farm currently uses a ration of alfalfa, red clover, sorghum/sudan and small grains to feed the herd.

Hartzell said feed costs amount to one-third of the farm’s income, which means a farm has to find a way to cut that cost if possible. Armed with his dairy science degree from Penn State, he is acting as his own herd nutritionist, and so far has been able to cut $1/cow a day by purchasing bulk soybean meal and cutting out the molasses they were using.

“This business is about the profit margins. We can’t cut corners. We have to do the best with what you already have,” said Hartzell.
He said if he begins to struggle or has a question, he just picks up the phone and calls Penn State Extension for assistance.

Another project on the barn is walls for a bunker silo, something he saw while touring some New York farms in college. He learned some of these farms were able to store silage for 15 months, so when he graduated from college, he set out to build a bigger bunk silo system, which was 20 feet by 80 feet.
The bunker silo is now 60 feet by 140 feet and will allow the farm to have enough silage stored so even if grain prices go up and down or the weather plays havoc, the farm will have a constant supply, which helps with the bottom line.
He said the bunk silo allows the farm room to grow and is not undersized.

“You can’t build for today, but for the future,” said Hartzell.

Hartzell said one of the hardest parts of farming is finding satisfaction in all facets — even hauling manure. He added some people think they can be a farmer and not deal with the public, but that’s not the case.

“People can’t be a hermit, you have to work with different people,” he said.

Hartzell isn’t shy about his family’s dedication to the dairy industry.
“Farming takes a lot of teamwork and long hours to get the jobs done,” said Hartzell.
Hartzell does have an older sister, Janelle Hoffman, who is a veterinarian with the Centre Herd Health practice and her husband, James Hoffman, is a nutritionist.
And a younger sister, Michelle, a senior at Penn State, wants to be a pediatrician.

Hartzell said he wouldn’t be where he is without his family. He said it’s handy to be able to call your sister about cow problems or your brother-in-law if you have a feed question.
“It takes us all to make it work,” said Hartzell.