MEDINA, Ohio — You don’t always have to live on a farm to take animals to the fair. In fact, you can even live in the city, if you have a good farm family to help you out.
That has been the case for Allie Loftis, 13, who lives in Medina and attends A.I. Root Middle School.

Her projects consist of pigs, turkeys and chickens, and a heifer named Sherry the Shorthorn, who won overall champion at this year’s Ohio Beef Expo.

It all started about three years ago, when Loftis fell in love with the swine at the Medina County Fair, and decided she wanted her own.

She and her parents, Leonard and Melissa, knew of the Boyert family, which lived about 10 minutes away, where they farm and run a greenhouse.

Allie asked farm owner, Mike Boyert, several times about keeping a hog at his place, and each time she was turned down. Boyert said he was worried that it wouldn’t work out, and that it would become another chore for his sons, Jake and Clayton.

But with some coaxing, he eventually decided to give Allie a try — and he’s glad he did.

“This young girl is in that barn (working),” he said. “She’s very energetic — she’s very poised.”

Allie works with her animals every day during the summer, and in the evenings during the school year. And, she also helps with farm work, and the Boyert family greenhouse business.
A summer day, she said, starts at about 8 a.m. and usually doesn’t end until around 10 p.m. 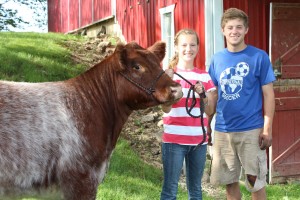 That includes time spent rinsing and walking the animals, mulching flower beds, painting, cleaning up — and whatever else needs done.

“I never would have expected myself to be where I am now,” she said. “We didn’t even have a dog (at home). We had two cats, but we got rid of them.”

Allie has two older sisters, but neither is much into fair animals.

“I guess you could say ‘girlie girls,’” Allie said of her sisters. She said they respect her passion, but it wasn’t for them.

In a typical year, Allie will show at least two pigs at the county fair, turkeys and chickens, two barrows at the state fair, plus her heifer. This year’s ban on live poultry shows will limit her to the pigs and heifer.

She works alongside the Boyerts, especially brothers Jake and Clayton.

“They consider me their little sister, I’m over here so much,” she said.

Clayton Boyert said she has a good work ethic and personality, always “smiling and laughing.”

“I probably have never seen a young person who has come from the city and picked up as fast as she has,” he said. “The way that she has taken a role is pretty incredible.”

The 4-H program helped teach Clayton and his siblings responsibility, and is now doing the same for Allie.

She has her own checking account, and understands that what she earns has to be saved for the next year’s projects.

“You really learn that what you make, you really can’t spend,” she said. “You have to save.”
Something she has to remind herself of when around her peers.

Allie is a member of the Cattle Rustlers 4-H club. Now that she’s shown animals a couple years, she is seeing her skills improve, and so is her performance. She’d like to add a lamb project, but she still has some more convincing to do before that happens.

Although the 13-year-old has a long way to go, she’s already thinking about an ag-related career.

“I don’t ever want to get out of this business — agriculture — I really enjoy it,” she said.

Her advice for other young people who may also live in town, or in places where livestock cannot be kept? Contact local farm families, and keep looking for an opportunity.

“Just never stop trying, because if I would have stopped, I wouldn’t have been able to do this,” she said. “You’ve just got to be able to keep on going.”