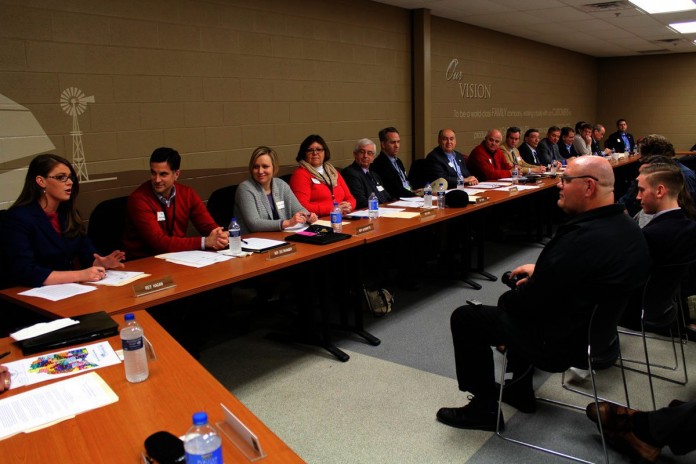 Meeting at Cooper Farms in Van Wert, the committee listened to farmers and farm organizations talk about the benefits and consequences of new rules and bans that could affect how farmers are allowed to apply manure and other fertilizers.

Rep. Jim Buchy, R-Greenville, said the bill has not yet been written, because lawmakers wanted to hear from the public first.

However, there are some strong hints at what could be included, based off recent legislation.

The House approved a bill in 2014 that would have banned most manure application to frozen or snow-covered ground in the western Lake Erie watershed, with the support of most major farm organizations, but the bill also included many non-ag provisions and the Senate did not act.

The water quality issue drew national attention in the second half of 2014, following a two-day ban on drinking water in Toledo, as a result of toxin produced by harmful algae on Lake Erie, that are fed in part from ag nutrient runoff.

Rep. Brian Hill, R-Zanesville, the new ag committee chairman, said the committee “wants to move cautiously” on the new bill, noting “it’s (the bill) going to move when it needs to move.”

Lawmakers noted the seriousness of the issue, but also the importance of doing something viable for both farmers and non-farmers.

“We know we have a very, very serious situation,” Buchy said. “It’s imperative that all of us work together in agriculture, in the cities and the north coast of Lake Erie so that we have the fine line established, where we have growth in tourism and economic activity at the lake, and we have the growth of agriculture. …”

And that was the main goal of those who testified — to develop something that allows for food production, while also promoting water quality.

“This is prime farm ground,” said Adam Sharp, vice president of public policy with Ohio Farm Bureau. “So as we discuss this issue we should consider water quality and food production simultaneously. Clean water cannot come at the expense of food production, nor can farming trump the need for clean water.”

Terry McClure, who farms 4,000 acres with his family in Paulding County and served on the state’s Phosphorus Taskforce, said there are things farmers and scientists “know” will impact water quality, things they “think” will have an impact, and thing’s they don’t yet know.

One of his goals is to overcome the unknowns, which are impacting not only his own farm, but also everyone else. He’s doing this by allowing university and USDA-based researchers to conduct edge-of-field monitoring from his own fields, to determine which nutrients and how many are escaping.

“Not knowing is not a good answer,” he said. “We can’t come up with good solutions unless we know those answers.”

Answering some of the unknowns will help ensure any new rules are science-based, and effective.

Rep. Terry Boose, R-Norwalk, said his main concern is “sound science.” He wants answers to things like what percentage of phosphorus is coming from agriculture fertilizer, manure, rural and urban septics and dredging.

Committee members noted they intend to bring scientists to some of their upcoming meetings, to provide answers to these kinds of questions.

Darke County grain and livestock farmer Jeff Wuebker cautioned the committee not to get ahead of itself. He said he was a firm supporter of S.B. 150, which required farmers to complete educational requirements and become state certified to apply fertilizer.

But he cautioned lawmakers not to legislate ahead of the research.

“We are not yet into one full year of a three-year implementation period (for S.B. 150) and we now want to change the rules, not only for the western Lake Erie basin, but for the entire state,” he said.

His main concern was with the Natural Resources Nutrient Management Standard, known as Code 590, which says farmers should not apply nutrients within a 24-hour period if there’s more than a 50 percent chance of at least a half-inch of rain.

He said he already complies with the code, but he’s concerned if Ohio makes it a law, and extends it to cover all fertilizers — not just manure — that farmers and custom nutrient applicators will be out of compliance.

Plus, he said a half-inch of rain is often a good thing for broadcast fertilizers, because it helps incorporate them into the soil.

Farmers also noted concerns over costs they may incur to comply with new nutrient regulations — especially if they’re required to store manure during the winter.

Some are already positioned for long-term storage, but for others, like Licking County dairyman Bret Layman, handling manure means applying it to fields on a daily basis.

He doesn’t have long-term manure storage. He is looking to build a storage unit, but he wants to make sure the time is right and that what he builds will suit his needs for the next several years.

“We will put manure storage in, but we want to make sure it’s at the right time,” he said.

The cost of the unit he’s considering is about $1,000 per cow, which farmers at the hearing said is the common cost.

This could impact farmers differently across the state, especially those who are not ready to invest in long-term storage.

Frank Phelps, president of Ohio Cattlemen’s Association, asked the committee to focus its efforts on the western Lake Erie basin, as opposed to the entire state. He also reminded them that not all manure is the same, and said it should be treated differently based on whether it is liquid, or mixed with bedding and other amendments.

Hill said as the committee moves forward, “the focus is definitely going to be on northwest Ohio. How far that expands, I don’t know yet.”

The next hearing is being planned for Sylvania (west of Toledo) where the committee will listen to urban and municipal concerns.