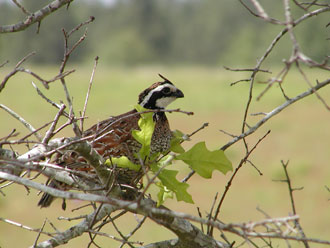 COLUMBUS — Researchers at Ohio State University are working to help the birds come back. Wildlife ecologist Bob Gates and graduate students Adam Janke, Mauri Liberati and Mark Wiley are studying the northern bobwhite — a disappearing native quail — with an eye on improving its habitat, especially in winter.

“Northern bobwhites are important game birds in the eastern U.S., but they’ve become recreationally extinct” — so few they aren’t hunted anymore — “in many parts of their historic range, especially the upper Midwest,” said Gates, an associate professor in Ohio State’s School of Environment and Natural Resources.

“But there is still great interest in conserving bobwhite populations from rural landowners and the general public,” he said.

As part of a broad project to help Ohio’s bobwhites, the researchers have dug deeply into where the birds spend winter, its favored plant types and into their movements and breeding in spring.

The goal is developing new recommendations for managing land for bobwhites — practices that improve the birds’ survival and nesting success, especially on agricultural lands.

Bobwhite numbers have crashed in Ohio, falling by three-quarters in just 21 years, 1984 to 2004, according to previous research by Gates and a colleague.

In 2007, the National Audubon Society ranked the bobwhite No. 1 among top 10 common North America birds in decline, although in Ohio, 16 counties in the southern part of the state can still support a limited hunting season.

Culprits in the drop include intensified “fence-to-fence” farming practices and urban sprawl, which damage and destroy bobwhite habitat — fence rows and pastures, for example — plus unusually cold, snowy winters, which kill up to nine out of 10 of the birds.

Bobwhites are year-round residents in Ohio, where they live at the northern edge of their range. Brown, white and chicken-like, with telltale stripes on their head, they’re well known and named for the “bob-white!” call of the male.

The bobwhite “is a sensitive indicator of ecosystem health in open lands,” Gates said, “and is just one species in a guild of edge-dependent federal trust species that depend on early successional habitats that are disappearing from much of the eastern U.S.”

Wiley grew up on his family’s farm in Union County in central Ohio and has never seen a bobwhite on the farm.

For his thesis, he studied the fine-scale features of good winter bobwhite habitat. He zeroed in on small areas, or microhabitats, each about 15 yards across.

The study sites — four total and used by Janke and Liberati for their work too — are in Brown and Highland counties in southwestern Ohio. Each site comprises 10 to 20 farms and properties owned by cooperating landowners.

Information. Bobwhite nest “(Janke’s) research has provided valuable information about landscape-level requirements of bobwhites in Ohio,” Wiley said. “My own research will hopefully build on that and identify for landowners and wildlife managers exactly what they can do on their property to improve the bobwhite habitat.”

“One of the biggest challenges of bobwhite conservation is that good bobwhite habitat often looks messy and neglected, which isn’t popular with farmers or landowners.”
Changing that perception, he said, is key to the bird’s future.
“Productive agriculture and bobwhites can co-exist if we can manage the unproductive or odd areas of our farms and properties to maximize their quality as quail habitat.”
Learn more about improving wildlife habitat on farmland, including for bobwhites, in a fact sheet by Ohio State University Extension at http://go.osu.edu/G3U. OSU Extension also has a fact sheet on planting shelter belts for wildlife, which are especially helpful in winter, at http://go.osu.edu/G3S.
Read more about Ohio State’s Terrestrial Wildlife Ecology Lab at http://twel.osu.edu/.