MEADVILLE, Pa. — Jessica Peters knows her dairy cows about as well as most people know their dog or cat.
As she walks down the center of her dairy barn — calling out their names and petting them on the head — it’s clear the cows know her, just as well.

She’s named them things like Patsy, Fluffy and Blueberri, based on their appearance and personality. And she spends time with each one at least twice a day, at milking.

Jessica, along with her brother, Cole, and their parents, Jeff and Janet, milk a little more than 200 registered Jersey cows at their family’s Crawford County dairy farm. It’s not a large number by today’s standards, but for the Peters, it’s a manageable number.

“I think that’s been a big part of our success,” said Jessica, 29. “I know every cow’s name, how much they should be giving, if they’ve had mastitis in the last year (and) what kind of calving they’ve had.” 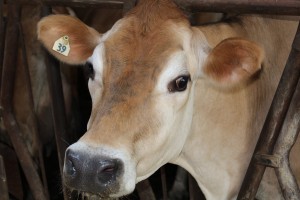 Last year, she and Cole submitted a video of themselves and one of their cows, sticking out their tongues, to America’s Funniest Home Videos. Jersey cows are known for being very oral, Jessica said, and that was definitely the case with the cow in the video, which kept licking and licking.

The Peters did not win, but their video aired on television in November, and brought the farm some lighthearted recognition.
The farm gets quite a bit of attention just because of its location — along a busy stretch of U.S. 322. That can be a good thing, and also a challenge, Jessica said.

On the challenging side, she and her family have to be cautious when taking equipment or animals across the road, and they have to remember that the public is always watching — literally driving — down the middle of their farm.

On the positive side, “people find us easily and we’re pretty public,” Jessica said. “We have to remember the public is always there.”

The farm actually does quite a bit with the public, such as conducting tours for college students, and hosting Jersey breed events. And, the farm promotes itself and the dairy industry through an active Facebook page, called Spruce Row Farm.

Jessica tries to keep the page personal, with pictures and real-life updates about the farm. She describes herself as a social person, who likes to have fun. But when she’s working with the cows, their care comes first.

“With my friends, I like to have fun,” Jessica said. “But I’m not fun to work with.”

That’s because when she’s milking or working with the cows, she knows what needs done and exactly how it should be done.

She and Cole make the fifth generation to farm there, and the family has carried the Jersey breed all along.

The farm incorporated at the beginning of this year, under the name Spruce Row Inc., to allow Jess and Cole to become part owners, and to form a more practical business model for the future.

Sometimes, working with family can be a challenge — but it’s one that Jess enjoys.

“I can be screaming at my brother in the parlor 10 minutes before lunch, but we come in for lunch and it’s fine,” she said. “It’s not personal — it’s business.”

When college students visit the farm, she doesn’t sugarcoat the work and hours that a dairy farmer puts in.

But Jessica certainly has her soft side, something she shares with her brother most days.

She and Cole sometimes call themselves “functioning idiots,” she said, a lighthearted term they use to explain the ideas and ambitions they each come up with.

Recently, they thought of an idea of putting an automated chair system in the parlor, so they wouldn’t have to walk up and down the aisle so much. It’s doubtful one will be built, but it’s the kind of creativity they engage in.

On a more practical side, the Peters family is looking to update its buildings and milking parlor — something Jessica said would increase cow productivity and cut down on the amount of time it takes to milk.

Although the herd is producing well, and has been among the top-producing Jersey herds in the nation, she expects the cows would do even better with a new setup.

“We know our cows could be doing better,” she said. “My facilities are definitely holding me back.”

Her father, Jeff, recently renovated an old tie-stall barn on the farm, with 44 new head gates, which they use as their calf barn. That improvement alone has added to the farm’s efficiency, and helps get the young calves used to eating out of a head gate system.

Whatever new buildings might come, they’ll most likely be filled with Jerseys. Jessica is executive secretary of the Pennsylvania Jersey Cattle Association, and she likes the efficiency, production and handling of the breed.

For many years, her parents bottled the milk and sold it on the farm, but inspection costs and the commitments between farming and running a retail store got to be too much.

That venture ended in 1985, but Jessica said she still holds a passion for retail, if she could just figure out how to balance the two commitments.

Right now, she’s happy with the 200-plus they milk, and the opportunity to continue her family’s farm.

“I love that you get to do something different every day,” she said. “I know farming is intense, but you also, in a way, get to make your own schedule.”

Like last June, for instance, when her first nephew was born during planting season, in Florida. Somehow, the family managed to go visit for a couple days, and still get things done on the farm.

This year, they tied for the top genetic Jersey herd in the state and, thanks to selective matings, their herd continues to improve.

Jess said today’s dairy farms have a lot of opportunity if they’re open to new technology and new ways of doing things. But at the same time, they need to be bold enough to say no to things that don’t work.

“I’m not saying you have to use every technology that comes into your path, you just have to be open to it, and decide whether it’s something you want to try or not,” she said.

One of the biggest things Jess tried — and did not stick with — was working on some dairy farms in New Zealand. She moved there after college, and while the experience was rewarding, she’s glad to be back home working on the family farm.

“Every day I have lunch with my family,” she said. “How many people get to say that?”