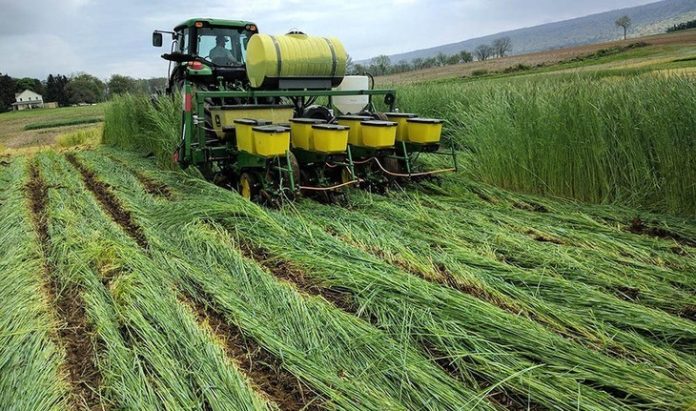 UNIVERSITY PARK, Pa. — Allowing cover crops to grow two weeks longer in the spring and planting corn and soybean crops into them before termination is a strategy that may help no-till farmers deal with wet springs, according to Penn State researchers.

The approach — known as planting green — could help no-till farmers counter a range of problems they must deal with during wet springs like the ones that have occurred this year and last year. These problems include soil erosion, nutrient losses, soils holding too much moisture and causing a delay in the planting of main crops, and main-crop damage from slugs.

“With climate change bringing the Northeast more extreme precipitation events and an increase in total precipitation, no-till farmers especially need a way of dealing with wet springs,” said Heather Karsten, associate professor of crop production ecology. “We wanted to see if farmers could get more out of their cover crops by letting them grow longer in the spring.”

As cover crops continue to grow, they draw moisture from the soil, creating desired drier conditions in wet springs for planting corn and soybeans. With planting green, after those main crops are planted into the cover crops, the cover crops are typically terminated by farmers with an herbicide.

The decomposing cover crop residues then preserve soil moisture for the corn and soybean crops through the growing season.

At each location, researchers compared the results of planting green to the traditional practice of terminating cover crops 10 days to two weeks before planting the main crops of corn and soybeans. Cover crops included in the study were primarily rye and triticale, as well as a mixture of triticale, Austrian winter pea, hairy vetch and radish in one location.

Findings of the research, recently published online in Agronomy Journal, were mixed, according to study leader Heidi Reed, a doctoral student in agronomy when the research was conducted who is now an educator with Penn State Extension, specializing in field and forage crops.

Because planting green results in more cover crop residues acting as mulch on the surface, it also cooled soils from 1.3 to 4.3 degrees Fahrenheit at planting.

At several of the sites during the study years, main-crop plant populations were reduced when planted green, possibly due to the cooler temperatures slowing crop emergence and nutrient cycling, and/or from cover crop residue interference with the planter. In corn, in a few cases, crop damage by slugs was also increased when corn was planted green. 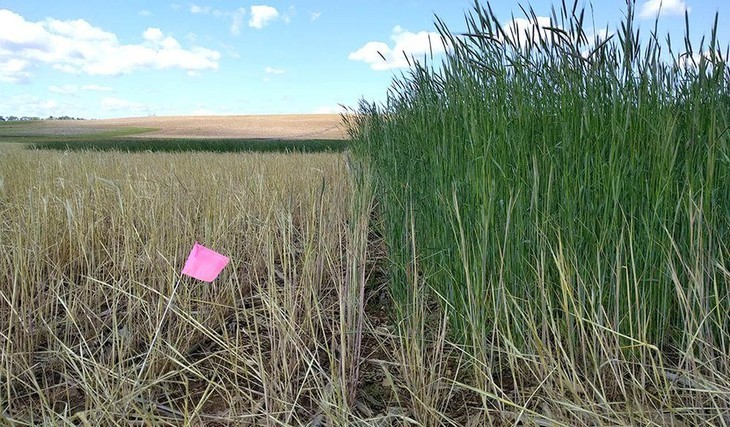 No-till farmers struggle with slugs damaging corn and soybean seeds and seedlings because no-till doesn’t disturb the soil and kill slugs or bury their eggs the way tillage does.

“We had hoped that letting cover crops grow longer in the spring would supply alternative forage for the slugs, as well as habitat for slug predators such as beetles — and these factors would reduce slug damage of the main crop seedlings. But we did not see a consistent reduction in slug damage on main crops as we expected,” Karsten said.

“We concluded that corn was more vulnerable to yield losses from conditions created by planting green than soybeans, ” Reed said. “We suggest that growers who want to extend cover crop benefits and avoid the risk of crop-yield reduction from planting green should consider trying it first with soybean.”