(Note: As part of our 100-year anniversary celebration, we continue our 10-week series profiling some of the region’s farms that have been in the same family for 200 or more years)

HOPEDALE, Ohio — When Ezekial Cole purchased 140 acres of land in an area that would eventually become Wayne Township in Jefferson County, Ohio, it is unlikely he considered how, or if, the family farm would be operating 206 years later.

Standing between rows of corn and soybeans on the farm’s current 420 acres, Cole’s great-great-great-great grandson, Carl Kithcart, paused to consider that very thing.

“It just makes you feel good, makes you proud, to keep the farm going,” Kithcart said, looking out across the rows, then down at the ground beneath him. “It’s kind of hard to explain.”

Farm operations were taken over in 1811 by Ezekial Cole Jr. His daughter, Mary Ann, married Cunningham Kithcart and the farm became known as the Cole-Kithcart, and then simply Kithcart Farm.

Carl and his brother, Lee, operate the farm, and marvel that their ancestor paid $420.03 for the property in 1808.

“That won’t buy a half acre now,” Lee laughed.

The family has maintained many historical records, including farm ledgers dating to 1880, when five bushels of wheat sold for $4.35, 98 pounds of beef for $4.90, and six bushels of potatoes for $2.50.

Kithcart Farm grew over the next century, beginning with a farm house built in a hollow near a natural spring. 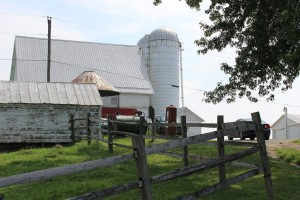 The current, towering Kithcart farm house was built in 1898 by the brothers’ great-great grandfather.

“His wife said she’d like to see a house on a hill and that is all it took,” Lee said.

When it was built, the farm house featured a 50-foot high cupola which, combined with the farm’s 1,200-foot elevation, gave a view to Steubenville, 20 miles away.

The original milk house, dragged from the hollow to the hill when the new house was built, is still standing. And while a tornado in the 1930s took down portions of the original barn, the log beam hay mow inside, built by Ezekial Cole Sr., remains.

The family has been contour farming and strip cropping, following a crop rotation between corn and hay, in the hilly area of southeastern Ohio since 1936. Today, the brothers’ two-man operation works 300 acres, with the remaining 120 acres rented out. They have 105 acres of corn, 65 acres of soybeans, 70 acres of hay and about 20 acres of wheat and oats.

The Kithcarts also finish roughly 80 head of steer each year. 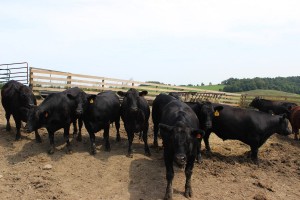 The family ended its dairy operation in 1995, selling off its 60 head herd of Holsteins.

“We just couldn’t keep up,” Carl said. “We are in a dry area here and it’s hard to keep a lot of water. I was hauling 220 gallons from Smithfield. It’s not hard work, but time consuming.”

The ability to make such tough decisions has also been vital to growing the farm in other areas. Three years ago, the Kithcarts delved into some no-till farming, albeit with mixed results.

The change has been positive in a number of ways, from requiring less time and manpower, to improving the limestone-based soil in the area. The Kithcarts also recently upgraded a corn planter and purchased a combine.

“A lot of people would say we are behind the times,” Carl said of gradual move to no-till farming, noting that while yields have fluctuated from year to year, they are experiencing a particularly good crop this season.

Family patriarch Glenn Kithcart died in September 2013, in the heart of fair season and just two weeks shy of his 94th birthday. His wife, Carol, had passed 10 years earlier. Had he had it his way, Carl said affectionately of his father, Glenn Kithcart would have worked until his last day on earth.

“When he fell off the back of a Gator and had to go to physical therapy in Hopedale, he kept trying to leave,” Carl said. “He said he had to get back to the farm — he was still mowing grass in his 80s.

“The nurses told him, ‘Mr. Kithcart, we’re going to have to call the sheriff to block the door’ and he told them, ‘That’s all right. I know him, he will give me a ride home.’”

That spirit has certainly passed down to Glenn’s sons.

After high school, Carl pursued a career as a welder, but in time moved back to the family farm. Lee said farming is all he has ever done.

“I don’t know anything else,” he laughed. “It’s in our blood I guess.”

Now both in their 60s, Lee and Carl remain equal parts progressive and traditional.

“We just keep adding and adding — people say we’re going to run out of hilltop,” Carl laughed as he walked between the array of barns, outbuildings, grain bins and equipment sheds on the property that straddles a stretch of state Route 151, five miles between Hopedale and Smithfield.

Pointing out the leg attached to one of the grain bins, Carl said, “That is for the wind. It gets really windy up here.”

“You’ve got to work with the weather,” Lee said. “You used to get high pressure systems for four or five days straight, now we get two or three good days in a row if we’re lucky.”

“Weather is key, and the weather is changing,” Carl added.

The brothers have worked well as a team for more than six decades, something even family members find surprising.

“We have a cousin who tells us, ‘boy, I couldn’t work with my brother’,” Carl laughed.

They are hopeful operations will remain in the family.

“I pretty much plan of fully taking over as soon as I can,” said Cole Harmon, Carl and Lee’s great-nephew, who will be a senior in high school this year. He plans on going to college for IT, “but that would be a side job.”

Cole has worked with his uncles on the farm for most of his life.

“I remember him being a couple years old and falling asleep when he was on the hay baler with me,” Carl said. “The sound, I guess, put him to sleep.”

Gazing again over the season’s crops, the normally gregarious farmer said quietly, “My dad and granddad plowed this whole hillside with horses, and Dad would be amazed at how good we’re doing with the no till. But I’m 62 and Lee is 69, and a lot of times at the end of the day, we do wonder why we still do it.”

Then, pointing to a pair of initials carved into one of the timbers of the 200-year-old hay mow, he answered his own question.

“My granddad and his helper did that,” he said. “Those are his initials.” 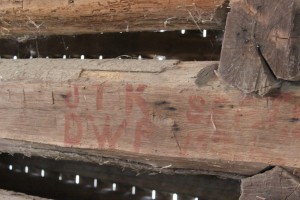