GROVE CITY, Pa. — Judy Ligo climbed over the high tensile fence and into the pasture to check on a cow and calf pair. They were doing fine. It was as routine as brushing her teeth. Judy, 52, dug out her cell phone and started snapping a few pictures of one of her Highland cows that was for sale.

Then, that one day, she heard a bone-chilling noise.

Bandit, the Highland bull she had raised since birth, was starting to snort and she heard his feet pawing at the ground. Her instincts kicked in immediately. She knew she had to get out of the way.

Judy turned and saw Bandit barrelling at her, and she knew she was in trouble. She started running as fast as she could. She had to try and get out of the way.  She knew it was going to hurt.

Affectionately known as the “cow whisperer” in the cattle world, Judy is no stranger to working with cattle, and is known for her fitting and showing career.

She and her husband John started a dairy operation in Mercer County but transitioned to beef after 20 years in the business. They breed Angus and Angus cross cattle and operate as a commercial cow-calf pair and finishing operation, and sell retail beef to consumers, grocery stores and farmers markets.

The couple have 400 head of cattle, of which 40 are Highlands. 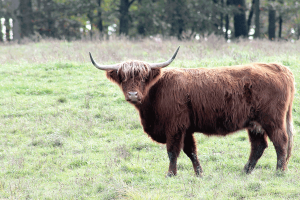 Judy does most of the breeding decisions on the farm, and she likes to see the calves hit the ground, the result of her decisions.

Bandit, who was several years old, was the bull used in her Highland cattle herd. Judy had raised him from a few days old and had bottle fed him. She was comfortable, but always cautious, when she would get near him because sometimes he liked to play. But she never thought he would hurt her.

Dinner was over and it had just stopped raining. It was a rare break in the rainstorms that pounded western Pennsylvania and eastern Ohio in June, so John went to check cattle at one of their other farms. Judy decided to slip out to the pasture to check on a cow that had just given birth, and to take pictures of one of their Highland cows for a prospective buyer from Washington state who had called earlier in the day.

She was running toward the fence full speed, but before Judy could get out of the pasture, Bandit picked her up with his head and horns and started throwing her around like a rag doll.

Her cell phone flew from her hand and when it hit the ground, the camera’s video recorder turned on, recording mostly sky, but capturing the attack’s horrific audio.

In the recording, she screams out for him to stop, to no avail. He won’t stop — just continues throwing her around with his horns.

Some say guardian angels come in all sizes and shapes, but that one day, Judy Ligo’s took the shape of a 12-year-old Highland cow, Antonia.

As Bandit pummeled Judy, she is not sure if she blacked out or not, but she remembers laying on the ground and hearing Bandit charging back at her. She looked up, and saw two cows. One of them was Antonia.

Antonia bellowed and got in front of the bull before he could gore Judy.

It was enough to give Judy a break to scramble to her feet and try to get out of the pasture.

At the neighbor’s across the street, a young boy visiting from western Ohio happened to be playing outside.

He heard her screams, ran inside and told the adults a bull had just attacked a lady.

The neighbor man reached Judy as she neared the fences. By now, her pain had started and she was grabbing her shoulder and her chest. In the background, Bandit continued to snort and bellow as he stomped at the ground. With the neighbor’s help, Judy navigated the set of fences, climbing over and under the high tensile fence and across another open pasture to get to her driveway. She was just happy to have survived.

As Judy sat along the edge of the driveway, it started raining again. Lightning struck across the street and she could feel the electricity in the air, punctuating the nightmare.

The neighbor called John and calmly explained that Judy had been attacked by the bull, but she had gotten away and crawled out of the pasture on her own.

John thought it couldn’t be that bad if she was able to stand up and get out of the pasture on her own. In his mind, she has been in the pasture thousands of times before and nothing had happened, so this couldn’t be that severe. But he quickly finished his chores and headed home.

In hindsight, he and Judy agree, they should have called an ambulance.

John stopped along their long driveway and picked up Judy in the pickup truck.

When she turned her head, he thought something was wrong, but then just figured it was a matter of bruises and swelling. He got her in the house, propped her up with pillows and gave her some Ibuprofen. They both thought the pain would subside and she would be fine.

“There was no way to see the extent of the injuries,” said John.

An hour later, Judy asked to go the emergency room in nearby Grove City, Pennsylvania.

A few hours later, an X-ray revealed injuries both Judy and John never expected: a broken neck and broken ribs.

The tests showed fractures in both the sixth and seventh vertebrate in her neck, and broken ribs, but the severity of each injury was unknown.

Before she knew it, she was placed on a backboard with a brace and was being transported by ambulance to Allegheny General Hospital in Pittsburgh, to see a neurosurgeon.

“I asked them, why couldn’t we just drive there? It just seemed liked a waste to have an ambulance take me there,” said Judy, still not realizing the extent of her injuries.

The ribs would heal by themselves with time, but the doctors determined the injuries to her neck would not. After being in the hospital for three days, doctors decided surgery was needed.

Besides her neck and rib injuries, the MRI revealed one more injury: One of the main arteries in her neck was crushed during the attack. Instead of having two arteries servicing her brain, she would live the rest of her life with one, which could mean compromised blood flow as she ages.

She was able to leave the hospital after only one week, but Judy had to wear a full neck and torso brace for eight weeks, followed by six weeks of physical therapy.

And through it all, the farm had to keep going. So Judy had to give directions to her husband on what had to be done and when, frustrated,  because she was so used to handling her own share of the work, now she had to hand it off and hope everything got done.

Her first big outing after the ordeal was to the Mercer County 4-H Roundup for the livestock sale, and was astounded by the support she received from family, friends and the agricultural community.

“You live by degrees,” said John when he thinks back to that June day.

Nothing was different that one day except for the tiniest things.

“When you think about the possibility of what could have happened, you realize how lucky she was,” said John. “Judy survived that attack by the tiniest degree.”

As Judy thinks back to that one day, she wonders if there were warning signs or something she could have done differently.

She remembers how Bandit would always throw his hay around with his horns and wonders if that was a precursor to what would come.

She goes back to the days when Bandit was a calf and wonders if bottle feeding him had anything to do with the attack. Perhaps the idea of learning respect and what is his space and what was her space was lost somewhere along the way.

She has also wondered if the injections he endured as a sickly calf made him associate pain with her.

She still hears the bone-chilling bellowing Bandit made as he charged.

“He was all about attacking and killing that day,” said Judy. “I could have been completely paralyzed or dead.”

It’s a lesson she painfully relearned that one day.

*** Behind the story: Judy Ligo was featured in our Women of Ag Series in February. The Farm and Dairy staff had decided to put a picture of her and Bandit on the front page of that issue. Here is Bandit just this past winter.**** 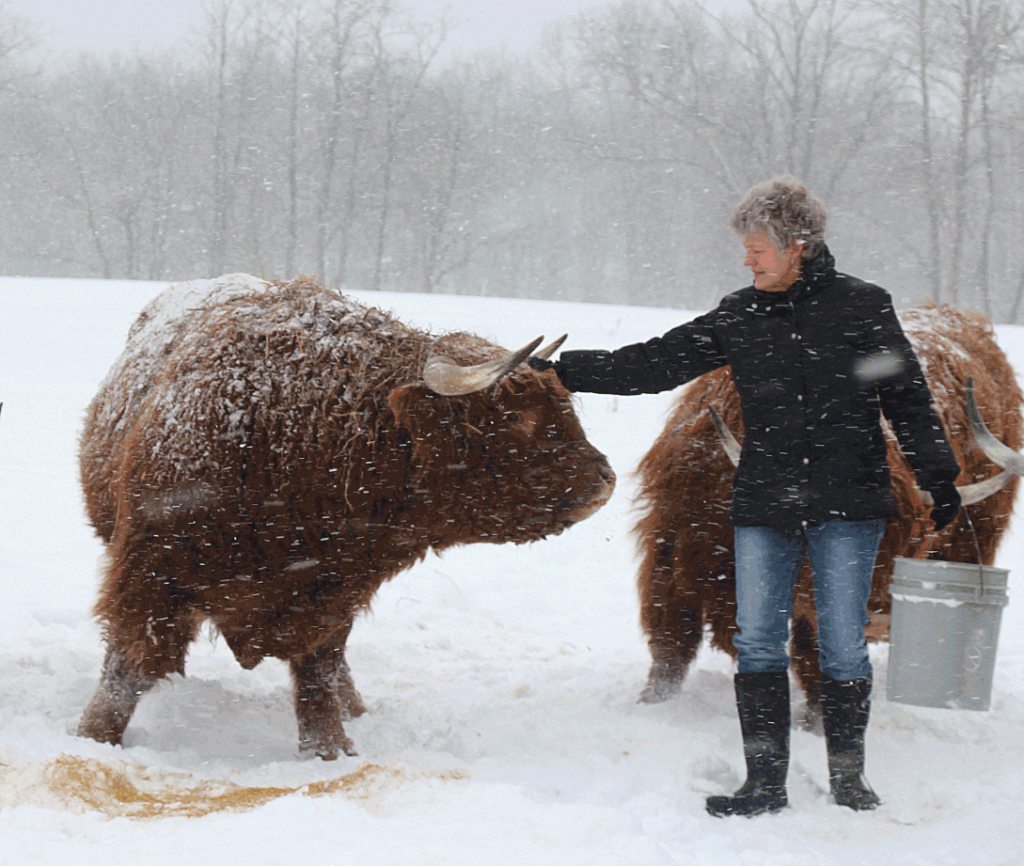