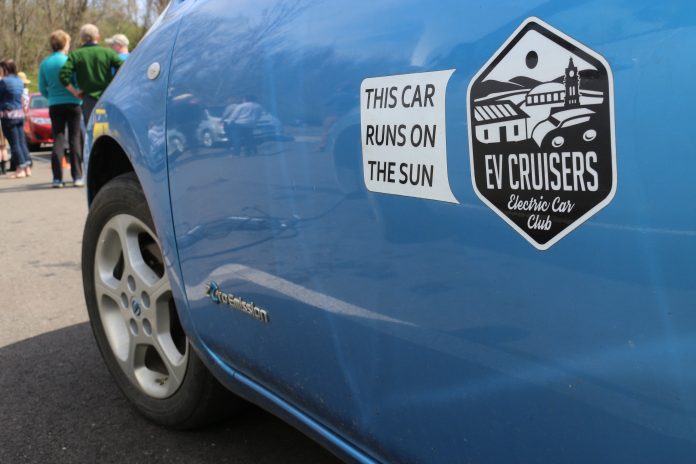 She and others from a group of electric vehicle enthusiasts in her area took an informational field trip to the closest dealership that carried them. It was in Columbus, about 70 miles or so away from her home in Athens County, Ohio.

After the visit, they each kept an eye on the inventory of Leafs as they arrived. When it came to be Conley-Ballew’s turn to buy, she knew it wasn’t going to be easy.

“In order to get this Nissan Leaf back to Athens County, for each of us, it was like an odyssey,” she said. “The upper limit on the Leaf I got is 70 miles. I basically ended up 20 minutes from home and had to call a tow truck.”

The Nissan Leaf is one of the most affordable electric vehicles on the market. The base model costs around $30,000. The range for them now is double what it was when Conley-Ballew was in the market several years ago.

But the process to get an electric vehicle home to rural Athens County was not an easy one, even for a highly motivated person like Conley-Ballew. She’s the director for the sustainable energy program with Rural Action, a nonprofit based in southeast Ohio focused on building Appalachian Ohio’s economy in environmentally, socially and economically sustainable ways.

This is what the energy transition looks like in rural areas. It’s not easy for those who already buy into all the benefits renewables, electric vehicles and energy efficiency have to offer. For those who are less willing, or less able, it could be impossible, at least without help.

Rural electrification efforts began in the 1930s. At that time, it was simply about getting electricity to rural areas. Now, as the Biden administration throws its weight behind renewable energy and electrification as a way to cut greenhouse gas emissions and create jobs in the U.S., it means something different.

The next month, the U.S. Department of Energy released the Solar Futures Study, showing it was possible for the U.S. to get 40% of its electricity from solar by 2035 and 45% by 2040. Though this would require installing solar at four times the current deployment rate, it could also employ between 500,000 to 1.5 million people, according to the DOE.

The goal would be reached through a combination of utility-scale installation and distributed solar. The study even found that distributed solar, like rooftop installations, could “increase the value of electric vehicle adoption to consumers through a combination of low-marginal-cost electricity and managed charging — and thus could accelerate electrification of the transportation sector.”

This news was exciting for environmental groups, renewable energy developers and others. The one-two punch of electric vehicles and solar deployment could make a huge difference in reducing greenhouse gas emissions. The transportation sector is the top producer of greenhouse gas emissions in the U.S., at 29%, followed closely by the electricity sector at 25%, according to the U.S. Environmental Protection Agency.

The reality of electrifying everything is more complicated, especially when considering the state of the nation’s grid.

This past summer, heat waves across the country had some utility companies asking customers to cut back on electricity use so as not to overtax the already stressed infrastructure. Extreme weather is the most commonly-reported cause of power interruptions, according to the DOE, and the frequency of extreme events has increased significantly over the last two decades.

All of this is not news to people living in rural areas, where people are used to being more self-reliant than those living in suburban or urban areas. Many rural residents have to supply their own heat, water and wastewater treatment systems, because there is no public system for them to tap into.

Independence and resiliency are not only part of the rural living philosophy, in many cases it’s a necessity. That’s why the movement to electrify everything can be a hard sell.

At the same time, it’s also why small-scale solar works for people in rural areas.

“If you have a photovoltaic system on your roof, a powerwall on your garage, you don’t really have to worry about what’s going on with the grid,” said Gilbert Michaud, assistant professor of environmental policy at Loyola University Chicago. Michaud previously was a faculty member at Ohio University and still does research in rural Ohio.

That played a part in why Bruce Burnworth installed panels at his home in Delaware County, Ohio. Burnworth, a row crop farmer, had a small ground-mounted system put in by Third Sun Solar, an Ohio-based solar installer in 2016.

Burnworth said he always thought it was a “cool idea to be able to generate your own power,” but it wasn’t feasible for him until recently when the costs of solar panels went down. He did it to help the climate, reduce their carbon footprint, reduce their electric bill and make themselves more resilient.

The goal isn’t to go off-grid, but to be more self-reliant. When the remains of Hurricane Ike blew through Ohio in 2008, it knocked the Burnworths’ power out for a week. With solar panels and battery storage, that wouldn’t have happened, he said.

Compare that with utility-scale solar projects, which have proven to be a divisive issue in many communities. These many-acres large projects directly benefit the large landowners who sign on to lease their land for 30 or more years, and broadly benefit the town government and school districts in the form of tax payments.

These projects, however, rarely benefit the local residents in terms of directly decarbonizing their electricity.

“A lot of these giant projects, the power is really going to places far away,” Michaud said.

When Conley-Ballew is trying to sell people on the benefits of installing residential or commercial solar, she sometimes compares it to the local food movement. If a person cares about where their food comes from or knowing their farmer, maybe they should think about those things in the context of energy.

“Do you know where your energy comes from?” she said. “How local is your power? Could it be more local?”

As part of her work, Conley-Ballew helps people and businesses apply for renewable energy grants from the USDA. The idea of local power hits with some people, mostly those who can afford it, she said.

The cost to install a rooftop residential solar system ranges from about $15,000-$25,000. There are federal tax credits available through 2023. Ohio, Pennsylvania and West Virginia allow net metering, meaning residents can sell energy back to their utility provider when their solar system produces past what is needed in their household.

Ohio and Pennsylvania residents can also get Solar Renewable Energy Certificates, which are often called credits. Homeowners are paid per megawatt-hour of electricity produced by their solar system. The price per megawatt-hour, or per credit, is determined by the private marketplace. Utilities buy these credits to meet renewable energy goals.

There are nine states and the District of Columbia that have markets for such credits. In some states, credits are sold for hundreds of dollars. In Ohio, the going rate for credits is so low — between $5 and $10 — that it’s not worth it to participate, Burnworth said.

EV distribution in Ohio is concentrated around Cleveland, Columbus and Cincinnati, with smaller concentrations around Akron, Dayton, Toledo and Youngstown, according to a report released this month by Rural Action and Clean Fuels Ohio, with funding from the DOE. Nationally, electric vehicles currently make up about 3% of the new car market. There are estimates that it will jump to about 10% by 2025.

There’s anxiety about the range and lack of public charging stations. EVs cost more up front and don’t come in the options that rural people need. There are no electric pick-up trucks or large SUVs currently on the market, although a couple of options are coming. Conley-Ballew said the market for used electric vehicles is basically non-existent. She bought a Leaf but also has a Honda Pilot as a family vehicle.

“I’m a mom with three kids. I cannot drive from my home to the city of Athens without a four-wheel-drive,” Conley-Ballew said. “Until there’s an electric Honda Pilot that’s under $40,000, it’s an unattainable thing for a person like me.”

The report cited research from the DOE and Argonne National Laboratory that found “rural households drive further and have higher transportation energy burden than suburban and urban households.”

People in rural areas drive further each day and annually than those in more densely populated areas because things are spread further apart and because there’s a lack of public transportation. Rural motorists tend to drive older, less fuel efficient vehicles and tend to live in lower income households than their suburban and urban counterparts.

Though electric vehicles cost more initially, they could save rural drivers between $1,900 and $2,800 per year in fuel and maintenance costs, the report found.

There are no easy answers for how to integrate renewable energy and electrification into the lives of rural residents. Education efforts can help, but money talks. A good start is focusing on policy actions at the state and federal level, Michaud and Conley-Ballew said.

“We need to do a better job, even at the state level where a lot of policy incentive decisions are made, at making sure that rural populations and rural communities are in the discussions,” Michaud said.

The Rural Electrification in Ohio report points to financial incentive programs as one of the key ways to increase EV adoption in rural areas. This would take the form of tax credits and rebates for consumers, but also financial support to research and develop more EV pickup trucks.

States can look to Illinois for guidance on that front. The state legislature recently passed a comprehensive climate bill that will, among other things, provide rebates for electric vehicles and invest millions in growing renewable energy generation.

Burnworth said the 30% federal tax credit available at the time in 2016 when he installed his home solar array basically made the decision for him.

“It takes a government effort,” he said. “It takes guidance.”

Other things may trickle down after that. Just like any time a new technology is adopted, as more people buy in, the cost eventually goes down. That’s what happened with solar panels. The price to install panels declined dramatically in the last decade. Technology improved and economies of scale kicked in.

Think about what happened with the iPhone, Conley-Ballew said. They weren’t commonplace in rural places or marginalized communities at first, but now they are. The same could happen with electric vehicles or residential solar.

“It really is just a piece of equipment that makes a home work better,” she said, of solar panels. “Maybe someday it will be as ubiquitous as an air conditioner.”