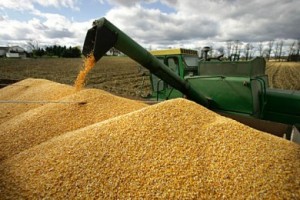 REYNOLDSBURG, Ohio — Despite enduring the worst drought conditions in more than 50 years, farmers are likely to harvest the eighth-largest corn crop on record this fall, according to The World Supply and Demand Estimates report and Crop Production reports — released Sept. 12 by the U.S. Department of Agriculture.

The reports projected an average corn yield of 122.8 bushels per acre (bpa), above analysts’ pre-report expectation of 120.5 bpa. The projected total crop size of 10.73 billion bushels (bbu.) also came in above the average expectation of 10.4 bbu. and is down less than 0.5 percent from the August estimate.

If realized, this will be the lowest average yield since 1995. Area harvested for grain is forecast at 87.4 million acres, unchanged from the August forecast but up 4 percent from 2011.

Compared with last month, yield forecasts are lower or unchanged across the Great Plains and most of the Corn Belt as lingering drought conditions continued to hamper yield expectations.

Area for harvest in the United States is forecast at 74.6 million acres, unchanged from August but up 1 percent from last year.

On the demand side, USDA increased 2012-2013 livestock feed demand to 4.15 bbu., up 75 million bu. from last month’s report. Corn use for ethanol and co-products was unchanged at 4.5 bbu. Because approximately one-third of every bushel of corn used for ethanol returns to the feed market as distillers grains, feed use will account for approximately 5.5 bbu. in 2012-2013 on a net basis, compared to net corn use for ethanol of 3.15 bbu. Thus, on a net basis, ethanol use will account for 26 percent of the total supply, while feed use accounts for 46 percent.

Projected exports were lowered slightly from last month to 1.25 bbu. Meanwhile, 2012-2013 carry-out was raised to 733 million bu., up 13 percent from last month’s projection of 650 million bushels.

The increase in 2012-2013 carry-out is explained by higher carry-in that more than offsets slightly lower production and slightly increased demand.

At 2.71 billion metric tons, USDA is also expecting the total 2012-2013 grain supply (coarse grains, wheat, and rice) to be the second-largest ever.

“This report should bring some calm and increased certainty to the markets,” said Renewable Fuels Association President Bob Dinneen. “With each passing day, we have a better sense of the size of this year’s crop. We are thankful that it appears very little additional damage was done to the corn crop in late August and early September.”