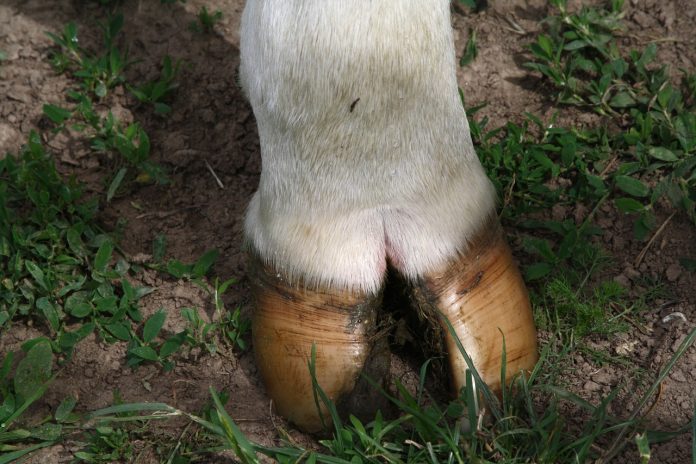 1Hard and soft feet
Foot infections, abscesses or sole ulcers may develop from cracks that result when feet are too soft or hard. Soft feet are more likely to occur in freestall systems from standing in manure and urine. This may result in heel and sole cracks allowing ulcers, abscesses or infections to occur.

Hard feet usually occur in stall barns, especially when kiln-dried shavings or sawdust are used for bedding. This could result in cracks at the top of the foot, which may extend down from the hairline and allow infections relatively high in the foot.

2Foot rot
A smelly infection of the foot, which generally occurs high between the claws or toes, is referred to as foot rot. Cattle will show lameness, usually in one leg only.

The foot swells above the coronet and toes spread. Cracks and fissures develop in the space. If left untreated, it can progress into the joint space or tendon sheath creating permanent damage.

3Heel erosions
Heel erosions begin at the bulb of the heel. They start out as pits on the surface that can develop into parallel grooves that get filled in with black material and bacteria. The horn can separate at the grooves forming a flap and a new sole develops underneath with material becoming packed in between the layers.

This condition is usually seen in confined cattle in wet, dirty lots. Overgrown hooves shift the weight toward the heels, exposing the heels to erosion, mostly in the hind claws.

4Laminitis
Founder or laminitis can result in long, overgrown and deformed feet or toes. Cows may appear lame and still and have difficulty getting up and down.

Hemorrhages can be found in the soles and walls of the feet. Infections, abscesses, or ulcers may occur when foreign material enters places where the wall and sole have separated. The highest incidence of laminitis often occurs during the first 100 days postpartum.

5Sole ulcers
Sole ulcers are raw sores occurring on the inner side of the outside claw. It is a bulge of granular-like tissue sticking through the sole. They are usually associated with clinical manifestations of laminitis — if 10 percent of the herd has documented sole ulcers, the herd should be suspected for laminitis.

Other factors can result in ulcers such as moisture and manure, excessive wear, and poor hoof trimming. Ulcers usually occur in both hind legs.

6Digital dermatitis
Animals affect with digital dermatitis have pronounced lameness and spend excessive time lying down. First-calf heifers are often affected, and to a greater degree in the hind feet. There is little to no digital swelling with this disease.