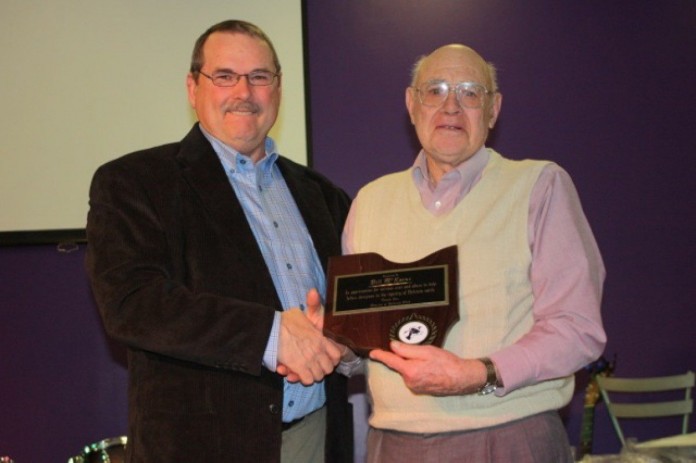 
(Scroll down to see more photos from the annual meeting.)

ALLIANCE, Ohio — It was a difficult year for members of the Ohio Holstein Association, but they made it clear at their annual meeting March 7-8 in Alliance they are ready to move on.

“This past year has been trying for the association,” said former president Tom Thorbahn, of Vickery, Ohio. “But it was something that we got through.”

The association found itself in default of $346,000 in May 2013, the result of a cattle contract that now-fired general manager, Don Alexander, reportedly entered into without the Holstein association’s consent.

In August, the association has signed a confidential agreement with New Jersey-based Nil Livestock Co., concerning debt owed to Nil for the sale of heifers in 2011.

For nearly three years, court documents were mailed to an address other than the official Ohio Holstein Association address, which is why the association’s board and members didn’t know what was going on.

The association, whose membership dipped approximately 80 people to 688 as of the beginning of March, is looking ahead, and opened the floor during its business meeting to members’ input into the type of paid administrator it now needs. The board has discussed the situation at length, but wanted to hear directly from members.

Although various comments were voiced from the floor, no consensus or formal recommendation was finalized.

The association’s Distinguished Service Award was presented to auctioneer Steve Andrews, of Wooster, Ohio, who was unable to attend. A fourth generation auctioneer, Andrews is familiar to many livestock sale-goers, and he has cried many sales for the Holstein association and members.

Whiteleather, of Minerva, currently serves on the association board, and is part of his family’s 500-head registered Holstein operation 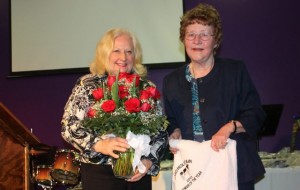 Mary Liming, of Lou-Ida Farm in Trumbull County, received the Ohio Holstein Woman of the Year award. This year marks the 97th year Lou-Ida has been raising registered Holsteins, and when Mary was young, her father, Lamar Young, gave her the job of registering the calves — a job she continues today on the farm, now operated by Mary and husband Lee Liming, as well as their son, Lamar Liming.

The Ohio Holstein Queen in 1956, Liming has spent a lifetime promoting Holsteins, encouraging farmers to register their cattle, even helping them draw the cattle pictures and complete the applications.

The Youngs, then the Limings, were fixtures in the show ring, and continue to show at the local and district shows, as well as the Ohio State Fair, and Mary is still the one to prepare the papers and plan the displays. She also does the farm’s accounting and computerized records.

In addition to the dairy farm, she has been active on community and church boards and committees, serving most of these as treasurer.

In a surprise presentation, the state association presented a special award to Columbiana County’s Bill McKarns for his lifetime love for the registered Holstein cow, and belief in the power of the state and national breed associations.

In 2007, McKarns received the Holstein Association USA’s first Distinguished Leadership Award in recognition of his passion and determination to open the national association’s registry to include grade cattle, an idea that wasn’t popular in the late 1980s and early 1990s. Today, he is recognized as the “Father of the Qualified Herdbook.”

In presenting the award, Bill Ramsey recalled being a delegate to a national Holstein convention when the idea first surfaced, and was shot down.

“But Bill, over several years of talking, proposing and determination, not only got grades ID’d, they got genetic evaluations, classifications, papers, pedigrees and a process to upgrade to higher value for every black and white cow in America.

“You were right, Bill, the process is working, and it never hurt the value of one single registered cow,” Ramsey said. 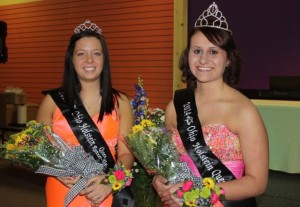 Mangun, 19, is the daughter of Roy and Lisa Mangun and is a student at Ohio State University’s Agricultural Technical Institute in Wooster, where she serves as vice president of the campus Buckeye Dairy Club. The current Ohio FFA state reporter, she has shown both Jersey and Holstein cattle at the local, state and national levels.

McDonnell, 18, is the daughter of Kyle and Becky McDonnell, and is a senior at Wellington High School, where she has been involved in the FFA. She has judged dairy cattle in FFA and 4-H, and is a junior member of the Ohio Holstein Association and the national Red and White Dairy Cattle Association.

After attending the Ohio Holstein Convention Sale, attendees were invited to tour the Whiteleather Holstein farm in Minerva and the Campbell Brothers farm in Homeworth.

At the Whiteleather farm, the family featured “Miss America,” along with her many daughters and granddaughters, in a tent where farm visitors could see the cow family lineage. Miss America, which is registered as Whiteleather Outside 367, produced 44,637 pounds of milk over 365 days. She is an outstanding flush cow who has 128 offspring.

The Whiteleather farm is home to 500 registered Holstein lactating cows, with a rolling herd average of 26,127 pounds of milk.

Many visitors made their way to the Campbell Brothers’ farm to get a look at their operations. The Campbell Brothers Inc. farm is also family owned and came to Stark County in 1944. They milk 70 registered Holsteins in a sand-bedded tie-stall barn. The current herd average is 28,100 pounds of milk.

In addition, the family farms 3,000 acres of wheat, soybeans and corn.

The tours also featured a Holstein heifer judging contest at each farm.