JEROMESVILLE, Ohio — If you like a clean-cut sheep with muscular appeal, then you probably don’t care much for the Merino breed.

They have a “dirty, greasy look,” according to Ashland County farmer Kenrick Smith.

But for Smith, who has raised and shown Merinos professionally since 1977, they’re the breed of choice. That’s because they produce some of the best quality wool of any sheep, and a lot of it. 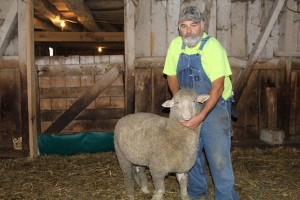 “I think they’re beautiful, but they don’t have the flash and eye appeal that some little 4-H kid is going to take, because they’re not a market animal, they’re not a meat-type animal and you’ve got to (manage) the wool,” he said. “Unless you’re a wool person, you’re not going to mess with it.” 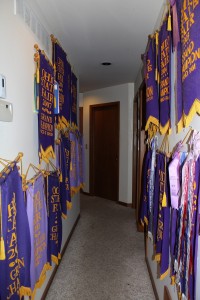 Smith, 59, is a wool person. He has won dozens of awards with his sheep and their fleece, including 14 Ohio State Fair wool championships, and various international awards.

Most recently, he took 15 of his sheep to the Keystone International Livestock Exposition in Harrisburg, Pa., where he won top honors like Best Fleeced Animal, champion Merino ewe, reserve champion ewe and champion Merino ram.

The walls inside his house are covered with accolades — banners that fill his hallway and trophies that date back to when his adult sons, Nick and Chris, still lived on the farm. At one time, the Smith family showed at 16 different county fairs, in addition to the state and international shows.

“Everything you see around here has something to do with the sheep,” he said.

His sons, in their early 30s, still help at showtime and at the Ohio State Fair. He also gets help from a close friend, Dawn McLaughlin.

Smith’s full-time job is working for a local construction company, Adena Corp. When he’s done, it’s on to his hobby: the sheep.

“After I get home from work, until I go to bed, I’m doing something with the sheep,” he said.

He took 15 sheep to the KILE in Harrisburg and said it takes at least three hours to get each lamb ready.

But, throughout the year, the Merino sheep actually are pretty self-sufficient, lambing on their own and maintaining a good temperament.

His sheep are shorn by long-time sheep expert Dave Clouser, who is the son of Charles and Elaine Clouser — the family that got Smith started in sheep.

“His bloodline is coming out of some really top-line breeders,” said Dave Clouser.

It takes genetics, Clouser said, and good care of the animals — all things that Smith has in his favor. Clouser has been shearing sheep for 45 years and he said Smith does a good job of keeping the fleece clean and making sure the sheep produce quality wool.

There’s a lot that goes into producing a good fleece, beside just the breed. Producers want a heavy fleece, and also one that is clean, according to officials with the KILE show.

If you’d like to purchase sheep or wool from Kenrick Smith, contact him by email at jvillesheep@yahoo.com, or by phone at 419-281-3101. Leave a message if he’s unavailable.

The preparation starts when the sheep is shorn of the last year’s fleece, usually in the early spring. The coat is generally shorn within 10-12 months. Keeping it on longer can damage its quality.

“You have to be mindful of everything,” said Don Hunter, a long-time contest judge for the KILE. “Burrs and weeds, clean stalls, even the way you feed sheep is important.”

He cautions shepherds to be mindful when feeding grain. The small kernels can easily fall deep into the fleece. Shepherds should keep hay low in a feeder, otherwise stems, leaves and seeds can also burrow into the fleece.

Nutrition also plays a critical role in wool production. Too little feed and the wool is low-quality, too much feed and the sheep become overweight, a danger to their health and costly for the producer.

Smith grows his own spelt and oats for feed, and his own forages, but he purchases corn. He sells harvested wool, and sheep for breeding stock.

Merino ewes can live 10 years or more and still give birth to lambs, making them exceptional breeders.

Smith has learned to balance the nutrition and breeding program just right, and he’s learning to balance his time so he has time for sheep, and for the rest of life.

The sheep wouldn’t keep the farm, per se, but they keep themselves.

“I’m not getting rich, but it’s paying for itself and I’m having fun doing it,” he said. “It’s almost a paying hobby.”