I almost missed it.

I really didn’t care two figs about who won the Super Bowl, and it was getting late after the lights went out in New Orleans and made the third quarter stretch from here to eternity. My husband had already gone to bed, but I was just curious enough to see if the 49ers could pull off the upset.

Besides, the Budweiser Clydesdale ad hadn’t aired yet, and I knew it was going to be a good one.

Then, on one of the commercial breaks, a photo of a solitary beef cow out in a snowy field commanded my TV screen. Silently, the name “Paul Harvey” appeared. And that familiar voice began.

“And on the eighth day, God looked down on his planned paradise, and said, ‘I need a caretaker.’ So God made a farmer.

“God said, ‘I need somebody willing to get up before dawn, milk cows, work all day in the fields, milk cows again, eat supper and then go to town and stay past midnight at a meeting of the school board.’ So God made a farmer.”

Harvey’s famous speech (complete text appears at the end of this column) continued as the simple ad moved through a slideshow of beautiful farm photos, commissioned from 10 noted photographers. It was wonderful, it was unexpected, and it was unbelievably moving.

A young farm girl in a pink checked flannel shirt in a field. Heaping bins of sweet corn being harvested. A farmer hefting bales of hay from the back of his pickup. A couple behind their farm market stand. A closeup of a farmer’s hands. A wheat combine. A farm family at the dinner table.

And it ended with the words onscreen, “To the farmer in all of us.”

I had to remind myself to breathe.

The ad, says the Chrysler Group in a statement, “reminds us of our shared identity and character, the greatness born out of perseverance and determination and the rewards that come from hard work.”

Paul Harvey first said these now-famous words in 1978 at the National FFA Convention. It was also published in his syndicated column in 1986, and at that time, he said he couldn’t take credit for writing it, as it came to him unsigned in the mail.

Dodge Ram, along with its partner Farms.com, is making a donation to support FFA local hunger relief efforts every time someone shares the ad video online via Facebook or Twitter, or watches it on its website (you can also scroll down to see it).

Many younger folks may not know who Paul Harvey is (my son admitted to looking him up online after seeing the commercial). The veteran radio broadcaster (1918-2009) was a fixture at the ABC Radio Network for 51 years (51 years!), and he’s best known for his “The Rest of the Story” pieces.

“Tears in my eyes”

“Made me proud to live this blessed life of a farmer.”

Of course, cynical online commenters everywhere had to turn the commercial into a blast against “industrial agriculture”, or called it an advertising ploy. “Marketing, pure and simple and pathetic,” said one response on the Huffington Post.

I choose to ignore those voices, and instead see the ad in its simple sincerity — a tribute to an undervalued and underappreciated farm community. A farmer who — regardless of farm size, philosophy, commodity or location — works harder than anyone outside the farm circle realizes. A tribute to the social fabric the farm community weaves still today. A tribute to complete strangers who can be family, bonded by the soil or the sow.

It was our two minutes of fame in the sun. And it was enough.

The cows still need milking, the waterers unfrozen, and the stalls scraped. The baler still needs fixed, the heifers bred and the fences mended. The crops still need planted, the fields harvested, and the world fed.

Text of the Paul Harvey speech: 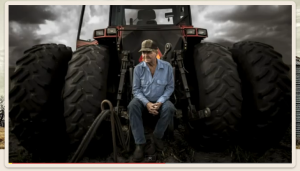