NEW YORK — Many people prepare for the arrival of Christmas months in advance.

The first traces of wrapping paper and decorations arrive in stores as early as September, transforming the holiday into a much more secular celebration than its modest Christian beginnings.

See our infographic at the bottom of the page!

Despite Christmas being an important date in the lives of today’s Christians, the holiday failed to gain prominent status until relatively recently. Research indicates that as late as the 19th century, Christmas was not even a legal holiday requiring a day off from work. That’s why 19th century readers of the classic Christmas tale, A Christmas Carol, were not shocked at Bob Cratchit having to work on Christmas Day.

The U.S. Congress used to meet on Christmas Day because it was not a national holiday. In 1836, Alabama became the first state to officially recognize Christmas, but it didn’t become a legal holiday across the country until June 26, 1970.

Today’s Christmas celebrations include traditions from around the world.

Some ascertain it was the Church’s doing to schedule Christmas at a similar time to the pagan festivals, such as Saturnalia, that took place during the winter months. But many biblical scholars argue this was not the case. Some pagan influences, such as holly and mistletoe as well as the burning of a yule log, have long been a part of Christmas traditions.

Santa Claus is one of the more recognizable symbols of Christmas. He is based on St. Nikolas, of Myrna, an area that is part of modern-day Turkey. St. Nikolas is the world’s most popular non-Biblical saint and is one of the saints most portrayed by artists. Early depictions of St. Nikolas show him as a stern man who delivered his share of discipline. Eventually, those depictions changed to show a figure more associated with generosity.

Throughout history there have been characters from around the globe, such as the Viking deity Odin, who were precursors to Santa Claus. Myth states that Odin rode his eight-legged flying horse in the winter. Odin gave out gifts to well-behaved children and punishments to those who misbehaved. Children would fill boots or stockings with treats for the flying horse.

Regardless of the origins of Christmas, today it is hard to deny Christmas is a commercialized success. It is a national holiday not only in the U.S. but also in other areas of the world, and it is best known for the tradition of giving presents to others.

In fact, many people head to the stores well in advance of the Christmas holiday to purchase the presents on their shopping lists.

The shopping season tradition may be traced back to the time of World War II, when it was necessary to mail gifts early to the troops serving in Europe so they would be able to open them in time.

Merchants realized this concept could be used when gifting troops as well as private citizens, reminding shoppers to make their holiday purchases early so they could mail them to relatives near or far. As a result, the advanced shopping season was born.

Although many people feel Christmas begins when the first bag of tinsel appears on a store shelf and ends when the last present is opened Dec. 25, the true religious holiday does not coincide with merchant schedules.

While most people are bustling to and from department stores and malls, Christians are participating in Advent, which was traditionally a solemn season of reflection and fasting. Christians are supposed to spend Advent preparing for the birth of Jesus Christ and the joy that ensues during the weeks leading up to Dec. 25.

Similarly, the joyous time of Christ’s birth is a day of celebration that does not end Dec. 26 but continues for 12 days until the Epiphany, also known as Little Christmas, when Magi were reported to have visited the infant Christ and give him gifts.

Although the more traditional day for gift-giving would seem to be on the Epiphany, by the time that day arrives many people have already taken down their Christmas decorations.

Christmas is a holiday steeped in many different traditions, and many people have their own ways of celebrating all through the month of December. 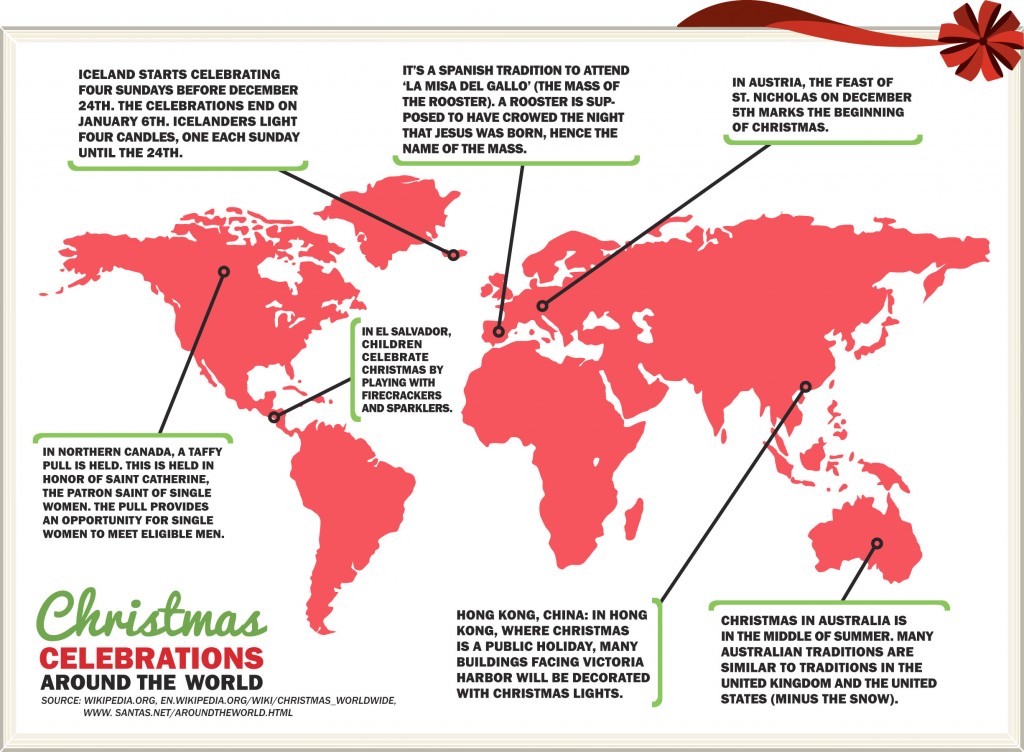