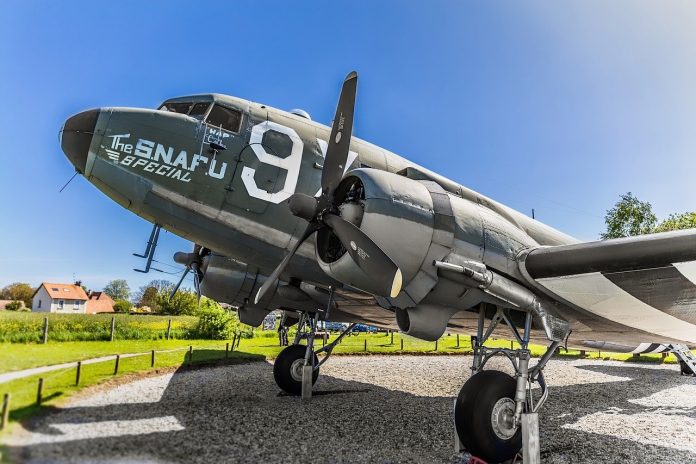 A month after Pearl Harbor (Dec. 7, 1941), President Franklin D. Roosevelt said, “the superiority of the United Nations in munitions and ships must be overwhelming. So overwhelming that the Axis nations can never hope to catch up with it.”

Americans responded with weapons of all sorts and in incredible quantities. Once the U.S. got tooled-up, the industrial leviathan buried the Axis powers in output.

Planes, ships and tanks got the most public attention, but munitions were no less impressive: armored cars, rifles, machine guns, artillery pieces, torpedoes, radios, search lights and thousands of items. General Dwight D. Eisenhower after World War II, said, “that four weapons helped most to win the war — the C-47 Skytrain/Dakota transport, the Jeep, the bazooka, and the atomic bomb.”

The C-47 transport was as easy to recognize as the P-38 twin-engine fighter and the B-17 Flying Fortress. Also known as the “Gooney Bird,” the C-47 was the most widely used transport aircraft of World War II. It carried soldiers through the sky of Europe and supplies over the Himalayas in the Pacific War.

The C-47 was the military cargo version of the Douglas DC-3 commercial plane that first flew Dec. 15, 1935. Two Pratt and Whitney engines turned the three-bladed metal propellers at an output of 1,050 hp cruising at 7,500 feet. The standard C-47 could carry 27 troops or 24 litters.

The Skytrain usually flew with a crew of three, up to five when transporting for an airdrop. Maximum speed was 230 mph and a range of about 1,600 miles. The C-47 was built by the Douglas Aircraft Company in Oklahoma City and outside Chicago at Orchard Place.

Used by the British as well as the U.S., the C-47 fulfilled roles as diverse as paratroop dropping, supply delivery, air ambulance, gunship, photo surveillance and glider tugs. During World War II, the Army purchased 10,123 aircrafts and the Navy just over 800.

Many C-47 planes are still in museums, in storage fields of the southwest U.S., and flying in the skies of some Latin American countries. In 1947, the U.S. Navy flew six ski fitted C-47 from an aircraft carrier to Antarctica in support of Admiral Richard Byrd’s exploration.

On Feb. 10, 1942, reporters, workers and managers congregated at the end of the assembly line located at River Rouge, Michigan. A Ford V-8 came down the line; it was the last Ford car to be built until World War II was settled.

For the next three years, the same assembly line would build bomb service trucks, navy trucks, staff cars and the most famous wartime vehicles of all — the Jeep. Ford Motor Co. made the Jeep also at its plants in Dallas and Louisville. A total of 277,896 Jeeps were made by Ford during World War II.

The Jeep prototype was built by the Bantam Car Co. in 1940. Because Bantam lacked the production capability, the first military contract for 18,000 vehicles was awarded to Willy-Overland Motors in August 1941. Ford would be the lucky bidder after the winter of 1942 for the M-38 utility vehicle, as it was officially called in military contracts.

Jeeps were used by all branches of the services and from President Roosevelt down to privates. This rugged vehicle had many uses as a litter carrier, a heavy machine-gun transport, staff car, welder Jeep with generator and electric arc-wilder, a-tow vehicle of one quarter ton trailer, and anything else that the G.I. Joe could imagine. The vehicle contained a four-cylinder engine, a four-wheel drive traction unit and a road speed in excess of 60 mph.

The all-metal Jeep was an open vehicle with a canvas top that afforded some protection from the sun, rain and cold. The vehicle was 11 feet long and 5 feet 2 inches wide and weighed 2,600 pounds. The origin of the term Jeep is not known but may have come from the military contract letters G.P. indicating general-purpose vehicle.

To fight tanks. the Army invented the bazooka. It was a light shoulder-held rocket launcher that provided an infantry company with a weapon to counter German tanks. The smooth-bore, electrically fired weapon hurled a rocket projectile about 300 feet.

The bazooka tube was 54 inches in length, with a diameter of 2.36 inches, and propelled a 3 1/2 pound projectile at a target. Normally one soldier fired the weapon and a second soldier served as a loader. The weapon folded in half for carrying and storage.

Introduced in 1942, the bazooka was only marginally effective against a heavy tank. It was effective, however, against a tank’s tracks and the soft spots where the armor was weak. During World War II, almost a half million bazookas were produced and the weapon remained in the Army’s inventory through the Korean War.

In October of 1939, Albert Einstein, a German-born physicist, sent President Roosevelt a letter. The letter contained the following: “an extremely powerful bomb of a new type might be constructed, and such a bomb was being explored by German physicists.” In August of 1941, several British scientists arrived in New York with gifts of research and technology that might be helpful if America joined in World War II.

From Einstein’s letter and the information disbursed by the British, America launched what would soon be named the Manhattan Project to build the atomic bomb. Teams of scientists had to figure out how to turn theories into research that could produce a usable weapon. To accomplish this, a cluster of large secret facilities had to be built for their work.

The Manhattan Project controlled hundreds of millions of dollars’ worth of facilities, material and machinery at Oak Ridge, Tennessee; Hanford, Washington; and Los Alamos, New Mexico, plus smaller college activities elsewhere. The project recruited the leading physicists in the U.S. — Enrico Fermi (University of Chicago) built the pile that produced a chain reaction achieving the first self- sustaining nuclear chain reaction.

The large army of workers at Oak Ridge produced uranium, not knowing what its purpose would be. Plutonium was churned out by the workers in Hanford who were walled-off behind guard gates and barbed wire fence. Robert Oppenheimer was in charge of the secret location some 20 miles southwest of Santa Fe that tested the atomic bomb.

Los Alamos was so covert that it had an address of only P.O. Box 1663. At Los Alamos, they tested U-235 or plutonium that resulted in Little Boy (Hiroshima) and Fat Man (Nagasaki). A formula on a chalkboard became the most decisive weapon of them all.

At the Tehran conference in 1943, Soviet leader Joseph Stalin offered a toast: “to America production, without which this war would have been lost.” Stalin was not exaggerating.

The mobilization of U.S. industry was under way before Pearl Harbor. It was escalated in 1942, and hit its stride in 1943, producing weapons that “Ike” said contributed most to winning World War II. That’s your history!