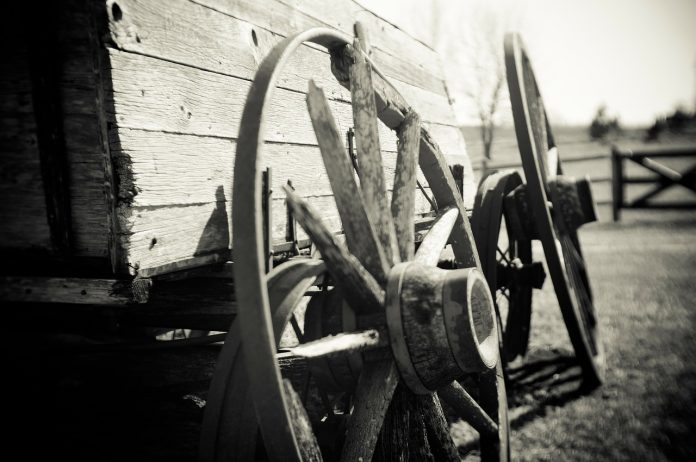 A book called The Day of the Bonanza, by Hiram M. Drache, was published in 1964 and chronicles the rise and fall of the huge “bonanza” wheat farms in the Valley of the Red River of the North during the last quarter of the 19th Century.

Forming the border between North Dakota and Minnesota, the river flows north into Canada and empties into Lake Winnipeg.

The fertile valley was ideal for the use of large farm machinery, being flat and treeless with no stones or rocks and in the 1870s consisted of mostly uninhabited public lands.

The Northern Pacific Railway Company was chartered by Congress in 1864 to build a railroad through the northwest to the Pacific and was given almost 39,000,000 acres of public land along the proposed right of way.

After three years of expensive construction and mismanagement by railroad officials, the Panic of 1873 hit, the NP went bankrupt, and all construction stopped.

Desperate for money, the NP tried to sell their millions of acres at $5 each, but public opinion agreed with Minnesota’s governor Henry Sibley, who remarked that the Red River Valley was “fit only for Indians and the Devil.”

The NP’s outstanding bonds were worth only about 10 or 20 cents on the dollar since the bankruptcy but many of the northeastern businessmen who held large numbers of these bonds agreed to exchange them for vast tracts of this land, hoping somehow to recoup their losses.

NP company president George Cass and NP director George Cheny traded their bonds for several thousand acres and hired Oliver Dalrymple, a wheat farmer who, at the time, was broke due to speculating in the grain trade, to manage their new holdings which became the first of the successful bonanza farms.

Dalrymple steadily acquired land of his own and by 1890 the Cass-Cheney-Dalrymple farm in Dakota Territory, totaled 70,000 acres, the largest of all the bonanzas.

The farms were so large they spawned no end of furrow stories.

One told of the man who worked for “a Mr. Dalrymple who had the biggest farm that ever lay out of doors.”

One day Dalrymple set up stakes for the man “to strike out a land for breaking, and he started out with four horses on a walking breaking plow, and plowed a furrow that was over 40-miles long, and so straight you could snap a chalk line in it from one end to the other.

They plowed straight for two days, and Dalrymple asked the man if he thought they had gone far enough.

The man replied, “I hope you don’t go any farther, or we may never get back,” and this is how the town of Hope got its name, it being near there that they turned back at the end of the furrow.

Another story from the 1880s said, “I’ve seen a man on one of our big farms start out in the spring and plow a straight furrow until fall. Then he turned around and harvested back.”

In reality, the usual field size was a section, or 1 square mile, making the first round 4-miles long. These sections were commonly plowed by a group of 10 or 12 plows under a foreman.

The plows would make two rounds on the morning of the first day and three in the afternoon. It would take about a month for the gang to plow a 640-acre section.

Four-mile furrows are a lot less than 40, but still difficult for eastern farmers to imagine.

Plowing the tough prairie sod was a tremendous job. The first breaking was done in June and July by a 12-inch walking plow pulled by four horses, turning over between one and two acres per day.

During September and October, the land had to be back-set, or cross-plowed, so the ground was less lumpy for spring seeding.

These plows could do 5 acres per day and 10 could turn over a section in two weeks. The Cass-Cheny farm plowed 8,170 acres in the fall of 1879 with 32 gang plows in 51 days; they had 158 mules on the property that year and an unknown number of horses, along with 100 men.

A photo of a bonanza barnyard shows a row of these gang plows, each with a single handle extending to the rear and no seat, so the plowmen (and their teams) still had to walk all those weary miles.

Only the more valuable implements, such as separators and steam engines, were stored under cover. Plows, harrows, seeders and binders were used heavily and wore out quickly, making housing these machines uneconomical.

As soon as the frost was out in the spring the plowed ground was attacked with wooden-framed, spike-toothed harrows that were 20-feet wide and pulled by four horses.

Each harrow could cover 40 acres a day, a big advantage when thousands of acres had to be harrowed twice to fit the ground before seeding, and then three times after the wheat was sown, once to cover the seeds and twice to kill weeds.

Until the late ‘80s, when drills came into use, 8-foot broadcast seeders were used to plant an average of 18 acres each per day.

The spring planting had to be completed quickly to take advantage of the best seeding time and to avoid a big variation in the time the crop was ready to cut.