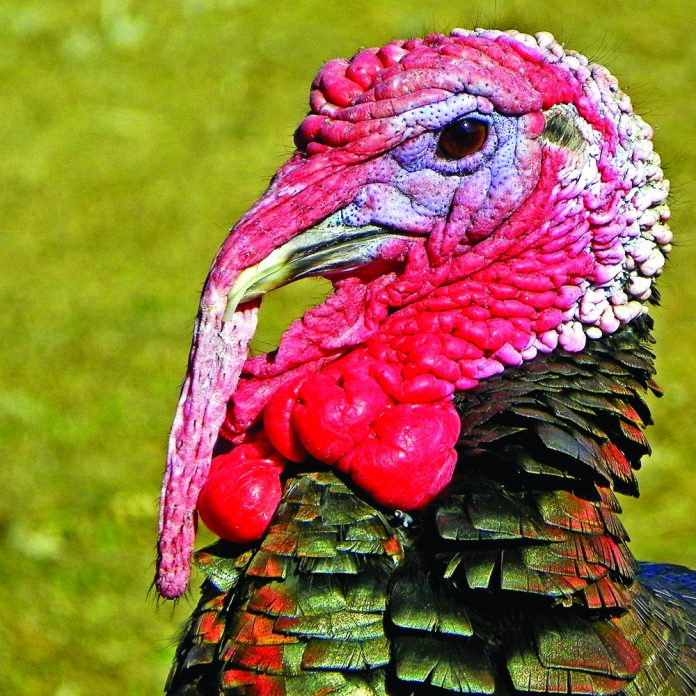 Thanksgiving is almost here, so let’s talk turkey. Anyone who has ever tried to get a good look at a wild turkey knows they have incredible eyesight.

One moment you’re looking at a big bird; then you blink your eyes, and it’s gone. You swear you didn’t move a muscle, but obviously you did. And now, after trees have lost their leaves, the problem is exaggerated.

Whether you’re a birder or a hunter, clearer sightlines give a huge advantage to turkeys. A turkey’s disappearing act is especially impressive for a bird that can weigh more than 20 pounds, run 25 miles per hour, and fly in short bursts more than 50 miles per hour.

One reason turkeys are so elusive is that their eyes are among the most sophisticated in the vertebrate world. They can detect even slight movements at great distances.

That’s how they detect predators such as coyotes, bobcats and great horned owls.

And if turkeys can avoid approaching predators at a distance, deadly attacks can usually be prevented.

Human retinas, by comparison, contain just a single type of rod and three types of cones.

Based on the abundance of cone cells, it’s clear that turkeys have excellent color vision. That makes perfect sense given the brilliant, multicolored, fleshy heads male sport during the spring mating season.

These cone cells are sensitive to UV light, so they see things that we cannot. (This is also true for many other birds and mammals.)

Turkeys’ sensitivity to UV light puts inexperienced turkey hunters and birders at a disadvantage. Even if observers remain motionless, clothing can make even a stationary observer impossible to miss.

Laundry detergents that “whiten and brighten” clothing leave behind a UV residue. And the more often clothing is washed with these detergents, the more UV residue they accumulate.

This is also sometimes true for brand new clothing, even camo gear. Anyone wearing camo clothing or old favorites that have been washed many times almost glow to the eyes of turkeys.

One remedy is to wash your “turkey clothing” with detergents that do not have brighteners. Read the label.

Turkeys also have excellent peripheral vision. Like most birds their eyes are positioned on the sides of their head giving them a field of view of approximately 270-degrees.

Combine that with a flexible neck that can turn almost completely around, and turkeys can see 360 degrees with just a slight turn of the head. It’s no wonder they spook so easily.

One drawback to turkey eyes being positioned on the sides of the head is that they lack three-dimensional vision. Though this would seem to be a significant disadvantage, they compensate by bobbing their head up and down enabling their eyes to gather information about relative distances and apparent depths of field.

So, lacking true 3-D vision is not a problem for turkeys. Thanks to razor-sharp vision, sensitivity to UV light, and near 360-degree field of view, wild turkeys are hyper-vigilant regarding their visual environment.

That’s why getting a good look at them in nature is so difficult. Whether hunting or birding, a better strategy might be to simply watch from a comfortable spot at the base of a big oak tree (they love acorns).

This, however, is probably not a safe tactic during turkey hunting season. As we enjoy Thanksgiving dinner with family and friends this week, appreciate some of the biological adaptations that make turkeys the noble birds that Ben Franklin argued would make a suitable national symbol.

And if it’s within your means, volunteer or donate some cash to a local church or food bank that provides meals for those less fortunate.