Many of us feed hay this time of year, but how many of us actually know what we are feeding?

Yes, I feed so many bales per day so I know how many I need to get through the rest of winter, but is the hay you feed adequate for the specie, age and stage of production? If you don’t know, then you are guessing about the quality of your hay.

I always heard “first baled is first fed.” For spring newborns, that probably will be true, but, again, if you’re not testing your forages, how do you know?

Without a forage analysis, what can we visually look for? We can look at color, texture, stage of maturity, molds, insects and weeds. A nice green color doesn’t always mean it’s of high quality. A nice green color would usually indicate a high protein level and vitamin content, but the hay could also be high in nitrates and low digestibility.

Hay that is soft and flexible indicates a less mature plant, compared to tough, thick stems. One can also look for the presence of seed heads of grasses, indicating stage of maturity. Hay should not smell old or musty or have the presence of dust, all of which indicates mold. Weeds and insects not only can reduce nutrient value, but some are also toxic.

If we look at three forage samples as an example, two of the samples are from first cutting and one is a third cutting hay. All three samples have a nice green color and variances in maturity when evaluating the orchard grass in these samples. There’s no presence of molds, insects, but a few weeds.

Fortunately we have sent these samples to be analyzed. Looking at the results (see Table 1) can you tell which samples might be first cutting and which one is third?

You could look at Crude Protein level, Total Digestible Nutrient (TDN), Dry Matter (DM) or Relative Feed Value (RFV). Forage analyses have much more detailed information than what is included here, but that’s another discussion.

Next we need to know what the requirements are for the livestock we are feeding. In this example, we will look at beef cows with an average weight of 1,200 pounds, that have a peak milk production of 20 pounds.

The three stages of production listed in Table 2 are for the last trimester, first month after calving and peak milk production according to the National Research Council (NRC, 1996). 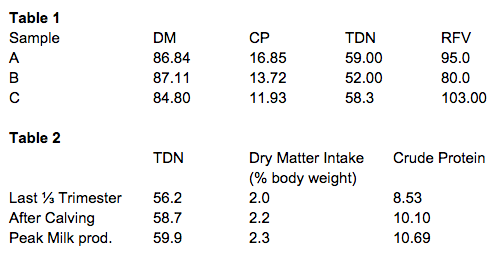 If we compare the forage analysis to the requirements needed, what are some of the possible deficiencies? Protein levels appear to meet requirements for all three samples. Our Energy or TDN levels for sample A and C look like they would work for the last trimester and after calving, but fall a little short for peak milk production. Sample B is low in TDN for all stages of production.

When we do the calculations, forage sample A appears to be sufficient in protein for all stages of production and energy for late gestation and at calving.

During peak milk production, energy is only 0.25 pound low, doesn’t seem like much. However, it would require 1.5 pound of shelled corn to meet the energy level of a cow at this stage of production.

Sample C has the highest Relative Feed Value and very similar to sample A in TDN. It also contains enough protein for all three stages of production. Energy is sufficient for the last trimester of gestation, however it would require 0.3 pound of corn at calving and 1.5 pounds of corn at peak milk production.

I hope that this exercise helps to reinforce the value of testing your forages. We focused on energy in this example; mineral content of the forages, especially calcium and phosphorus, varied among samples and would require some additional supplementation as well.

The tests are relatively inexpensive compared to the value of knowing what you are feeding and when it is needed.