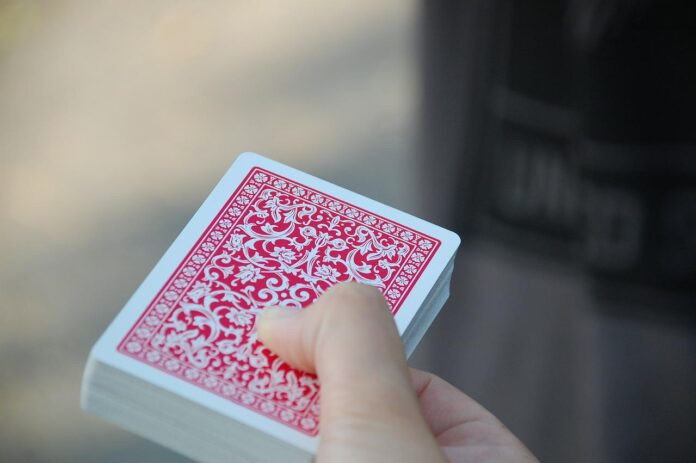 I remember my maternal grandparents sitting at their kitchen table, while I played with toys at their feet, both stirring their Sanka coffee and getting things ready for a round of dominoes. Always curious, I wanted to know if I could learn to play the next game.

“Do you want to play the winner?” my soft-spoken grandfather asked. “I’m going to be the winner of this one,” he said with a wink.

The legend of the game over their lifetime of marriage tells that they bet one nickel on each domino match. They passed the same nickel back and forth as the years rolled on.

Anyone who lived in the country learned that playing games was in some ways the entire entertainment package in the days before television and much later, the internet. My sisters taught me how to play Go Fish and Old Maid, and I vaguely recall another called Uncle Wiggly. We played the simple card game we called War thousands of times, it seems.

My Aunt Marilyn taught me to play Parcheesi, with a nearly worn-out board showing generations of wear. I learned to make matches of three, then later to count by fives by playing gin rummy with my mother while my big sisters were in school.

Nearly every weekend, it seemed, my parents invited friends to play cards or we were welcomed into the home of one of their friends. Everyone in those days, it seems, owned a card table and chairs and packs of well-worn cards. The game of choice tended to be euchre.

Children had the bonus of free time with other kids, playing outside if the weather cooperated. The big kids were in charge, and we knew to listen. We were called inside when darkness fell, treated to Kool-Aid and popcorn.

All of her adult life, my mom belonged to a Canasta club. When it was her turn to host, we helped clean as if the queen was coming to call, and drooled over the rare treats Mom prepared. If we were lucky, there would be leftovers to share.

My memories include board games of Clue, Sorry, Aggravation and lots of checkers. Chinese checkers was a big favorite. The television was rarely on, though there was often music playing softly from the radio. I learned to grow my vocabulary with Scrabble, not even realizing this was my mother’s intent.

When the game of Yahtzee showed up, the novelty of rolling and counting dice was exciting and new. No matter what we played, there were few distractions.

We concentrated on the game, and one of the biggest lessons was taught every single time we played: we learned how to be diplomatic winners and good losers. And we learned to clean it all up and put it away. It would be ready for the next round of masterful competition.