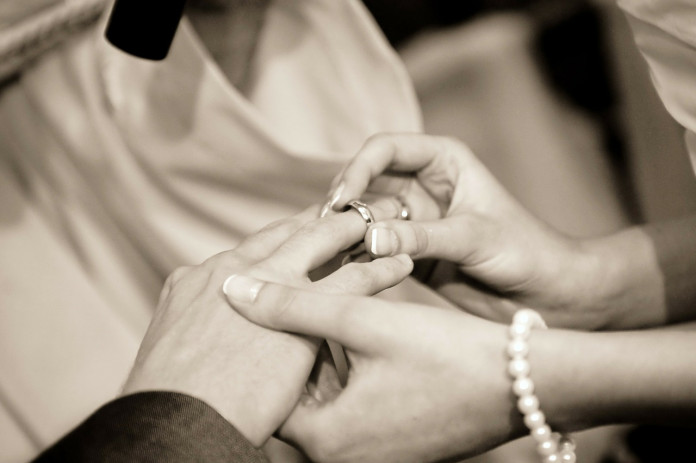 Last night, a handsome gentleman came sneaking into my bed in the wee hours past midnight. Fortunately, it was Mr. Wonderful.

As I awoke, very briefly, I said to him, “Gee honey you are so quiet, I didn’t even hear you come in.”

I swear to you that no sooner had I spoken the man left the bedroom, went downstairs and proceeded to rummage loudly in the desk for the charger for his Fitbit.

This included a trip back up to the bedroom to ask me where it might be. At 1:30 a.m.

Keep in mind this is a fitness gadget that does not need to be charged at 1:30 a.m. on any morning ever. This, my friends, is marriage.

Well, this and not putting a pillow over his face when his fidgety self finally settles down. I swear it was easier to put one of our children down to sleep than this man. He means well.

To his credit, I am also a lot to take most of the time. I am famous for expecting him to diagnose car troubles over the phone. I call him up, “yeah, it’s doing this thing, and there’s a light, and I don’t know?”

Honestly, he’s gotten good over the years. He even knows what I mean when I say “it’s kind of like a grinding but more like maybe a whine?”

He translates “Kymberly’s car sounds” to mechanics like a champ.

He also is very patient with my constant rearranging of our kitchen. Every so often I just get a bug in my ear to move all the bowls to a different cabinet or spoons to a different drawer.

I might mix up the spice storage, too. I always act like everyone knows this and become immediately annoyed if items are not returned to their new home.

He’s been a saint for more than two decades of tracking down spatulas like a bloodhound on the scent.

The poor man just wants to make an egg, and it’s a scavenger hunt.

For his part, he likes to leave things in the most outlandish of places. Need a drill? Check the bathroom? His shoes? Under the dining room table. (Why???)

He is definitely a function over form person. He cares little for how something looks and greatly for how it works.

This means that your best bet in finding anything he has touched is to look where he last used it. It’s probably still there.

On the flip side, I prefer form over function. I will make you walk two extra rooms over to get a jacket because the idea of storing them near the door doesn’t “look right.”

I have a fuzzy white shag run in the living room of a house situated on a hill made entirely of mud for the same reason. For one brief, shining moment, it looked good. He just laughs and says “it looks fine dear.”

He pretends to listen to my long, sometimes pointless, stories about my day and I do the same for him. I hear antics of people I have never met and grow fond of them anyway. He does the same for me. This, is marriage.

If you find yourself married to the same person for more than two decades, and you publicly anoint him “Mr. Wonderful” (which, in retrospect, was kind of a recipe for creating a big headed husband), you might find yourself fielding questions from people asking how you make marriage work?

It starts with hearts and flowers and breathless infatuation. It ends with not smothering a man in his sleep (no matter how tempting) because he woke up you up, or him not leaving the room just because you snore (or so they claim).

In our rare fights, I have been known to snap, “well, this has to stop or the next 40 years is going to drag!”

It doesn’t matter how loud or messy the other person is, you’re all in.

Some days it will feel like most of your marriage is spent swearing that the other party never told you that or yelling “what?” from another room.

On the other hand, it’s always having someone who can pretty much figure out what you mean even if you refer to “y’know, the thing, with the thing, that goes in the thing?”

All I know is that despite declaring it a “Hallmark holiday” I was engaged on Sweetest Day (because you never listen dear) and courthouse married with a $200 diamond ring.

Years later it’s still the best investment I ever made.