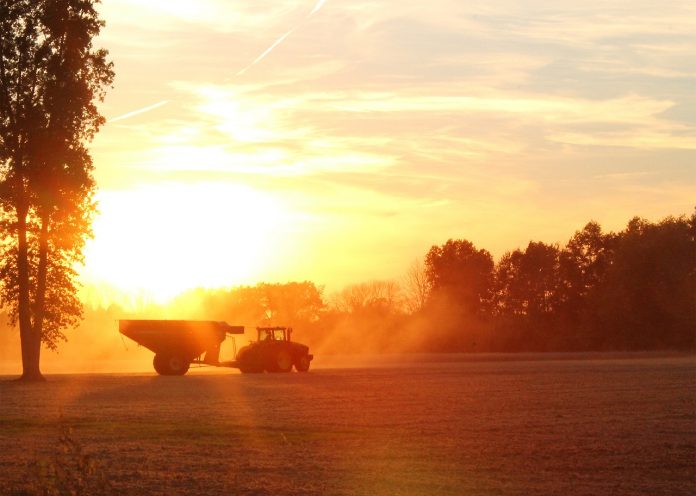 I have seen two fields of soybeans that are starting to change color this week. These first harbingers of fall remind us that the big harvest push is coming.

Once more, farmers gird their loins for long days, short nights and the hope of dry weather after wishing for rain all summer (although not in the East this year).

Coming are the days when the housework gets neglected, and wives take to trucks and combines to keep things moving. A big calendar page has been turned, and we’re on to the new crop year.

For the ag statistician, the new year started September first. The agricultural calendar runs from September through August.

We started this marketing year with a quick and deadly Hurricane Ida, which made landfall very close to the United State’s largest collection of export elevators.

Early damage reports say it will take as long as a month to get them moving again, what with physical damage and the long time needed to repair electricity infrastructure.

The impact of the elevator damage is not as great as it could be, since we were running out of grain in the country and were not exactly piling it up in stalled barge tows.

There will be no NOLA (Northern Louisiana) bid for some time, however.

The U.S. Department of Agriculture gives us new reports Sept. 10, and there are some procedural changes.

USDA announced this week that they will use Farm Service Agency data on planted acres since it is supposedly more complete than normal. This is expected to add a million acres to the report getting us to 93.7 million corn acres.

If we also increase yields, this could result in bearish numbers.

However, crop conditions, as reported by USDA, are worse than normal. The result could be no real change, even though currently we think record yields in the East will make up for the mid-summer drought damage from the Northwest.

Traders are looking for around 172 bpa in a wide range. Look for the yield to dominate trader thinking. Regardless of acres, if the yield slips in this report, markets will go higher.

There has actually been some harvest in Southern Illinois, as farmers there were trying to cash in on the basis as much as 80 over December futures for some quick shipments. That premium has gone away in some cases because of the hurricane-caused collapse in NOLA basis.

Local ethanol plants, however, still have some quite huge premiums as they keep the fires burning until full harvest.

The reality that the 2021-2022 crop will be as tight in supply as this past year’s will continue to support prices. The market currently expects the report to show a carryout for next year at 1.25 billion bushels, which is very tight.

Any way we look at it, we can have a big crop and still be tight. That tightness is maybe even worse in soybeans.

Traders expect to see next year’s carryout at around 13 to 150 million bushels. Much of this comes from the fact that the carryout for the year ending in August just now is 375 million bushels down from the previous year. Thus, we keep pushing the shortage ahead.

We now think the soybean crop will have a yield of 50 bushels, but even 51 leaves us very tight for the second year.

We continue the trend we have talked about in previous columns of having lower highs. That defines a downtrend, and it is getting stronger.

We started the month of September at $12.70 November futures. That was more than $2 off the June high.

It is worth noting that the December wheat futures were off six cents last week, but are still at high prices, trading at $7.261⁄4 Sept. 7.

The wheat party is likely not over, but the excitement remains in the Minnesota market for hard red spring wheat.

The spring wheat had lower acres and was burned up with drought. 10 bpa yields were not unknown in places. There is no substitute for the high protein spring wheat, and the Canadian crop is just as bad or worse.

The result will be continued higher prices as the supplies are rationed, and there will be spillover into the Chicago markets.