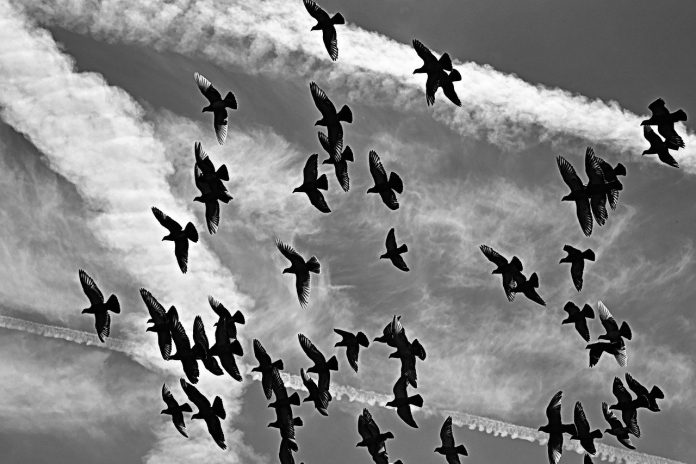 If you peruse the historical literature of the United States, you find stories about a bird that flew in the sky in flocks measuring up to 5 miles long and a mile in width. The bird was so numerous that the sun was blotted out for half a day at a time.

By the 20th century, this bird had disappeared from the sky above and the earth below. It was extinct. The bird was the passenger pigeon (Ectopistes migratorius), meaning the wanderer.

The passenger pigeon was about the size of a turtle dove but had a long wedge shape tail, black in color, and white undercoating. The bill is black, the iris of the eye is red and a head marked a dusky blue. The breast and belly are faint red. The legs and feet are red while the neck is marked with violet, green, gold feathers. The female is more drab-colored above and a dull white beneath with only a trace of the male brilliance around the neck.

The passenger pigeon was known to be innumerable and widespread over the eastern U.S. It hunted with ease eating raspberries, strawberries, acorns, beechmast, grain, grapes and chestnuts. It migrated from Canada in late September to the southern American colonies and returned in early spring, following the food chain. Numbering in the millions, the pigeon’s nest or city locations were the most numerous in pine forests.

As late as the American Revolution (1776-1781) no agreed name or stable identity was established, it was simply a wild pigeon. By the end of the 18th century, the wild pigeon of the New World had been noted with little or no fanfare as a source of food or the size of flocks.

There were several mentions as to their annoyance to farmers. On one occasion, the passenger pigeon so swarmed and ravaged the crops that a Catholic priest threw holy water at the flocks as if they were demons. Amidst the exertions and tribulations of exploration, hardship, and excitement of colonial life the pigeon was paid little attention. Perhaps, it didn’t stand out amidst the richness of fauna and flora of the New World wilderness that was comprised of pigs, bears, squirrels, woodpeckers, deer, turkeys, wolves and other sources of food.

The pigeon was well-known, however, to the Indian nations, especially to the Seneca and Iroquois tribes. The pigeon was a natural wealth for their taking and a principal source of food in their diet along with the deer and wild turkey.

When the spring flock appeared, scouts followed and located the nesting. The nesting city might be as long as 20 miles and six miles wide. The Indians would cut down the trees to get at the squabs. Thousands were gathered each day, smoke-cured, and packed for transport back to the village. The entire affair was like a carnival or picnic.

The 19th century may well have been the apex of the passenger pigeon, but the abundance of the bird seemed hardly in doubt. Reports by credible individuals estimated the “pilgrim bird” at an 1847 meeting in Wiseon, Michigan, at 1,120,140,000, an Iowa flock at 600,000,000 and John Audubon, the well-known ornithologist, quoted an Ohio citing of 528,000,000 over a five hour period.

An individual might think these numbers irrelevant since an observer could not see the entire flock, flying in layers and over such distances. Irrespective of verification, the number of passenger pigeons flying the American skies was huge and observers described the wing noise like thunder, the flock in motion like a river, and a low-flying flock above a cabin like a tornado.

Other eyewitnesses viewed the flocks to clouds, gales, whirlwinds and hurricanes. Writers after the Civil War said that the flocks resembled armies, legion, regiments and brigades.

There was an escalating human appetite for nature’s food and the skins, feathers and heads adorned the fashion craze. In the period from 1870 to the end of the century, “the age of extermination,” all species of game birds were on the high road to eradication.

Whether instinct, custom, or business were to blame, the killing of passenger pigeons ran clear across our society. At the height of the slaughter, 189,000 birds were being shipped weekly by train to Chicago in 450 barrels each packed with 420 birds. The exterminators came with nets, long poles, clubs, BB guns, shotguns, smudge pots and even felling trees.

The sport of trapshooting using live pigeons was also in vogue. By 1890, a number of states had passed legislation thinking the passenger pigeon might yet be saved from oblivion. Most of these laws were ignored, poorly enforced or scoffed at.

The American Ornithologist Union, founded in 1883, came late in the day for the passenger pigeon. The A.O.U. created the Audubon Law which was designed to protect all non-game birds. While several states adopted this law, it came late in changing the hearts and minds of most Americans about bird-life.

For obvious reasons – the dollar value of game and plume birds, the armed status of law-breakers, the resistance of citizens in a culture of individualism to regulations – little was accomplished in enforcing even minor protection for the passenger pigeon. There was enough blame to go around.

By the 20th century, the landscape of America had changed. The tranquil equilibrium of previous years had disappeared. The balance of people, forest and pigeons was disrupted. The passenger pigeon left their territorial marks all over, eastern North American, places like Pigeon Creek, Pigeon Park, Pigeon Hills, Pigeon Falls, Pigeon Hollow and a list goes on.

The last living passenger pigeon, a hen named after America’s first lady, Martha, died at the Cincinnati Zoo on Aug. 29, 1914, at 2 o’clock on a sunny afternoon. That’s your history!