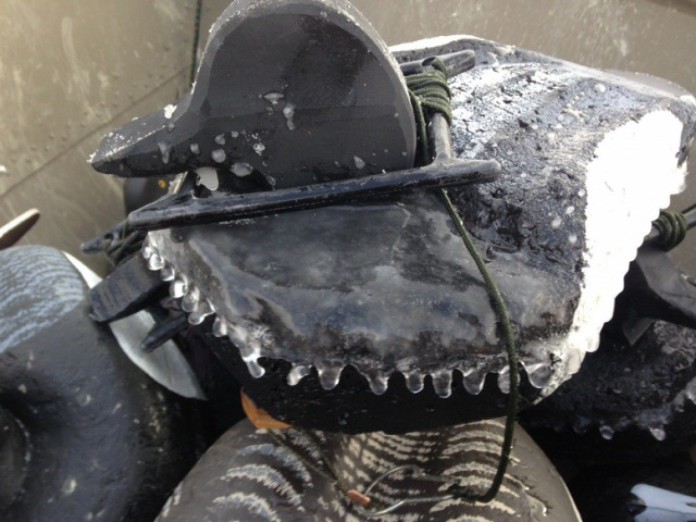 DEVILS LAKE, N.D. — Can you spell Polar? Now add the word Vortex to it and you have Polar Vortex, something unheard of before recent extra cold weather driven by hard winds from the northern Arctic’s open-door freezer was given the tag.

Indeed, global climate change is responsible for not only warmer overall temps, but other odd ball regional and seasonal changes including such unwelcome and extreme cold.

So also learn to spell the word “extreme”.

Get used to it

Understand that Devils Lake, North Dakota, is both a city located just a few miles from the Canadian border and a sprawling lake that licks year around at the town line guarded by a man-made, earthen dike that separates town and lake.

But understand that cold weather is an expectation in this neighborhood, a part of life that sells a lot of heavy parkas, bulky gloves, and engine warmers that drivers plug in at night.

We expected that long johns and mittens would be the dress of the day when we left Ohio for the long drive to Devils Lake, and the outer garments we packed matched those expectations.

The trip was planned for months, designed around our hope that the waters of Devils Lake would be holding flocks of migrating diving ducks that annually find the lake a favored stop-over on their way to more temperate wintering grounds in the south.

Divers are tough birds, able to stay on large open water for weeks after other ducks have migrated to more hospitable waterways. Divers like bluebills, goldeneyes, and redheads are the last to leave and they are favorite targets for us.

Us, being good friend Paul Fedorchak and me.

We both enjoy shooting from a layout boat, a low profile one-man craft that floats almost unseen at water level. This trip was to be all about divers and open water layout boat hunting.

Our drive to Devils Lake followed a route through Minneapolis and we made it just as the city was being smothered by a dozen inches of snow, a real good reason to yank the lever that engages four wheel drive.

It was about that point in the trip when the weather forecasters started using the term Polar Vortex, a weather phenomenon that would instantly change the previous North Dakota nighttime lows of mid-teens to something unbearable with feel-factors well below zero.

Incidentally, learn to spell feel-factor because it is the new chill-factor.

We found the open waters of Devils Lake temporary home to hundreds of divers just we hoped.

We also found the lake to be ready to freeze over and the launch areas already slippery, as waves washed the ramps, turning the sloped concrete into sliding boards.

We were prepared for the conditions but not for the winds that roiled the open water into a sea of whitecaps and angry waves. Hunting was good for a couple days but ice buildup became a factor that warned us of the predicted Vortex.

Ice covered the cork decoys as soon as the first waves washed over them. Snow showers, frozen this and ice-covered that did the rest.

Mid-week we awoke to very limited visibility as the snow flew hard in horizontal sheets. A painful wind pushed the feel-factor far into the sup-zero, frostbite region. The ramp we had been using was awash in waves and our determination to complete our week-long mission blew away with the 30 knot winds.

Can you spell ‘risk’?

The word danger entered our conversations and we already know that spelling it wouldn’t change the fact that asking for trouble was not a smart thing to do.

It took one full and busy hour to uncover the ice-covered boat cover snaps, but that was the order of the day as we admitted defeat and bowed to the Polar Vortex.

The only good thing about the early departure from Devils Lake was learning that a Polar Vortex is a deal breaker and a good reason not to be outdoors, let alone in a boat amid floating chunks of ice.