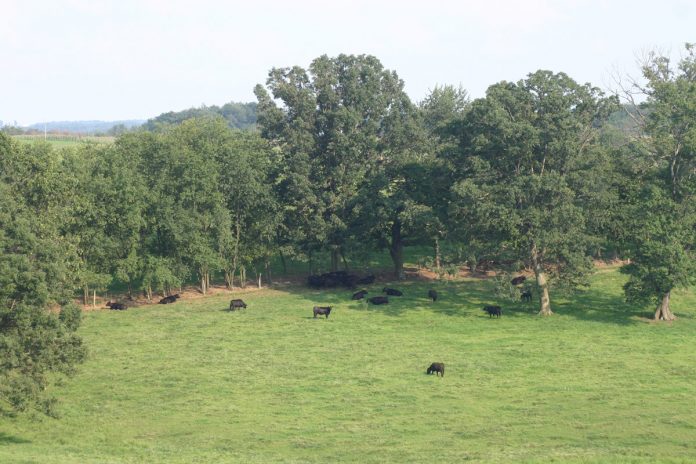 With the current situation, I will admit that I have not conducted much field scouting, but I have seen a couple of hay fields that have cressleaf groundsel, a winter annual that was first found in Ohio around 1990 and since has spread throughout the state.

Some taxonomic guides put this plant into the Senecio genus but recently was placed into the Packera genus. Cressleaf groundsel has been more noticeable the past couple of springs with the cold, wet weather and very little field work being done in many areas of the state.

Cressleaf groundsel reproduces only from seeds and emerges as a rosette in the fall and then bolts, flowers and goes to seed in the spring. Bolting stems are hairless, hollow, grooved and can reach heights of three feet with inflorescences that have six to 12 yellow ray flowers.

The flowers are like other species in the Aster family, with ray (outside) and disk (center) petals. The outer ray will normally consist of five to 15 petals that are bright yellow, and the inner disk will be a more golden yellow in color.

Plants will eventually produce seeds that resemble those of dandelions. The seeds are small with a reddish to brown tint and have a feathery pappus that makes them easily carried by the wind.

It is currently included in Ohio’s noxious weed list due to its poisonous characteristics. Pyrrolizidine alkaloids are the principle toxins in these plant species. The quantity of toxin varies with the species and growth stage; however, the young pre-flowering plants are the most toxic.

One study showed that acute liver necrosis and death in one to two days has been associated with feeding 4 to 8% of an animal’s body weight with green plants. More common is a chronic poisoning where animals consume small amounts over time.

These toxins are not destroyed if the plants are dried and baled; ensiling will decrease the concentration of the toxin but not eliminate them. Typically, we will see poisoning issues from this plant and others when we are experiencing drought conditions, or the animals do not have access to quality forages.

Cressleaf groundsel normally does not regrow after the first cutting of hay, but our goal should be to prevent it from becoming established in the field.

Products that can be used to control this weed and others can be found in the 2020 Weed Control Guide for Ohio, Indiana and Illinois. One downside of using these broadleaf herbicides is that they also damage legumes such as alfalfa and clovers in pastures and hayfields.

For additional information on identifying weeds, go to u.osu.edu/osuweeds/.