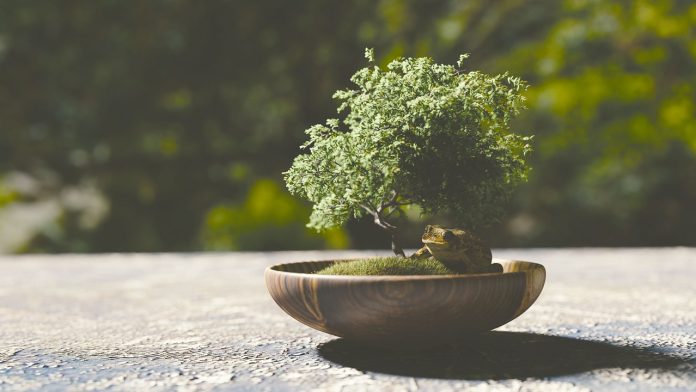 Every parent wants their child to be creative until that creativity leaves a trail through the house. In the case of my youngest son, he not only leaves a trail in our house but around the garage and into the woods.

When something grabs his attention, he becomes a funnel cloud swirling around, completely wrapped up in the idea. The expression, “down the rabbit hole,” also could be used to describe him when he has a new focus.

After visiting Phipps Conservatory in Pittsburgh, he set to work creating a garden train display in our basement. Every obstacle became intertwined in his creation. Tracks went around workout equipment and under the craft table.

When adding landscaping to the area surrounding the track, he suddenly remembered that he saw bonsai trees at the conservatory too. Changing gears, he abruptly began researching bonsai trees.

Often mistakenly thought of as a specific type of tree, bonsai trees can be any tree or shrub that is dwarfed by pruning. The roots and foliage have to be trimmed and cared for in a manner that keeps its size small.

I have to admit, there’s something intriguing about exquisite miniature trees. His new funnel cloud sucked me in too. I had to know the history, amount of varieties, and artistic methods for creating bonsai trees.

Together, we entered the research phase. Like other trees, bonsai trees can live to be very old. With multiple generations caring for a bonsai tree, it could live to be well over 800 years old.

One of the oldest known trees is the Ficus Bonsai Retusa Linn tree in Crespi, Italy. Residing in a sunny arboretum, the tree’s height is ten feet tall. It was transported from China to Italy in 1986 to be featured in the Bonsai museum.

An impressive feature is its dense trunk and extensive root system resting in a large pot fired in a single block. The pot is the largest Bonsai pot in the world. The tree is thought to be a millennial, over a thousand years old.

Sometimes it’s not the age or height that makes a bonsai tree famous and well-loved. Rather, it is the story of the tree that carves its way into the hearts of visitors. Housed in the U.S. National Arboretum, is a Japanese white pine that survived the atomic bombing on Hiroshima. It is a symbol of peace and connection between the U.S. and Japan.

It is only 390 years old and barely a few feet tall, but makes a big impact on visitors. It was cared for by five generations before it was a gift to the United States from bonsai master Masaru Yamaki for the nation’s bicentennial celebration.

Stunning examples of bonsai trees are maple and ginkgo, as well as other deciduous trees that have dramatic color changes in the fall. Satsuki azaleas make sensational bonsai trees with their brilliant blooms between October and June. Evergreen trees are also a popular choice.

Bonsai is a living art form. Like other art forms, there are variety and style variants depending on personal preference. My son and I wanted to try a variety that was considered easy for beginners.

We settled on a jade tree and a fica plant. I decided we needed two plants to increase our odds of success. My husband laughed when he heard that bonsai trees lived for centuries. He reminded me that our oldest house plant was maybe six years old.

After watching innumerable YouTube videos, and reading several websites, we gathered our supplies. Careful shaping and pruning is the most crucial step. If I’m honest, our trees fall midway between normal looking and completely bare.

Small, shallow pots are an integral part of what makes a tree a bonsai tree. The small pots also create specific care needs like frequent watering and need for fertilization.

Some things in life I over-contemplate, other things I just jump in. Our bonsai tree experiment is the latter. Only time will tell how this all works out.

From what I gather, it is more about the journey these little trees take, a living memento, a piece of artwork that is never finished.

“Unless it dies,” my husband chimes in. Shhhhh … let’s hope for the best, life is more enjoyable that way.