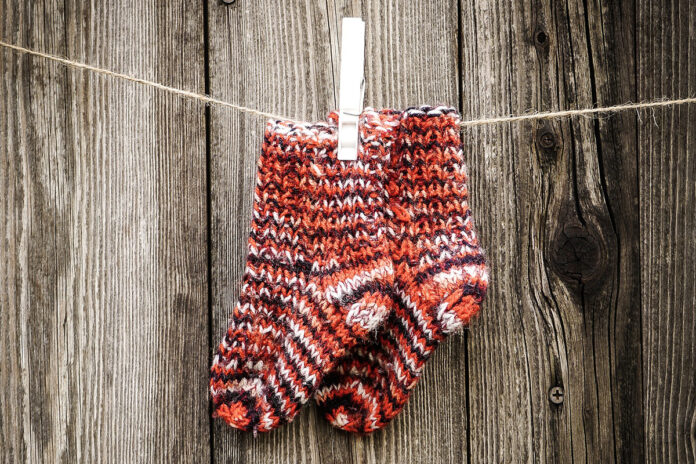 I woke up today in a funk. I overslept after staying up too late and felt overwhelmed before I’d even begun. For one thing, the house was messy. Not a lot messy, but every corner seemed to contain a tin teacup from a kitchen playset, or a broken matchbox car and at least two or three random legos, despite the fact that we’d just cleaned the first floor the day before.

Even the cuteness of our puppy jogging down the path for his morning walk, even the bedheaded kids in cozy pajamas with rosy cheeks, even homemade waffles for breakfast couldn’t break through my funk. I circled the house, attempting to tidy up, but mostly tallying my grievances while the malaise thickened like a gathering fog.

“Where does this stuff even come from?” I said out loud, bending over to pick up a dusty baby sock that hasn’t fit anyone in this house for years.

Suddenly a fight over whether or not to make a cushion fort broke out in the living room. High-pitched screaming and shouts ensued, which only deepened my weariness.

“Let’s go upstairs and do our morning jobs,” I said faintly.

With beds made, jammies hung up and daytime clothes donned, we all felt a little better. The kids returned to cushion fort construction with new vigor, but I returned to circling and lamenting.

“Cabin fever,” I thought to myself. “I’ve got cabin fever.”

Yes, by March, contracting cabin fever at least once is inevitable, a truth as old as cabins themselves. Even a relatively mild winter with some well-placed thaws doesn’t make up for the vast hours spent between the same four walls for months on end.

Wandering around my living room, baby sock clenched in my fist, I realized my late winter ennui wasn’t just about the boredom of being housebound, however, it was also a result of a related condition: “Stacking Bales Syndrome.”

Stacking Bales Syndrome, or SBS, can descend at any time, not just the winter months, and sadly is not exclusive to those of us living in remote rural areas. In fact, symptoms of SBS can be found in artists, office workers, high school students and perhaps most common of all, in stay-at-home moms.

To truly understand the syndrome though, we must first look at its antithesis: actually stacking hay bales.

Actually stacking bales of hay is hard work. Whether gathering and stacking small square bales, which can be done by hand, or stacking round bales, which requires a big machine, it is tedious and time-consuming, but at the end of the day, there’s a tidy mountain of feed, tangible evidence of one’s effort and an insurance policy against hunger. You now can feed the animals that will eventually feed you.

Most of the work of modern life is the exact opposite of stacking bales. The fruits of one’s labor take the form of emails that disappear into the ether as soon as they are completed. Days, months, years of life are distilled into thin columns in a stock portfolio, which provides as much security as it can before the next market correction.

As for the stay-at-home mom who once had a circle of peers and elders to forage, or weave, or plant with while a gaggle of children played nearby, she must now care for her babies mostly in isolation, and instead of a full root cellar, or a yard of fine cloth, or a field of sprouting corn, the sum of her labor often feels like little more than returning the same toys to the same bins again and again.

Whew, did I mention I am in the throes of a SBS as I write this? Thank goodness there’s a cure. Like any crop, the seeds of joy require cultivation and care, but they are a sure antidote to SBS.

So today, instead of stacking bales, I will count my blessings, letting gratitude take root. Remembering to do this is a different kind of labor, but the yield will last long after winter’s end.