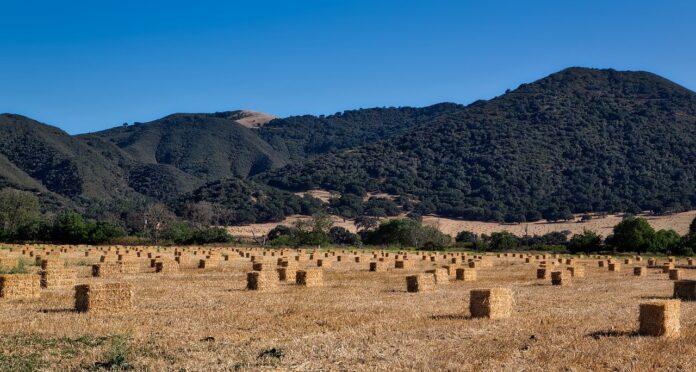 I’ve listened to my father tell of how they put up hay.
They stacked it loose, then tromped it down.
That was the only way.

He said, “We had a hayin’ crew of 10 to 12 good men.
Those country boys weren’t scared of work.
That’s all they knew back then.
“The crew would claim the bunkhouse, where the bunks were stacked to three.
If you didn’t snore your chance of sleep was zero guaranteed.

The men would get an early start, but first came ham and eggs.
“They ate a lot,” my father said.
“They all had hollow legs.”
Each morning grandma cooked.
She’d fry three dozen eggs or so.
She said, “A hearty breakfast keeps a body on the go.”
The work was nothing new to them, and now it’s never seen.
They worked so well together like a finely tuned machine.

Someone was always kidding ‘cuz they loved to joke around.
But they knew how far to push it. Might get pounded in the ground.

At 12 o’clock the workers stopped to rest and get renewed.
The horses ate their bags of oats.
The men wolfed down their food.

They’d take an hour, then back to work right up to supper time, then line up at the water trough to wash off dirt and grime.

There were no skimpy appetites.
Those men sure loved to eat.
At night the cook out-did himself, with chunks of beefy meat.

They’d head back to the bunkhouse.
Some played checkers up till dark.
But most of them were sound asleep before night made its mark.

It wasn’t just about the hay.
‘Twas camaraderie.
But those hayin’ days have changed, I’d say, from pure necessity.

And now I look out in the fields and watch a farmer hay.
So much is automated.
They say we’ve come a long, long way.

He’ll climb down off his tractor, take a gaze out on the crop.
And thinks about those men who’d work so hard they’d nearly drop.

He’ll even start to wonder, thinking ’bout those days of old when men would rather work than play.
He says, “I guess God broke the mold.
“But I’ll bet he’ll tell a story, when his hayin’ days are through, of how he put the hay up with his dang near one-man crew.