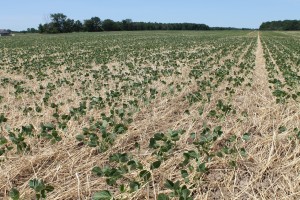 (Part two of a two-part series. Click here for part one)
WOOSTER, Ohio — If you’re like most earth and climate scientists who believe climate change is real — then the question becomes, what do we do?

A simple option is do nothing.

But if the data is right, greenhouse gases would continue to rise exponentially, and so would the average temperature of Earth and the weather extremes.

Climate scientists warn the Earth will likely warm anywhere from 2 degrees to 11.5 degrees in the 21st century, bringing with it more heat waves, inclement weather and fatalities.

Roger Wise, president of Ohio Farmers Union and a crop farmer from Sandusky County, said it’s anyone’s guess what will happen, but he sees more issues with insects and disease and a northerly movement of the growing region.

“We have a huge carbon footprint and that’s something that we need to be leery of,” he said.

Although farming is a known cause of greenhouse gas emissions — about 7 percent among human-based activities — farming also can help mitigate greenhouse gases and climate change.

One of the breakthroughs for farmers happened 40-50 years ago, with the development of no-till farming — the practice of planting without tilling the ground.

Pickaway County crop farmer Bill Richards understands no-till about as well as anyone. The acclaimed conservationist is known among peers as “the father of no-till” for his work to help pioneer the practice in Ohio. Today, it’s the main farming practice on his family’s 3,000-acre grain farm.

“I speak out for no-till because I really think that that’s the one thing that can be done that really builds soil quality,” said Richards, who was chief of the U.S. Soil Conservation Service in the early 1990s. “It saves expenses and, in the long run, will increase yields.”

No-till reduces trips across the field, which means less emissions from tractors and farm machinery. But it also is a proven way to sequester carbon from the atmosphere and increase organic soil matter — so long as it remains untilled.

When tilled, microbes are stimulated to convert organic carbon to carbon dioxide, which escape into the atmosphere. In most farmed soils, tillage has caused the release of 40-60 percent of original soil carbon, according to data from Michigan State University Extension and the U.S. Environmental Protection Agency.

Of the 7 percent of greenhouse gases that agriculture emits — soil and fertilizer management are No. 1, followed by ruminant livestock, manure management, rice cultivation and the burning of crop residues.

Phil Robertson, director of climate studies for MSU’s Kellogg Biological Station, is leading research to determine the extent to which farmers can “manage field crops with biology rather than chemistry.”

It includes using fertilizer more responsibly, and encouraging practices like no-till. He spoke during a climate change workshop in July, where he said no-till farming mobilizes nutrients, and can pull methane out of the air, in addition to sequestering carbon.

He recognizes the need for farmers to be profitable, and to use fertilizer along the way. But using the right amount makes a huge difference.

“We’re trying to design a system that would not create a yield loss for farmers,” he said, while at the same time, “help farmers more credibly take on the stewardship hat that they already have.”

According to Robertson, plants will use (uptake) an optimum amount of fertilizer and it’s OK to apply that amount. But if farmers over apply, the plants fail to use the excess and it can cause an increase in nitrous oxide and other greenhouse gases.

The key, he said, is getting farmers to “fertilize back to the optimum,” so they save themselves money and prevent potential damage to their environment.

By using grass, “you sequester a lot more carbon,” he said, than by growing grain crops. With grass, only the top of the plant is grazed, so the plant stays alive and the cycle of growing and sequestering “starts all over again,” all season long, he says.

But the grass versus grain battle includes many factors, and there are some potential climate incentives to feeding grain, rather than grass.

“It is hands-down that you get more greenhouse gas production per pound of product with the grass-fed animal that’s been around for 18 months,” he said. “That fermentation and that rumen from forages is not as efficient as when there are more grains in that diet.”

As it concerns ruminants, he’s not even convinced that greenhouse gases have increased.

“Greenhouse production in the United States is probably no more today (for ruminants) than it was then, and at most, 30 percent more,” he said.

The reason is bison. What we tend to forget, he said, are the 30-80 million head of bison that roamed the United States, which were 1.5 times the weight of a mature cow and only consumed forages.

Another mitigation option is to adopt policy that would limit the amount of greenhouse gases farmers and businesses can emit, and crediting them for meeting the requirement.

This is often called “cap and trade,” and in 2008 was a heavily debated concept in Congress that ultimately failed.

Brent Sohngen, agricultural economist with Ohio State University, said the initial legislation had problems with how it was presented and handled, and he doubts it will be back any time soon.

But Sohngen said the concept of setting emission caps and crediting farmers who meet those caps makes sense.

There have been multiple recent attempts for a voluntary method of cap and trade, or carbon credit trading, but Sohngen believes it will take a mandate to get enough participation.

“I think all of that (voluntary) stuff is fine,” he said. “I don’t think they will have any impact. … What you need is sustained action over a lot of years.”

The American Farm Bureau Federation strongly opposed cap and trade legislation in 2008 and 2009, with their Don’t Cap Our Future campaign that argued food prices and the cost to produce food would all go up if farmers were limited to a certain amount of emissions.

Andrew Walmsley, the organization’s director of congressional relations, said one problem with mandating an emissions cap is that other countries could continue to pollute and emit as they choose.

“Other countries wouldn’t necessarily be forced to change their impact,” he said, adding the Farm Bureau remains “opposed to any mandatory regulation.”

But Walmsley said the organization does support voluntary carbon credit trading, which can provide farmers with an additional source of income if they’re able to reduce carbon and sell the credits.

The other side. As negative as climate change might seem, farmers also need to consider the “positive” effects.

On the upside, farmers in traditionally cooler climates — like the far north — are seeing a longer growing season and the potential to plant new types of crops. On the downside, farmers closer to the equator are seeing their crops become heat damaged, with lesser yields and sometimes a complete loss.

“The reality is that climate change has had both negative and positive effects on agriculture,” said Ohio State’s Sohngen.

As he sees it, climate change has always shaped where we grow our crops and what crops we grow, and we react as it changes.

“Agriculture is ‘climate adapted,'” he said. “Where we grow crops is a reflection of climate change.”

The changes he’s most concerned about are those that could cause “negative adaptations.” It might mean lower yields, or the abandonment of certain crops in favor of others.

Economically, some farmers could actually fare better from climate change, he said, because less of a crop usually means a higher price for that crop. But it could also mean a shorter supply of feed for livestock and a tighter world food supply, according to some farmers.

Sohngen said it’s important to take action on climate change, and that farmers “could be a huge part of that solution.”

But whatever happens, farmers will continue to adapt.

“We can expect continued evolution,” he said.