The 31-year-old has placed third, second, and now first in the Ohio Auctioneers Association’s annual bid call contest at the state fair in Columbus.

Andrews won the honor July 30 by topping roughly 30 other auctioneers from around the state.

The contest requires participants to sell one item, with proceeds benefiting a charity. This year, he sold a 106-piece Crescent tool set.

The sale is fast — usually under a minute — and participants are judged on their presentation, enthusiasm, and the clarity and rhythm of their chant.

Finalists are asked a question by the judges, pertaining to the auction business. This year it was “what advice would you give a young person just starting out.”

Andrews said “get involved” in state and national organizations, compete in the bid call contest and go to auctions.

“Kind of be a sponge,” he said. “You can sort of soak it all in and then decide what you want to keep.”

Steve is regarded as one of the top draft horse auctioneers in the country and has a long history of selling livestock at weekly auctions in Wayne and Holmes counties, in addition to farm and home auctions. Steve still sells livestock at the Creston livestock auction, where he’s been an auctioneer since 1972.

Seth is the fifth generation of Andrews to work as an auctioneer. He and his father formed a partnership in 2007 and both are licensed Realtors with Real Estate Showcase. 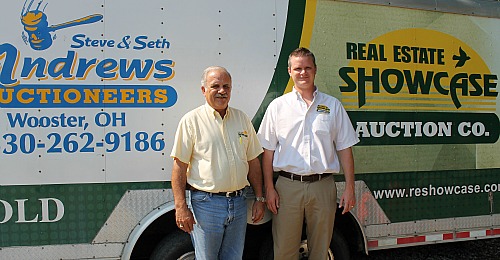 Like his father, Seth has learned the ropes from the previous generation of the Andrews family. He earned a a business degree from Bowling Green State University and attended Missouri Auction School for the 10-day training program.

Steve Andrews did his own two-week training at Reppert Auction School, then in Decatur, Ind.

“They teach you about enough to get in trouble,” Steve said, half-jokingly.

The experience-side of Seth’s education has come at the hands of his dad and the five years they’ve spent selling together — livestock, farm equipment real estate, and everything in-between.

Seth said he’s “always a little anxious” before an auction, even today, but said once the buyers show up and the bidding gets under way, things fall into place.

He said it’s disappointing when an item doesn’t bring as much as he or the seller expect.

But on the flip-side, “when something really exceeds your expectations you can kind of feel it,” he said. “After that it’s just fun — you can really kind of get into it and relax.”

New auctioneers typically do a one-year apprentice as part of their training before becoming licensed. Steve Andrews got his start under the direction of his uncle, John. Steve’s father, Robert Andrews, 98, owned the Farmerstown Auction in Holmes County from the late 1940s until 1986 and the family grew up in a house beside the auction — managing and staffing the auction barn.

“It was a huge benefit to be able to have that kind of exposure,” Steve said.

In addition to training his own son, Steve has helped train at least a dozen other auctioneers — many who are still selling successfully today. Seth said auctioneers essentially train their own competition, because of how they mentor each other. But at the same time, they’re advancing their profession and creating a good reputation for auctions.

“If you train them right you’re helping your industry,” Seth said. “You’re putting the right kind of auctioneers into your industry.”

And that’s important, because according to Steve, most of today’s auctions are run with multiple auctioneers and often from mixed auction companies. Having multiple auctioneers helps larger auctions run more smoothly and also provides another option, in case someone is ill or has a family emergency.

The father-son duo said their biggest challenge is making sure the seller’s expectations are met. While they can’t control what an item may bring, they try to talk with the seller beforehand and make sure everyone is on the same page — as much as possible.

Steve has long lost count of how many auctions he’s held — many thousand over the past 40-plus years. He admits some things are a little easier to get excited about than others — and “pots and pans” are not one of them. But he’s still energetic when the gavel is in his hand.

“You just kind of have to have a passion for what you’re doing,” he said. “You’re always trying to please the seller.”

Steve was inducted into the Ohio Auctioneer’s Hall of Fame in 2008 and is a past association president.

He said he sees a bright future for auctions because it’s one of the best ways to expose sellers to buyers, and reach a “true market price.”

And, he sees a bright future in knowing that his family business will continue through his son, he said, with a wink and a thumb’s up.

Check back later for more contest results, including the junior division winner.