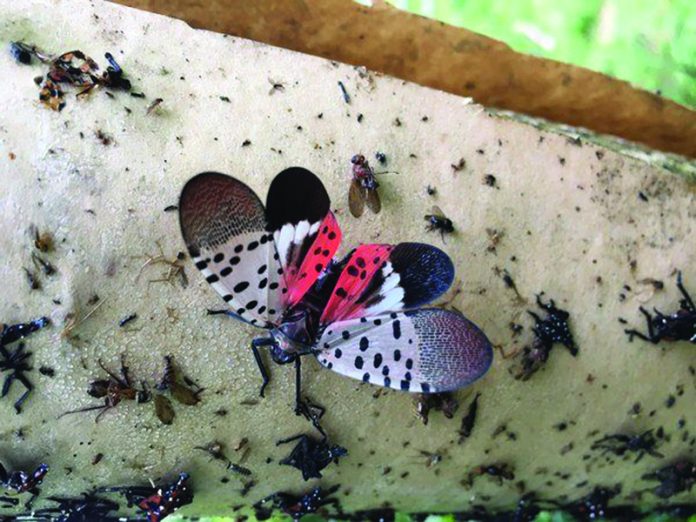 To date, the Beaver County sighting is the closest reported to Ohio.

Spotted lanternflies are invasive planthoppers, native to China, India and Vietnam. Its host plants include grapes, hops, a range of trees, and its favorite host, the tree of heaven, or ailanthus.

These signs have some Ohioans worried the Buckeye state might be the next on the pests’ list. Joe Boggs, of Ohio State University Extension, said it is likely to end up in Ohio sooner or later.

“We have no reason … to believe that it won’t make its way to Ohio,” he said.

Shannon Powers, press secretary for the Pennsylvania Department of Agriculture, said every state should be concerned. The insects often spread by hitchhiking or laying eggs on vehicles, so travelers between infested and uninfested states can be unknowing taxis for them.

“It is our top priority in terms of invasive pests right now. Our message to Ohio residents is to keep an eye on their trees and landscape and don’t hesitate to give us a call or send an email if they see anything unusual,” the ODA said.

Neither Ohio State University nor the ODA is researching the insect. The ODA said the U.S. Department of Agriculture’s Center for Plant Health Science and Technology and Agricultural Research Services typically lead research on controlling and detecting infestations, and the ODA learns from other states’ research, through the National Plant Board.

Pennsylvania has funded about $700,000 in research, Powers said. Penn State reported in 2020 that if not contained, the insect could cost the state’s economy $324 million annually.

Eric Day, of the department of entomology at Virginia Tech University, said the university has been studying the insect, and it and the Virginia Department of Agriculture have both done detection surveys.

As soon as it was discovered in Pennsylvania, Virginia, a non-neighboring state, started talking about spotted lanternflies with growers, Day said. The insect was not found in Virginia until 2018.

Although spotted lanternflies have not been detected in Michigan, the state has the insect on a watch list and includes resources and information on the Department of Agriculture website, and in articles from Michigan State University Extension.

Farm and Dairy’s request to ODA for Ohio-specific resources were redirected to Pennsylvania’s ag department website. An inquiry to the ODNR about its work on the spotted lanternfly was rerouted back to the ODA.

Although Ohio State and Ohio State Extension published articles in 2018 about the insect, a search of the spotted lanternfly on the ODA’s website brings up no results.

Other organizations, like the USDA and wine industry groups, have funded research. While the insect can devastate grape crops, research has shown that it hasn’t been as damaging to apples and some other tree fruits as originally thought.

The ODA said it focuses on educating groups that work outside, like master gardeners and foresters, who are in a position to see and report invasive pests.

Boggs said, however, that any Ohioans who travel to areas that may be infested should check vehicles for egg masses in particular, since these are harder to spot than the adult bugs.

Boggs noted that Ohio State Extension has training for growers and other people who work outside on identifying spotted lanternflies. He also said Penn State and Virginia Tech have resources on the insect.

“It’s more solid information than we have because we haven’t been able to work with it,” he said.

Since the pest is so recent, it’s hard to know the extent of its potential impact.

Boggs said no state can ever be fully ready to deal with a non-native invasive pest like spotted lanternflies since there are always new things to learn and adjustments to make. He also said, however, that information from Pennsylvania and Virginia is helping Ohio.

While egg masses were found in Beaver County, that does not mean the area is infested, Powers said. The egg masses were treated and removed, and inspectors will return around mid-May, before eggs hatch, to survey the area and remove any more egg masses they find. Detecting them before they hatch could prevent an infestation.

“We would not quarantine a county because of one insect,” Powers said, noting that the state issues quarantines when an area has an established population of insects.

In quarantined areas, the department of agriculture requires businesses that travel in and out of the counties to get permits, which involves online training on recognizing the insect and inspecting vehicles for signs of it. The department has issued upward of a million permits to businesses.

It adds seasonal employees in early spring to help it and the USDA conduct statewide surveys for the bug, focusing especially on areas where residents have reported seeing it, and areas where the data shows likely pathways for the bugs to travel.

Pennsylvania encourages residents to not only report any bugs or egg masses they see outside of quarantine areas but to kill them.

“We don’t know when spotted lanternfly may be first discovered in Ohio. The best defense for any new infestation is early detection,” the ODA said.

Ohio residents can report spotted lanternfly sightings to the ODA at plantpest@agri.ohio.gov, or 614-728-6400. Pictures are helpful for identification. If the ODA could not rule out spotted lanternfly from the pictures or descriptions provided, it would send a representative to survey the site.