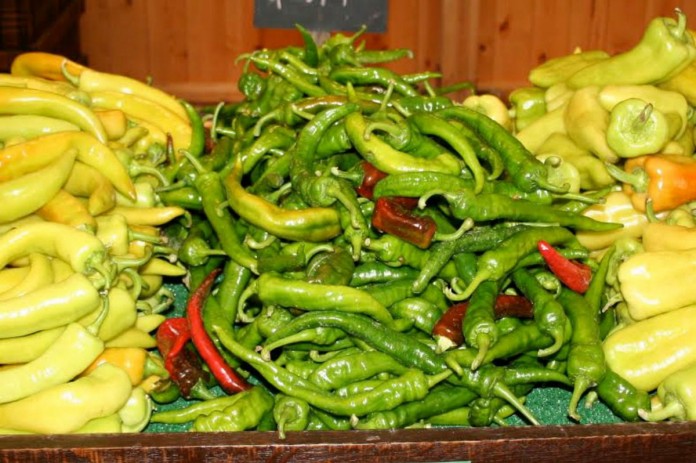 SALEM, Ohio — Terry Gram has been growing apples and peaches at Arrowhead Orchard for the past 28 years. Last year, the 45-acre hillside orchard in Paris, Ohio, gave Gram his biggest crop ever.

A couple of decades ago, much of that surplus would have been tossed out.

Now, growers like Gram can turn to groups like the Ohio Association of Food Banks and its Agricultural Clearance Program.

“If we had too much, or if it was late in the season and the cider price was not enough, we’d be dumping it,” Gram said of the years before the formation of the Ohio Association of Food Banks in 1991.

“We are appropriated money by the General Assembly and the governor, through the Department of Job and Family Services,” she said of the surplus food programs. “That funding goes toward paying a portion of producers’ picking, packing and processing costs.”

Hamler-Fugitt said they work with large and small producers of everything from apples to onions, potatoes, cabbage, lettuces, radishes, broccoli — “everything you would see in the produce section of the grocery store.”

Given the short amount of time between the product being picked by the producer and dispensed by participating food pantries, Hamler-Fugitt added, Ohio Agricultural Clearance Program produce “is fresher than anything you will find at the grocery store.”

Chicken and eggs, she said, have also become part of the program.

“Like the other surplus items in the program, we are able to pay for eggs not large enough to be grade-A and (farmers) don’t have to take them to the breakage house,” Hamler-Fugitt said.

Hamler-Fugitt said the clearance program allows her agency to procure fruits and vegetables for around 22 cents per pound, yet need still far outpaces funding each year.

“We would like to work with more farmers if we had the funding,” she said.”The number of Ohioans we serve keeps growing. In the first three months of this year we have served a little over 2.5 million people, and we regularly run out of money before we run out of need.”

“In November, cuts to SNAP (Supplemental Nutrition Assistance Program) resulted in $130 million in federal food stamp cuts and the effect of this on the poorest of the poor is really disastrous,” she said.

Charles Allen, director of product development for the Akron-Canton Regional Foodbank, said his agency is able to move millions of pounds of produce each year through the Ohio Agricultural Clearance Program.

“And I know that because of the cooperation among food banks here, other states are looking to Ohio for best practices,” he said.

Allen called hunger and nutritional issues a “global problem,” one that is mirrored locally.

“We are faced with those same issues,” he said. “The ability to reach especially children and the elderly with nutritious food.”

Gram was among the first half dozen producers who saw the long-term benefits of the Ohio Agricultural Clearance program from its inception.

“When it started, around ’97 or ’98, a group of us — five or six different apple growers — went to Columbus a couple times to speak with legislators,” Gram said. “We asked for $1 to $1.5 million that first year.”

The program began with apples, Gram said, because they did not break down as quickly as vegetables. But an increase in grower participation, as well as the program’s overall efficiency, has allowed for the variety of product, he said.

“In the early years, I delivered as far as Elyria and Logan, Ohio,” he said. “But now there are a lot more growers involved, so I stay more local, working with the Akron-Canton and Mahoning Valley (Second Harvest Food Bank of the Mahoning Valley) food banks.”

Erin Wright, who manages the Agricultural Clearance Program, has the most direct contact with producers. When the state sets its biennial budget, Wright contacts participating producers for orders directly and at various produce auctions.

”We ship to 12 regional food banks, who then ship to 3,300 different agencies,” she said. “We will ship anything from 30 cases to 26 skids. We just have to make sure it is worth it for both us and (the producers).”

The ability to quickly adjust to the needs of both food pantries and farmers is a hallmark of the program, Wright said.

“We will see what we have, and contact the food banks to see what they can handle,” she said. ‘What is good about this program is that it’s surplus based. So if we don’t have zucchini, we will take yellow squash.”

Many farmers and individuals also donate to the program, Wright added.

Wright said those involved in the Agricultural Clearance Program used to refer to it facetiously as “the best kept secret in Ohio.” Gram described it as simply the most efficient government program in the state.

“It has worked so well over the years, it’s just amazing,” he said. “And I’m totally amazed at the amount of product we go through. I have dropped a shipment off and come back the next week and they are completely empty.”

Gram attributes that efficiency to the lack of red tape involved.

“That is good for the farmer, because when you plant a crop, you don’t know what the yield is going to be. And it is good for the people who are getting good, nutritious food and otherwise may not have it.”

For that reason, Gram said, producers continue to lobby lawmakers.

“As growers, that is what we try to put across in Columbus — that the program can’t get anymore efficient, so we want to make sure there doesn’t start to be more taken off the top,” he said.

Hamler-Fugitt said her agency plans to continue its lobbying efforts for increased federal aid. But feeding an increasingly hungry Ohio is ultimately a much more complex issue.

“There is no substitute for a good-paying job with company-provided health care,” she said. “We need to get people working and having an economy that lifts all boats. We want to see people in line at the grocery store, not in food pantry and soup kitchen lines.”