WOOSTER, Ohio — The 2015 growing season continues to be a difficult one for Ohio and Pennsylvania farmers, who faced heavy rains in early summer, followed by drought-like conditions into mid- and late summer.

So far, most of the attention has been on the corn, soybeans and wheat — all which have suffered significantly.
But there’s another crop that is struggling — and it’s essential for dairy and beef farms, horses and most other livestock. That crop is hay and forages.

David Miller, an auctioneer at the Kidron Auction in Kidron, Ohio, said finding good quality hay is difficult.
“There’s plenty of hay out there. The quality is the issue,” he said.

Farmers at the auction, which sells hay and straw each week, said they’re about a cutting behind usual. Most struggled to get first cutting hay made, because of persistent rains in June and early July. Much of the forage crop over-matured or was cut and then rained on — and lost value.

But farmers who were able to bale hay on time, and with good clean stands, are getting a good price, Miller said.

The Kidron auction has been selling about 30 pickup/trailer loads of hay and straw a week, but like other area auctions, Miller said as the fall and winter seasons get closer, the amount of hay being sold usually increases. 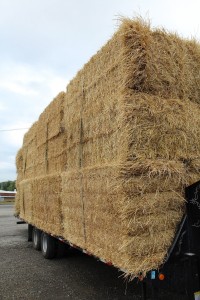 According to the National Agricultural Statistics Service only 40 percent of Ohio alfalfa was considered “good,” as of the Aug. 24 report, and only 10 percent was excellent.

Ken Flickinger, of Flickinger Farms, west of Wooster, bales about 100 acres of hay, and is still in the middle of second cutting. Asked about getting to third cutting, he said it will depend on how the rest of the season goes.

Mike Feichter, of Feichter Farms, near Massillon, said his second cutting is producing good quality hay, but he said he’s still behind on the year.

Farmers in western Pennsylvania are dealing with similar issues.

Joel Hunter, a field and forage crops specialist with Penn State University Extension, said farmers in Crawford County, Pennsylvania, are seeing a lot of improvement with the quality of second and third cutting. But first cutting, he said, definitely has less energy and protein values than it should.

“It will get used, but it’s not going to be making a lot of milk,” Hunter said.

The lesser quality hay may be ideal for certain types of livestock, like dry cows or heifers, he said. But animals that need higher energy and protein contents will require some adjustments to their ration.

Corn silage is still a couple weeks away for most farmers, and may be an alternative for farmers who weren’t able to make as much hay and hay silage this year.

The corn crop in both states is mediocre this year, which may lend itself to a better use as silage, instead of grain, Hunter said. The problem was the same as with other crops — too much rain early and the roots failed to develop — and dry conditions late, with a poor root structure that can’t reach the nutrients.

Some of the corn is already drying down, not because it’s mature, but because of poor conditions.

“It’s cannibalizing itself because we’re not getting the moisture, so it’s using up the nutrients in the lower leaves,” Hunter said.

In addition to hay, some farmers are also concerned about the quantity and quality of straw.

“Straw is more of a concern than the hay,” said Stan Carmony, a dairy farmer north of Wooster.

Most straw is made from wheat and oat fodder, and is used as a bedding material. It can also be added to some livestock rations.

The heavy rains compromised this year’s straw crop in a number of ways, including causing some of the wheat plants to lodge or lie against the ground. This led to straw that was either not harvested, or that was harvested, but with mold and rot issues.

On a positive note, experts with Penn State said there did not seem to be any spikes in fire-related issues this summer, which often coincide with wet-season harvests.

Moist hay and forages can self-combust, and experts from Ohio State and Penn State have both worked with producers the past couple years about how to avoid this catastrophe.

Angus beef cook-off is back