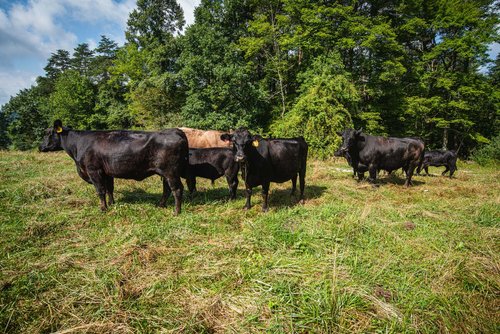 About 30 farmers have already entered the Mountain State Ground Beef program that will pay producers a premium for their cull cows and give customers locally raised, traceable ground beef. The program is a partnership between Buzz Food Service and West Virginia Cattlemen’s Association.

“You don’t have to buy a $30 filet to participate,” said Todd Meckley, one of the producers behind the program. “When you look at the versatility of ground beef. We can get these cull cows and they can be used. The producers can get a premium off these cull cows that they may not be getting at this present time. And we’re not tapping into the feeder market … This is a no-brainer.”

The idea came from a conversation between Meckley, who runs a farm in Tyler County, and Neil Bumgarner, a Mason County beef producer.

They were chatting about all the cull cows that are shipped out of state to be processed. West Virginia is solidly a cow-calf state, Meckley said. There are few feedlots and finishing operations. Most of the cattle get trucked to the Midwest to be finished or processed.

Bumgarner called Dickinson Gould the next day and got the ball rolling, Meckley said. It wasn’t hard to get people on board.

“The excitement is contagious because you realize the potential for what it is and what it could be and how you can link producers directly to people that are eating the product,” he said.

Gould runs Buzz, a Charleston-based food service company that specializes in sourcing fresh meat and seafood. The company expanded to build and operate a USDA-inspected slaughter and processing facility in Charleston called Appalachian Abattoir, that opened in the spring.

The abattoir is the first USDA graded facility in West Virginia, although there are about 20 federally inspected plants in the state.

Megan Parsons, marketing and communications manager with Buzz, said chefs asked them constantly where their beef was coming from and why it wasn’t local. Parsons said they’d gotten good at explaining the circuitous route many West Virginia cattle take to people’s plates.

Eventually, Buzz realized the need and demand for local processing was great enough to jump into the processing side of things. That’s how Appalachian Abattoir came to be.
“We can keep more of the dollars for West Virginia cattle here in West Virginia instead of being trucked out to the Midwest, fed out in feedlots and then sent back into packages here,” Parsons said.

The abattoir was the key to the ground beef program working. It was the only facility in the state with the capacity to process the cows needed to supply the program.

Mountain State Ground Beef should be available in stores in early fall, Parsons said. The price will be set by each grocery store but it will cost more than commodity ground beef as it’s considered a premium product, she said.

Producers will be paid a 5% premium over the prior day’s USDA price based on hot carcass weight. Carcasses that weigh under 500 pounds will be paid the Eastern Area Market Price without the premium.

To enter the program, farmers have to be Beef Quality Assurance certified and have verification that the animal has been in West Virginia for at least 90 days. Farmers must have verification of all vaccine withdrawal records. Producers must also agree to a farm visit from someone from the abattoir or the association.

Meckley said they looked at similar programs in other states to see what worked and what didn’t. They decided to keep the requirements simple for West Virginia cattlemen.

Once in the program, farmers can drop animals off at one of five locations throughout the state. The cows will be trucked into the abattoir from there.The cows will be required to have an RFID ear tag for traceability purposes, Parsons said.

“So, even with barrels of trim, we can trace that back to the individual farms as well,” she said. “We’re fully transparent from the time that an animal enters to all the breakdown and all the pieces of the carcass.”

To learn more about the program and how to participate, visit www.wvcattlemen.org/mountain-state-ground-beef. To find retailers that carry Mountain State Ground Beef, visit mountainstatebeef.com.