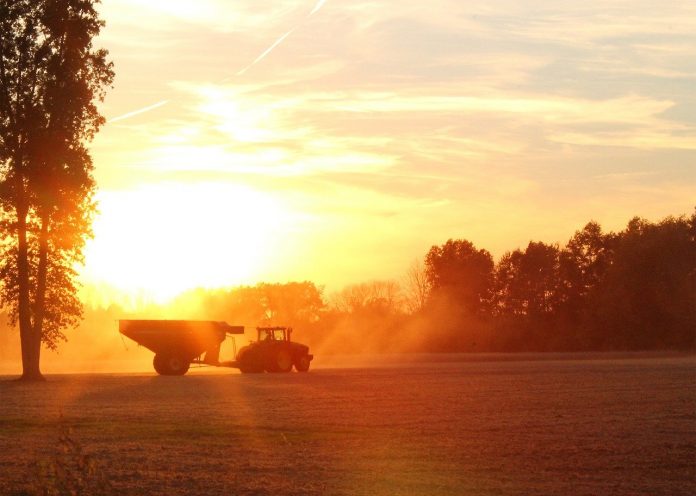 When is no news, news? Grain market prices are featured by the harvest progress, which currently is a little ahead of normal. So, no real news on the harvest is the news that is important.

We have years when progress is slow, and that affects the market. Not this year.

Pushed in some areas by drought conditions that resulted in early maturity, the U.S. is significantly ahead of normal progress on corn harvesting and slightly ahead on soybean harvest.

The nation has 66% of the corn off as of Oct. 24, ahead of the five-year average of 53%. Twelve percent was harvested in the last week to push that along, as good weather over much of the Western Corn Belt left Iowa, for example, at 60% instead of the normal 44%.

Ohio is right on pace, with 41% done against a 41% average. The soybean harvest is closer to normal. Ohio farmers have taken off 70% of the soybeans, and 72% is normal.

We have struggled a little with regular rains, or we would be ahead of normal like the rest of the country. The nation as a whole has finished at 73%.

I was party to a regional conference call Oct. 25, and reports of harvest were interesting. In some cases, farmers are surprised at the yields, given the drought all summer. In some cases, they really had 100-bpa corn yields on 185-bpa ground.

Locally, I have been surprised at soybean yields. While significantly lower than those of last year, the excessive rains in July did not seem to hurt the well-drained ground as much as I expected. In general, however, that was the cause of yields lower than in 2020, in my opinion.

Corn futures prices did manage to close over 12 cents higher this week, even with a heavy harvest that would normally cause pressure. That was partly due to a rebound from the week before when we tested the lows.

Exports were a large factor in gains, as we are bidding for corn to fill the pipeline back up. Our supplies were so low at the end of the marketing year that some exporters were sucking air.

Similarly, the soybean exports have been strong, even more than corn. We were also sucking air in those markets, but we have now sold over half of the U.S. Department of Agriculture’s expected exports for the year in just the first six weeks of the marketing year. Those are not shipped bushels, but they have been sold.

This leaves us with the feeling that exports could end up much higher than USDA is currently predicting.

The soybean prices for the week did not follow the corn pattern. We were up almost three cents for the week in the lead November contract, but during the week, we were nearly 30 cents higher and did not hold that price level.

One reason given is that the soybean yields in the East are even better than expected at the same time that the corn yields have faded a little. Traders are anticipating a larger supply of soybeans than is currently in the USDA balance sheet.

The biggest news in the soy complex is that the meal is finally becoming a higher value. We have been crushing for oil, with the meal getting dragged down to the lowest prices for a year.

Part of the meal rally may be the current thinking that Argentina, the world’s largest meal exporter, is struggling to raise beans in a dry year.

The wheat market continues to be strong, as the small spring crop dominates the markets. Minneapolis wheat futures gained 44 cents for the week, which dragged Chicago futures up 22 cents.

Adding to price enthusiasm this week was the report of early export taxes on Russian wheat. It was thought that we would see taxes, but not until after the first of the year. This new tax adds 27 cents to Russian wheat and hurts them in world markets while making our wheat relatively more valuable.

The current weakness in our dollar also helps our trading prices. The dollar has been interesting because current fiscal policy should be hurting our dollar value. We are currently printing trillions of dollars to feed government actions.

This should hurt the dollar, but in the short run, we are seen as stronger than other currencies.