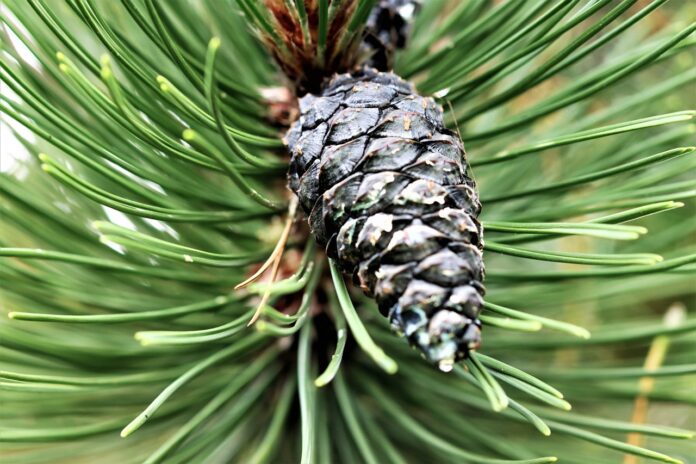 Wildlife is drawn to evergreens when the temperature drops because they provide food when it’s scarce and shelter from harsh conditions. Stands of conifers host a variety of birds and mammals throughout the winter.

In the summer, these same stands continue to provide food and shelter for mammals and birds, while also acting as host plants for many moths and butterflies.

Adding conifers to your landscape can have endless benefits for wildlife and improve the natural ecosystem in your backyard. That’s why many conservation-minded individuals choose to care for potted or balled and burlapped Christmas trees and plant them at the end of the season.

It’s a nice thought, but not all species of conifers sold as Christmas trees will have the same benefit for the wildlife in your backyard. Native conifers will have the greatest impact.

Wildlife benefits most from native plants because they have adapted with these plants over time to become uniquely suited to survive in the climates and conditions of their native ranges. They rely on native plants for food, shelter and reproduction. Adding native plants to your landscape has the most significant impact on local ecosystems for these reasons.

Learn how to choose a species of Christmas tree most suited to the wildlife in your region.

Which Christmas trees are native to your region?

Fraser fir. The Fraser fir is native to the southern Appalachian Mountains. It exists in small pockets in the mountains in North Carolina and Tennessee, extending from the southwestern corner of Virginia to northern Georgia.

Douglas fir. The Douglas fir’s native range stretches from the southwestern corner of Canada, running along the west coast of the United States through Washington and Oregon into northern California, and, following the Rockie Mountains, through Idaho, Montana, Wyoming, Utah, Nevada, Colorado, Arizona, New Mexico and western Texas into Mexico. Douglas fir populations become more sparsely dispersed in the southern portion of its native range.

Grand fir. The grand fir is native to southern British Columbia, Canada and the northwestern United States, growing in valleys and on mountain slopes in Washington, Idaho, Montana, Oregon and northern California along the coast.

Noble fir. The noble fir’s native range stretches from the McKenzie River to Stevens Pass in the mountains of northern Oregon and Washington.

Concolor fir. The concolor fir or white fir is native to mountain slopes in the western United States. It is dispersed across the southern Cascades and Sierras from Oregon to Southern California and throughout the Rockies from southern Idaho through Utah, Nevada and Colorado to Arizona and New Mexico.

White spruce. The white spruce is native to Canada and northern portions of the United States. In the U.S., it can be found in Maine, Vermont, New York, Michigan, Indiana, Wisconsin, Minnesota, Iowa, North Dakota, South Dakota, Nebraska, Wyoming, Montana, Colorado, Utah, Idaho and Washington. Expanded populations have been introduced along the Appalachian Mountains.

Eastern red cedar. The eastern red cedar has the largest native distribution of any tree on this list and is found all over the eastern portion of the United States. On the western side of its native range, it can be found in Idaho, Wyoming, Colorado and New Mexico. It has native populations in every state east of those.

How do I find a native Christmas tree?

The more local you shop, the better your odds are of finding a native Christmas tree variety. I have found a lot of the options at chain stores are non-native species. However, when I visited a local Christmas tree farm last week, I was pleasantly surprised that all the trees were native species with the exception of one highly sought-after species.

You may pay more purchasing your tree from a local farm. You may deal with more inconvenient hours. You may have to do more work yourself. However, the benefit for the environment and local economy is undeniable. And isn’t Christmas all about doing the most good?