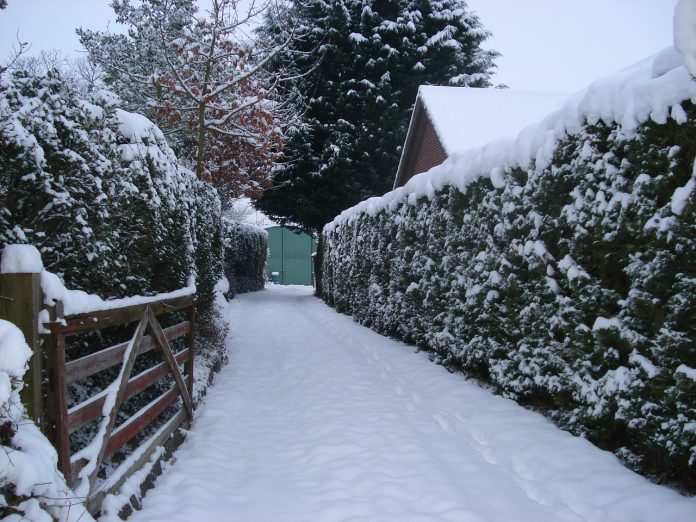 We already had our first brush with winter weather.

A couple of weeks ago, I was out shoveling the driveway and it started snowing. By the time I finished and went inside, my hair was soaked and snow was already starting to accumulate. In an hour, it didn’t even look like I had shoveled at all.

The roads were icy enough for my daughter to get her first snow day, so I can assure you the driveway was icy, as well. However, there are no snow days at work, so I walked outside to start my car. It was then, slipping and swinging my arms to regain balance, that I realized I needed to purchase a deicer for the driveway and sidewalks.

But how do you choose the best deicing product for your home? Well, there are a few things to consider when it comes to effectiveness and protecting the plants, grass, animals and cement around your house.

When it comes to melting ice on driveways and sidewalks after a winter storm, different salts work differently. The ones you’ll be able to find in stores are chloride-based. The most popular combinations of salt are sodium chloride, potassium chloride, calcium chloride and magnesium chloride.

It’s important to know which type of salt you are buying. It not only makes a difference in its effectiveness but can also help you protect the cement and landscaping around your home.

Calcium chloride is the best deicer that’s readily available to homeowners for two reasons. It works at lower temperatures than the other readily available products and, as long as it isn’t applied excessively, it won’t harm plants. This chloride-based product tends not to release as much chloride as other products and is not as toxic.

Sodium chloride, commonly called rock salt, is generally the cheapest and most widely available deicer. It’s often mixed with sand or other materials, and is only effective at melting ice when temperatures remain above 12 F. When temperatures drop below that threshold, sodium chloride won’t melt the ice. It is also considered more toxic than calcium chloride or magnesium chloride because it releases more chloride.

Potassium chloride has the highest temperature threshold and is least effective, melting only to 20 F. Additionally, like sodium chloride, is can be considered more toxic than calcium chloride or magnesium chloride because it releases more chloride.