The field day was developed to show Ohio farmers how they can use small grains on their own enterprises in different settings, whether they are planting into wheat, using wheat or other small grains for forage, or trying a new commodity like winter malting barley. The workshop also helped wheat farmers and small grain growers identify and manage disease. Eighty farmers, researchers, students and guests were registered for the event.

Eric Stockinger, associate professor in the department of horticulture and crop science in Wooster, started with seven research plots of malting barley at Schaffter Farm in 2008. “Why aren’t we growing barley for malting purposes in Ohio?” Stockinger asked, noting the winter hardiness and ability to work another crop into the rotation during the off season.

“We have terrible disease issues with spring barley.” Winter malting barley, because it is planted in the fall, heads out before diseases like Fusarium Head Blight (affecting the head of the grain for both barley and wheat) can take effect. Stockinger and his research team initiated a winter malting barley breeding program to find varieties that would adapt well in Ohio.

One aspect that makes Ohio and other neighboring Great Lakes, Midwestern and Northeastern region states attractive for winter malting barley are the soil moisture levels in the fall when winter barley is planted. It is recommended to plant winter malting barley after the Hessian Fly safe date — typically around the third week of September — which coincides with a reduced number of adult aphids that transmit viruses to the barley.

Seeding is recommended at a rate of 80-100 pounds per acre and depending on the year, yields of some of the best varieties have produced anywhere from 75-100 bushels per acre in the research plots. Winter malting barley is mature at 35 percent moisture, however harvesting at 20 percent moisture or higher makes the grain prone to damage during combining, making it unusable for malting. Researchers recommend harvesting at a moisture level less than 17 percent. Stockinger noted that while some varieties held up better than others in colder years, they don’t all possess the malting quality that brewers desire.

Maja (maw-ha) and Puffin varieties have shown the most promise for Ohio growers and Stockinger said the Puffin variety may be released commercially in the next couple of years.

We often talk about small grains (wheat and barley) for cash crops, said Lewandowski, but small grains that are used as a cover crop such as oats, winter wheat, winter cereal rye, triticale and barley, can also be used as an alternative forage. Digestible energy and protein contents of small grains are comparable to other forages, however, forage quality may change depending on growth. Crude protein ranges from 18-22 percent during the fall, winter and early spring, and drops rapidly during seed formation. Crude fiber, on the other hand, is low until seedheads begin to develop.

The most important things to take into account when using small grains for forage are moisture content and pH. A 50 percent moisture content is recommended for baleage and silage and a pH lower than 5.0 prevents botulism. Overall, small grains provide an option for fall, winter and spring grazing, but producers should be aware of nitrate toxicity and bloating.

Modified Relay Intercropping (MRI) is the planting of soybeans into headed wheat and may occur up to 6 weeks prior to wheat harvest. “Most intercrop methods look at 15-inch spacing between wheat rows,” said Lynn Ault, Schaffter Farm manager.

Lewandowski noted the important thing to remember is timing. Planting soybeans too early will cause them to be spindly. Preparing equipment is also key. Many common farm implements already in use can be set up for an intercropping system. Planning and practicing, (if possible) running the equipment in the fall with interseeding equipment. Choosing seeds varieties that are high yielding, disease resistant and early maturing will also help to make an effective intercropping system.

Another method for planting soybeans into wheat, is by crimping and rolling wheat. Seeds can be either planted directly into the wheat and followed by a crimper or wheat can be rolled and crimped with soybeans being planted into a killed mulch. This no-till method is good for organic systems offering a crimping method to kill off the wheat versus using a herbicide.

Planting into the dense mat or mulch can have its benefits and challenges. If wheat is planted densely, a thick mat can make it harder to plant into. The planter may need to be set deeper in order to penetrate the matt. “You have to get out of the cab and check your depth,” said Mike Sword, superintendent of farm operations at OARDC. “When you have a thick mat, it can bring your planter out of the ground.” On the flipside, the mat can provide a moisture and nutrient lock for the growing seed.

For 15 years, Clay Sneller, who specializes in wheat breeding and genetics at OSU, has been growing diseased wheat in the “Scab Nursery” at Snyder Farm. Sneller has over 3,600 plots of diseased wheat in various varieties, trying to determine which are the most resistant to Ohio’s most common wheat disease, Fusarium Head Blight or head scab.

“Most of the time, in farmers’ fields, I don’t find enough Fusarium to rate it,” said Sneller, who rates a plot by averaging the amount of head scab present within a field. Of the 90 fields Sneller has inspected over the years, he has only rated one for the disease. Nonetheless, head scab is still present and Sneller is working to find a breed that is resistant. So far a breed named Truman has shown the most promise in resisting the disease.

While Sneller tries to infect plants with head scab in his plot, Pierce Paul, a plant pathologist at OSU, works just a few plots away trying to kill the disease. After giving an overview of how different wheat disease affect the plant, Paul shared how various management practices such as crop rotations, tillage and fungicides can help prevent them. Paul walked guests to the research plot through rows of wheat, each with different levels of disease infestation and different approaches to treating the disease.

This year, 21 counties reported stripe rust in their wheat fields, which Sneller said is rare for Ohio. Sneller said our milder winter attributed to the increased cases of the rust. “It has to have a living host to survive,” said Paul.

Clay Sneller, wheat breeding and genetics specialist at OSU, talks to attendees of the Small Grains Field Day in Wooster, June 14, about disease resistance. In his “Scab Nursery,” Sneller infects wheat varieties with Fusarium Head Blight (or head scab) in order to test each variety for resistance. Head scab, while common in Ohio wheat fields, has not posed a substantial threat in commercial fields. (Catie Noyes photos) 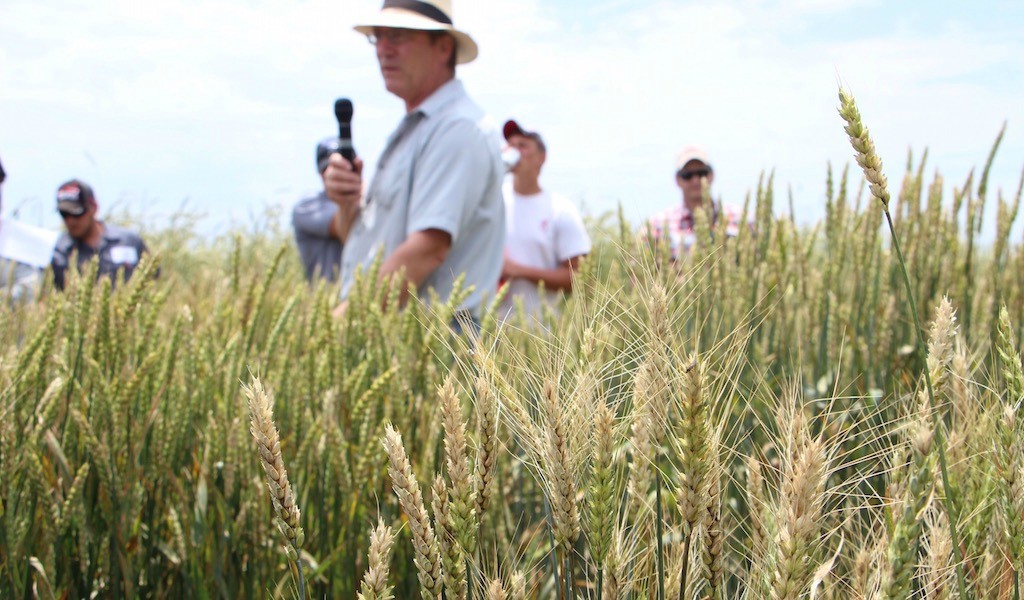 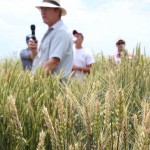 Clay Sneller, wheat breeding and genetics specialist at OSU, talks to attendees of the Small Grains Field Day in Wooster, June 14, about disease resistance. In his “Scab Nursery,” Sneller infects wheat varieties with Fusarium Head Blight (or head scab) in order to test each variety for resistance. Head scab, while common in Ohio wheat fields, has not posed a substantial threat in commercial fields. (Catie Noyes photos)
2 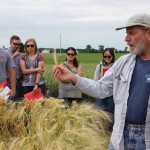 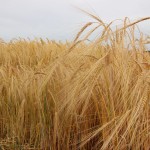 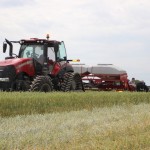 Ohio State researchers and extension specialists show area farmers the potential for intercropping soybeans and winter wheat during the Small Grains Field Day. Here, soybeans are planted directly into a field of standing wheat at the Schaffter research farm.
5 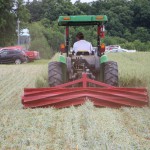 Crimping and rolling is another method of intercropping that can be done by rolling wheat and then planting soybeans or vise versa. This is a popular no-till method used often in organic systems.
6 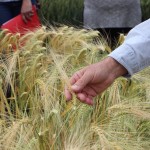 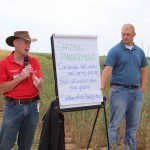 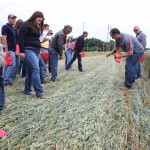 Attendees to the small grains field day got an up-close look at freshly crimped winter wheat.
9 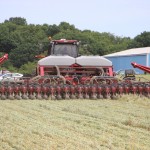 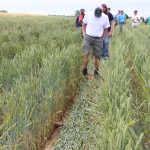 After the planter made a pass through the standing rows of winter wheat, field day attendees could see how soybeans where intercropped.
11 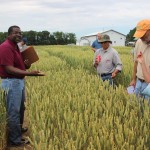 While OSU wheat breeder Clay Sneller tries to infect plants with head scab in his plot, Pierce Paul, a plant pathologist at OSU, works just a few plots away trying to kill the disease. Here he shows different treatment options for head scab in wheat.
12 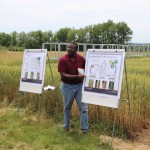 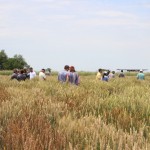