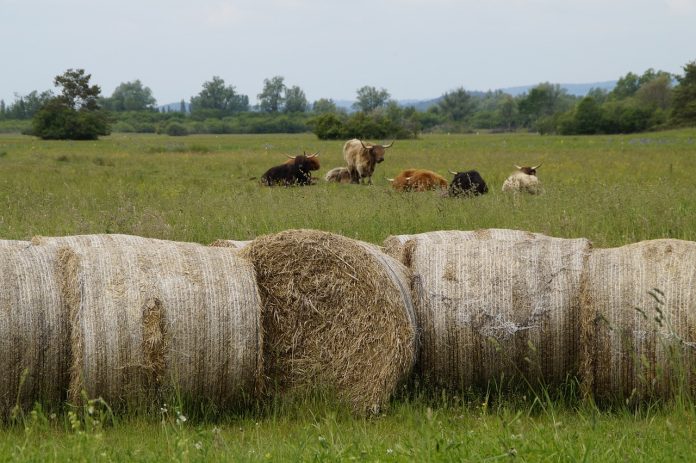 On one of the farms I rent, there is a nice hayfield on top of the ridge. I pulled soil tests in spring of 2020. The field called for lime and nutrient levels were low. I applied lime shortly after making the hay in 2020.

I only take one cutting off of the field. The field is fenced, and there is a good spring to provide water. I hauled enough hay off to fill the barn on the property. The rest of the hay I moved to the top of the ridge.

Bales were placed about 30 feet apart. I did rows of six. Then, we put up temporary fencing around the bales. The rest of the field was grazed in early October, and then cattle went back through the rotation again until the week of deer gun season.

We turned the cows in the Sunday of deer season. We gave them access to the first six bales. For the first couple of weeks, they grazed more grass than they did the bales.

As they started to eat the bales, they cleaned it up really well. Six bales a week continued to be enough through the whole two months they were there. The last row was fed the first week of February.

In March, I took the drag to the field and ran over the area several times. There was very little waste on the ground. I was able to scatter the little bit of waste out.

Since the winter was not as wet as the previous three or four and it was on top of the ridge, the cattle did not track the field up. And since there was not a tractor taken up there all winter, there were no ruts.

I know a lot of hay was wasted to feed this way, but it improved the forage production on the area.

I applied 19-19-19 on the field where no hay was fed, and it still did not compare to the forages where I bale grazed. The grasses were much taller and thicker, with almost no ironweed in them. When I mowed the hay, the area was not rough. There was no difference from the rest of the field.

I stacked rows of hay the same way this year, just more of it in a different location. The field is big enough that it will take several years to get it all covered.

This is not a complete substitute for fertilizer but it will reduce the requirements some. Instead of taking all of the nutrients to the pastures that already have adequate levels, the nutrients stay on the field.

Since the cattle were on a clean field without mud most of the winter, they stayed in good condition all winter. Grazing until December probably helped with that too, but they did not use a lot of energy since they didn’t have to walk in mud.

This method of feeding is probably not going to work for everybody. With the cattle at home, we keep as much hay that will fit in the barn as we can and it is fed in rings or unrolled, depending on weather conditions. If you don’t have the hay to waste, it may not be a good method.

If this method is something you may want to consider, I would recommend starting small. Plan for a few weeks worth of feeding. You will have to see how much your livestock are going to eat and how often you have to move the wire.

As you get it figured out, you can add a little more every year.