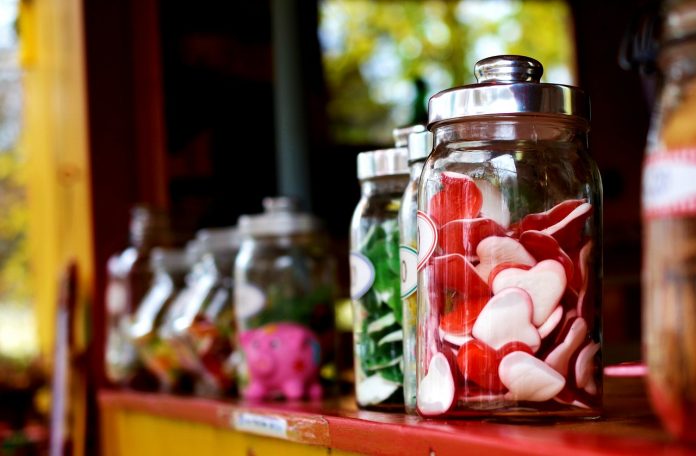 I was still young when the news came that a shopping mall would be built within driving distance of us, and just the thought fascinated us.

We were told the concept would be three-stories, the center of the mall wide open, complete with fountains, a wishing well, and so many stores we wouldn’t know where to start.

I worried that the rare trips to Montgomery Ward and its lovely candy counter might fade away.

Once in awhile, on a Friday night after cleaning up from the evening milking, we all would pile in the car and head for “Monkey Ward”, a store that seemed enormous beyond measure.

The candy counter in the center of the store was nirvana. Polished glass bins filled with some of the most beautiful offerings known to man, it was hard to take our eyes off of it all.

As my sisters got older and went in search of new interests, Dad would offer me his hand, and I would latch on to one finger.

Brach’s nougats, the white rectangle with colorful dots of jelly, was usually on his wish list.

He liked a maple candy, round and chewy-hard, fragrant in a way that other candy was not, was one that he never had to worry about sharing. He loved orange slices, soft and juicy and dusted with sugar.

The colorful all-day suckers fascinated, but never landed in our treasure bag.

Dad would gravitate to the salty cashews, a small bag of chocolate covered peanuts, then wrap up his purchase.

We would walk around a bit, then meet up with Mom near the furniture section.

“Try this one,” I remember Mom saying, and he sat in a new reclining chair. The only other chair I’d seen that had a pop-out foot rest was at a great-uncle’s house and because that chair could spin, too, I thought that meant he was incredibly modern and wealthy.

When the adults weren’t looking, with one kid on the look-out to whisper the warning, “they’re coming!” we would take turns spinning in that chair til we were so dizzy we’d crash to the floor.

We knew we were bad for being so daring. In the end, every time, Dad would say, “No, I still like my old easy chair.”

That worn-out chair did not rock, or spin, or kick out anything cozy. But, it was just right for a kid to squeeze in beside him while he read Successful Farming or watched The Red Skelton Show.

When the big mall finally opened, we took in the sights and sounds and thought we’d landed in a whole new world.

Eventually, Montgomery Ward closed, and candy counters faded away. I’d be willing to bet, though, they live on in lots of memories.