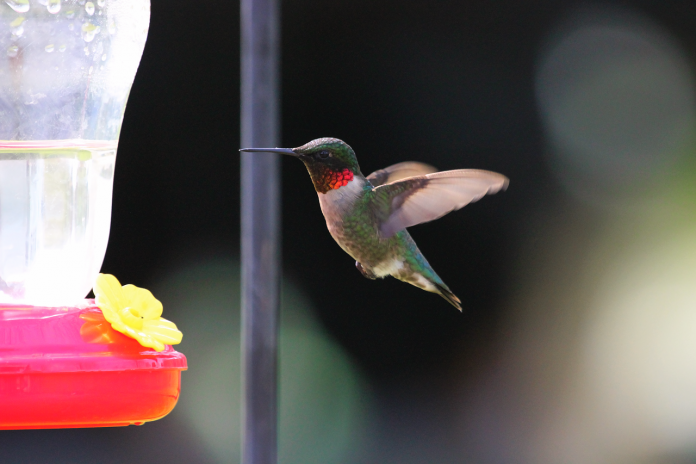 Ruby-throated hummingbirds, tiny wonders of nature that weigh less than a nickel, will soon return to a backyard near you. Perhaps you’ve already seen one of the early returnees.

The first hummers usually arrive on the Gulf coast in February. This year the first hummingbird arrived in south Texas on Feb. 22, followed by early birds in southeast Texas (Feb. 24) and the Florida Keys (Feb. 25).

Hummers have been racing northward ever since. By April 10, hummers had reached as far north as central Iowa, southern Wisconsin, central Michigan, central New York, and all along the east coast to Massachusetts.

They have also returned to much of Ohio, West Virginia, and eastern Pennsylvania.

Since 1997, Lanny Chambers, a Michigan-based hummingbird enthusiast, has run a website that relies on volunteer citizen scientists to report the first hummers they see each spring. Check it out at www.hummingbirds.net.

Thanks to this map, which is updated daily, I expect to see a hummingbird by the time you read this. I usually hang a nectar feeder on the back porch on April 15th; the earliest record I have for a hummingbird is April 22.

But I made my first batch of nectar and hung a feeder last weekend on April 9. Male ruby-throats usually return about a week before females. If you haven’t yet hung a nectar feeder, do it today.

Do not use honey; it can harm or even kill hummingbirds. Red dye is unnecessary, and it can also harm hummers. Nectar feeders are red because that’s the color that catches hummers’ attention.

If you’re offering nectar for the first time, enhance the feeder’s appeal by tying an 18-inch length of red ribbon to the feeder.

For now, one or two feeders will suffice. In the spring before nesting begins, I expect just a few hummers to visit my feeders each day. But when young leave the nest in July, feeding stations attract females and young from surrounding areas.

From mid-July through August, I can usually count 10 to 20 hummingbirds (and some years many more) at my feeders. I’m often asked if commercially prepared nectar is better than homemade nectar. Boxed mixes are OK, but they are expensive compared to ordinary table sugar.

I prefer to make my own nectar. Furthermore, boxed nectar mixes may advertise that they are “fortified with vitamins and minerals,” but hummingbirds satisfy their nutritional requirements from natural foods, including soft-bodied invertebrates such as spiders, aphids, and flies, which make up at least 50 percent of their diet.

Other products that might tempt you are jugs of what appear to be premixed nectar. But read the label closely; you’ll find that some of these products require added sugar. Such products are just colored water that lacks the most important and expensive ingredient.

Feeding hummingbirds isn’t necessary. Hummers can find plenty of natural foods. We offer nectar to attract hummingbirds to places where we can watch them simply because we enjoy them. Another tip to pull in the early arrivals is to place one or two hanging flower baskets on the porch near feeders. Colorful flowers, especially red ones, may attract attention when a single feeder does not.

Later in the spring, a variety of potted flowering plants on the porch or deck attracts attention as well. And when fruit spoils, don’t throw it out.

Place it in the hummingbird garden. Fruit flies and other small insects will quickly be attracted to rotten bananas, and hummers eat these soft-bodied invertebrates. Insects provide the protein and nutrients that nectar lacks.

The best way to attract hummingbirds is to plant native, nectar-bearing flowers. Trumpet honeysuckle is a hummingbird magnet; other nectar-bearing plants to look for at native plant nurseries and garden centers include trumpetcreeper, cardinal flower, scarlet bee balm, eastern columbine, and spotted jewelweed.

Invest in native plants for a hummingbird garden, and it will pay dividends for years to come.