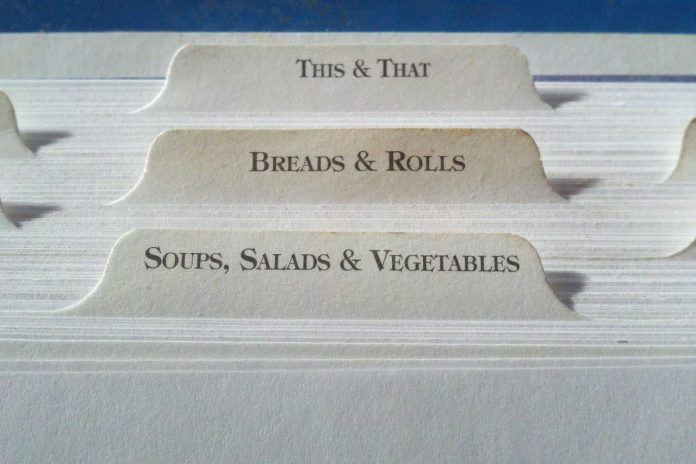 There are various ways of looking back, finding our family, catching a glimpse of how life was once lived. For me, in recent weeks, a little brown recipe box held what I was searching for.

I have written of my aunt, my father’s sister, who died at 35. Marilyn was a gem in the kitchen and loved baking sweet treats most of all. I went in search of her recipes, and though I didn’t find the one I had hoped to, I found even older dishes that certainly pre-dated my aunt.

Many of the oldest recipes, perhaps from the 1930s or before, were typed on yellowed cards, likely someone’s idea to better preserve them, the edges battered and browning with age. Hand-written recipes, in my aunt’s lovely, tiny cursive, mean much more to me.

One recipe that caught my eye was “Suet Pudding,” and it is noted to be a butchering day favorite. It required 1 cup of suet, raisins, sour milk, soda, cinnamon, cloves and molasses. The raw, hard fat of beef found around the loins and kidneys is the suet called for in this recipe.

Tucked right behind that one, a recipe for “Sugar Cure Meat” is handwritten in the cursive hand of my father’s paternal grandmother, gone before I arrived in the world. She was a no-nonsense woman who moved with swift precision. Dad said he learned to stay out of her way, as she was a tiny, whirling dervish who knew how she wanted things done.

Her recipe for sugar curing meat called for 5 cups brown sugar, 3/4 cups salt petre, 10 cups of salt and 2 cups pepper. “For 2 hogs” is noted on the fading card.

Apple butter was a family favorite in my father’s youth, and required “18 gallon cider, 18 gallon apples and 25 pounds of sugar.” Noted beneath, “2 1/2 bushels of good apple will make 13 gallons.”

No one went to the store to buy ketchup in the 1930s. The old recipe file held a card for “Catsup,” which required 5 quarts of tomato pulp, rubbed through a sieve. Onion and mixed spices, “chopped and tied in bag,” sugar, vinegar, cinnamon, black pepper and salt completed the list. This was cooked slowly over fire, stirring frequently until thick.

I find the wording of old recipes fascinating, calling for a “speck of salt” or “a wee pinch of pepper” and “only top milk,” which would be cream. My aunt made a point of requesting desired recipes and noted who provided them. I can picture her sitting at the kitchen table, writing these out with care.

One, for coconut snowballs, came “from Glenna,” a family friend I’ve heard stories about all my life. Another, for mayonnaise cake, is “from Dimp,” my mother, a nickname she carries to this day.

My father recalled butchering day as one of hard work but “the best eating, fit for a king.” Many of the oldest recipes revolve around the ingredients gleaned from butchering.

Mincemeat pie would not have been made on butchering day, but Dad spoke of the happy realization that it would soon be possible. Many years later, my mother-in-law, Edie, heard my father speak of this.

On a beautiful autumn day, Edie and my father-in-law, Don, made the drive from New London to Jeromesville to deliver a freshly made mincemeat pie to Dad. It was a gathering of good, kind, happy souls, reminiscing about the days of old. Fresh coffee, stories and laughter flowed.

Mincemeat pie made to perfection brought a tear to my Dad’s eye as he sang my mother-in-law’s praises. Later, in telling me about that day, Dad was still amazed by the gift and the work that went into such a beautiful gesture.

He said, “I lifted that fork, and it took me right back … she made that pie with a whole lot of love, and it was there in every bite.”